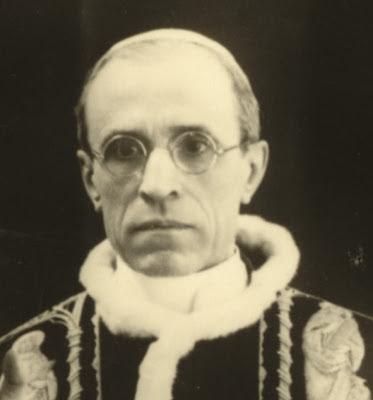 from Cathcon
".... the Vatican intervened in the UN vote to establish the Israeli state through the auspices of Francis Cardinal Spellman. When the vote seemed in doubt a message came from Rome (Pius XII was still Pope) for the cardinal to lean on the ambassadors from Central America, whose positive votes decided the issue in the Zionists’ favor."

Further from J Derek Holmes The Papacy in the Modern World
"In January 1940 Dr Josef Müller, who was personally acquainted with the Pope, approached Pius XII on behalf of a group of German generals who were planning a coup d'etat against Hitler. The generals wished to make contact with the British Government in the hopes that the Allies would limit their military activities before the coup took place and promise to make a reasonable peace afterwards. The conspirators, whose plans were effectively defeated by the German military successes in France, were allowed to use Vatican officials including the Pope's personal private secretary, the German Jesuit Robert Leiber, as intermediaries with the Allies. However the British Government in particular was rather sceptical of these approaches and refused to promise or to discuss anything until Hitler had been eliminated. During the nine months of the 'Phoney War' the Holy See made three further efforts to mediate between the two sides but the Pope, and to a lesser extent the United States Government, did not seem to realize that it would have only been possible to re-establish peace at the time by accepting and recognizing a greatly enlarged and strengthened Germany."

Dr Müller was later arrested and interrogated by the Nazis 200 times and gave away nothing- being then sent to Buchenwald and Dachau.
After the war, having almost miraculously survived, he became one of the founders of the CSU (the ruling Bavarian Conservative party) and then Bavarian Justice Minister. His nick-name was "Tough Leather" - Ochsensepp. (lederhosen leather so tough that it could be used by an ox) .

After the war, Pope Pius received Dr Müller at a private audience, thanking God for Müller's miraculous survival, stating , "We have contended with diabolical forces."

Precisely what more Pius XII could have done is unclear. He only tried to organise a coup against Hitler!
at March 01, 2008

I remember reading that when the German army occupied Rome, Pius XII planned to abdicate rather than allow the Pope to be taken prisoner by the Nazis if they invaded the Vatican.

But I'm not sure the story is true, and in any event it didn't happen !

He did much more , read Rabbi David Dalin "The Myth of Hitler's Pope" in which a good Jew decisively refutes slanders spread by renegade Catholics and Communists. It really is time the nonsense began by Hochuth in "The Representative" was finally stopped. Respectable Jewish historians such as Martin Gilbert reject it completely.

I look forward to the eventual canonisation of Pius XII. He was the first Pope I ever saw. I went to Rome for the Holy Year of 1950 with the Catholic Boy Scouts of England. We had a special ship to take us across the channel and two special trains to take us from Calais to Rome. We stayed at a special tent city which had been set up in Tre Fontane. After Rome we went on to Kandersteg in Switerland which belonged to the Swiss Boy Scouts.
I had never been overseas before and I have never forgotten it. Neither did my brother (RIP). We went together.