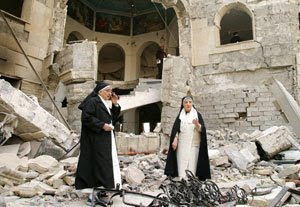 Christians had been fleeing Iraq for years before the U.S. invasion in 2003. The ancient Assyrian Church of the East saw four-fifths of its members emigrate before 2000 and its ancient patriarchate transferred to Chicago. The government of Saddam Hussein persecuted the Assyrians because of their resistance to Arabization and adherence to their traditional language, Syriac. Now other Christians who survived under Saddam have succumbed to the combined pressures of radical Islam and the chaos of war. More than half the remaining Christian population has fled Iraq since the U.S. invasion.
The vulnerability of Christians became more evident Feb. 29 with the kidnapping of the Chaldean archbishop of Mosul, Faraj Rahho. Despite the apparent decline in violence following an increase in U.S. troops with last year’s surge, there has been no letup in the pressures on Iraqi Christians. The depopulation of the churches continues; hundreds of thousands of Christians now live an uncertain existence as refugees in Jordan and elsewhere, with no path to a better future. In the last year, many of those who hoped to remain in Iraq had moved to the relative quiet of northern Iraq, where Mosul is the major population center. The high-profile disappearance of the archbishop may prove the fatal blow to the Christian presence in Iraq.
The churches of the Middle East are the inheritors of rich religious traditions in liturgy, theology, spirituality, language and culture. Prior to the U.S. invasion, Iraq was home to an array of Christian communities. Some Assyrians, members of the Church of the East, remained. The largest Christian church consisted of their Catholic cousins, the Chaldeans. In addition, there were Syrian and Greek Orthodox, Latin (Roman) as well as Melkite (Greek) Catholics and evangelicals. The disorder that followed the American occupation increasingly made Christians victims of violence. Their businesses were burned, their churches bombed, women harassed and priests murdered. Now they are deprived of their homeland, a disabling blow to the identity of people who take pride in their heritage. The loss of historic variety, as these eastern Christians either languish in exile or assimilate to foreign cultures, diminishes the world Christian community, including the Christian West.
In general, crimes against Christians have been perpetrated by jihadists and xenophobic criminals unleashed by war’s chaos. In the long term, the surest route to security for the region’s Christians lies in a peace that includes not only a political settlement but also the ascendancy of moderate Muslims and the taming of radicals. This is true not only of Iraq but also of other war-torn countries in the region, like Lebanon and the Palestinian Territories.
In addition, a wiser, less bullying foreign and military policy on the part of the United States is in order. The invasion of Iraq, the U.S. backing for Israel’s war on Hezbollah and the U.S. failure to be an honest broker in the Middle East peace process have accelerated the flow of Christian emigration from the region. In Iraq, where domination by force had failed atrociously, the surge has had modest success because it combines a restrained show of force with on-the-ground diplomacy and civil-political initiatives.

The lessons of General Petraeus’s counterinsurgency strategy need to be applied more broadly to U.S. policy in the region and to the U.S. alliance with Israel. The American public also needs to discourage politicians who posture about security. In moments of crisis, preserving an image of toughness inevitably increases pressure to do the wrong thing. Such falconlike thinking led to the Iraq war, the Israel-Hezbollah war and, predictably, to the crisis Christianity now faces across the region. What is needed instead is a sober realism that understands the place of justice and the perception of justice, as well as of the use of limited force, in securing a peaceful and stable world.
In the meantime, the United States owes a debt of honor to grant admission to Iraqi refugees who are unable to return to their country, Christians chief among them. Given the pool of two million refugees, the projected admission numbers (7,000 for 2007) have been paltry; and the low number of actual admissions (1,608) is a disgrace. In the wake of the Vietnam War, the United States was able to absorb 760,000 Vietnamese refugees. Where strategic interests are involved, as with concern for Soviet Jews during the cold war, admission is a high priority. Today the United States bears significant responsibility for the displacement of the Christian population from the Middle East. It can make amends for its offense by setting much higher admissions quotas for Iraqis to enter this country, by supporting countries like Jordan, which bear the burden of hospitality for the émigrés, and by working with other countries for their resettlement.

Amen. But I wouldn't count on it happening.

". Today the United States bears significant responsibility for the displacement of the Christian population from the Middle East."

Since when is "C" responsible for the sins of "B."

I'm not buying it. The so-called "moderate" Mohammedans, brought it all down on everybody by allowing Saddam in power in the first place.

EuroPEONS in general feign horror at guns, but if a few more people had used them when Saddam and his henchmen were running roughshod in the first place, none of this crap would have happened. The Iraqis brought that down on themselves.

They so-called "moderates" are afraid of the radicals. It's ENTIRELY, 100% THEIR fault that the US came after them. Apparently they thought we were just going to sit there and say "oh, well."

Kill the snakes before they kill you.

And why would anyone in his right mind even CONSIDER supporting Hezbollah? They are pure EVIL.

Any Christian who thinks the Mohammedans will protect the Holy Land better than the Israelis is seriously out of his mind and needs a huge reality check.

Oops, meant to say that was amongst the stupidest things the magazine "America" has said. Not "you."

You have some serious & have to say very depressing posts there Fr. Just shows how much we need to pray..

If those warmongers Bush & Blair had listend to John Paul II Iraq would be much better off, lets hope the next Us President concentrates on the many domestic issues of the US and leaves the rest of the world to sort out its own problems. ffn

ps I believe the terrorists responsible for 9/11 were from Saudi Arabia,how come Afghanistan & Iraq,"got nuked" ffn

" The Iraqis brought that down on themselves."

Oh come on. You can't hold a subjugated people responsible for THEIR OWN SUFFERING at the hands of a tyrannical despot!

There is no evidence that the Iraqi government were in any way responsible for the 9/11 attacks or any others on the US.

"They so-called "moderates" are afraid of the radicals. It's ENTIRELY, 100% THEIR fault that the US came after them."

The US/British intervention destablised Iraq but it is the peaceful Moslems who are killing the Christians. Just as they did in Constantinople in 1453. They are still singing from the same tune sheet.

Some European countries have been generous in allowing the Chaldean Christian refuge and like the other Catholic refugees who have preceded them, have helped to nourish the revival of the Catholic church where it had been virtually defunct since the reformation. So some good can come out of this diaspora.

Remember, Saddam was built up by the USA as an opponent to Iran. The same with the Taliban in Afghanistan, only they were called Muhajeddin freedom fighters when they were fighting against the Soviet occupiers. Don't complain now they have turned against you - the US should not have meddled in the first place.

The US and UK can not be policemen to the world. Like all police, they are liable to become a problem in their own right, and who will police the police? The US has an appalling record of support for oppressive fascistic regimes and subversion of socialist ones all over the world, especially in South America.

You and your countrymen might like to ponder the fact that Uncle Sam is widely regarded as a rapacious and violent exploiter, just as the Prophet is seen as depicted in the cartoon that showed him as a bombhead. And a plague on both their houses. The Yanks and the Brits should keep their noses out of other people's business. Aggressive Islamists need to be boxed in, but it is crazy to imagine that the US and Brits and turn them into democracies by sending armies in. And whilst on that subject, both countries need to learn a lot about running proper democracies themselves. The Brits in particular suffer from a severe democratic deficit, and the significant proportion of people in the US living in third world poverty conditions suggests that your country needs to look at itself in the mirror and stop meddling. And the same goes for the UK.