Pope: Secularism, even in the Church 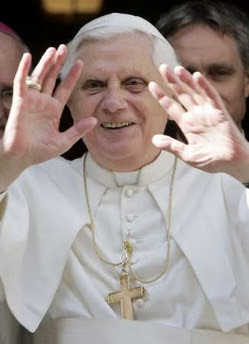 Asia News
Secularisation - living without God - is invading every aspect of human life, and for some time has stricken the Church itself. It is a tendency fostered by the consumerist mentality, with its tendency to superficiality and egocentrism. This is the cry of alarm raised today by Benedict XVI at a meeting with the Pontifical Council for Culture, which the pope asked to "react" to this situation, and, through dialogue with contemporary cultures, to bring back to them "the lofty values of existence". The pope first of all emphasised the Church's desire to initiate "dialogue with the cultural movements of our time", in which it has great interest. "Today more than ever, in fact, the reciprocal openness among cultures is a privileged terrain for dialogue among men and women committed to the search for an authentic humanism, beyond the differences that separate them". Referring to the theme chosen for the current assembly of the dicastery, "The Church and the challenge of secularisation", the pope then asserted that "the secularisation that is present in cultures as an arrangement of the world and of humanity without reference to Transcendence is today invading every aspect of daily life, and is developing a mentality in which God is effectively absent, in whole or in part, from human existence and understanding.
This secularisation is not only an external threat for believers, but has for some time shown itself within the bosom of the Church itself. It deeply undermines the Christian faith from within, and in consequence, undermines the lifestyle and daily behaviour of believers.
They live in the world and are often affected, if not determined, by the culture of the image that imposes contradictory models and impulses in the practical denial of God: there is no longer any need for God, for thinking of Him and returning to Him. And furthermore, the predominant hedonistic and consumerist mentality fosters, among both faithful and pastors, a tendency toward superficiality and egocentrism that damages ecclesial life". "The 'death of God' announced in past decades by many intellectuals gives way to a sterile worship of the individual. In this cultural context, there is the risk of falling into spiritual atrophy and into an emptiness of heart, sometimes characterised by surrogate forms of religious membership and vague spiritualism.
It is clearly more urgent than ever to react to this trend through a recalling of the lofty values of existence, which give meaning to life and can calm the disquiet of the human heart in its search for happiness: the dignity of the human person and his freedom, the equality among all men, the meaning of life and death, and of that which awaits us after the conclusion of earthly existence". The encounter with cultures and science, he concluded, "is greatly anticipated by the Church, but also by the scientific community, and I encourage you to pursue it".
at March 09, 2008

Plenty there to ponder!

Has he been reading the work of a recent convert, Edward Norman? He seems to have read everything else. Secularisation has almost destroyed the C of E, and is making inroads into the Catholic Church. A man -centred liturgy, a preoccupation with political causes, a shying away from the transcendent, are all symptoms.