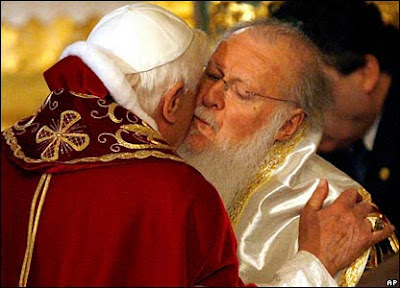 Philip Blosser has a very interesting piece of the Kiss of Peace, unfortunatey there is not direct link, so scroll down to Wednesday, March 05, 2008.
I have always felt that the contemporary handshake, offered without much thought or any committment, was a very poor substitute for the embrace of the Extraordinary Form of the Roman Rite. Blosser reminds us that the embrace itself was a substitute for the mouth to mouth kiss.

... the Tridentine pax preserved an already centuries-old tradition of ordered administration. In the 1962 Missal the priest kisses the altar near the Host (earlier rubrics have him kissing the Host itself) and then "kisses" the deacon who in turn "kisses" the subdeacon and so on. No one can give the peace who has not received it from someone else, including the priest, who has received it from Christ Himself.

* * * * * * *
The symbolism is both beautiful and clear. All true peace comes from Christ through the ministration of His Church. Grace cascades from the Eucharist through Christ's ministers to His people, forming what one author has called a "chain of love" that both binds and elevates.

the new rubrics do not presuppose a causal relationship between the two. No longer is there expected a hierarchical cascading of peace from the embty tomb that is the high altar; rather, in insctucting the congregation to offer the peace to each other, there is a more or less spontaneous eruption of peace in the pews.

Further complicating the new pax is the decision to let its gesture be determined by local custom.[13] In many respects this is not unreasonable, for there are several places that associate public kisses with lewdness.[14] Yet as we have already seen, what became the Roman form of the kiss can hardly be considered lascivious by even the most prudish culture, since not even the cheeks of the participants touch.

In America, the form that quickly came to dominate is the handshake. Again, prima facie this is not an unreasonable choice: as an indication that one is unarmed, the handshake is certainly as sign of peace. Unfortunately, though, it is a better sign of the peace that comes from the city of man rather than from the city of God. Handshaking signifies a truce or deal, the kind of agreement one makes in politics and business. It is not primarily a sign of love or intimacy. Indeed, unlike the kiss and every other sacred gesture, it has undergone no modification that would mark it as distinctive from the "profane" handshakes outside the liturgy, and thus it essentially retains its wordly resonance.

Moreover, a handshake is not a kiss in any form, and hence its liturgical use marks a break not only from a previously unbroken apostolic custom but from the rich cluster of meanings that came with it. It is for these reasons that a more pugnacious commentator than I might be tempted to conclude that regrettably, the current Roman kiss of peace is neither Roman nor a kiss nor about Christian peace.

The only hope for the handshake is for it to be given by both hands enclosing the closed hands of the recipient, and so transmitted. In this way germs are not so effectively transmitted, and the irredmediably secular connotations are left aside.

Anon, to me that is more of a way of "dominance" than equality, and whomever is the receipient one in the "handshake" certainly has the back of his/her hands swathed in any potential germs hanging around given. Icky. I'd be tempted punch out someone who pulled that business. You'll have parties trying to be "alpha dog." Not good! Face it, have you ever said "And also with you?" NO. Everyone wants to be the one who says "Peace be with you." There IS no response...because everyone wants to be the one to say "Peace be with you."

Although a handshake is less intimate than the old way of exchanging pax, it is also the way people make up when they have had an argument. I.E. A and B were feuding, and they apologize and decide not be be jerks to each other -- they often shake hands in offering an apology. So it doesn't exclusively have a "business deal" aspect to it.

I thought it was the Peace Sign of Peace. Silly me.

Or maybe it's the Hug of Peace... or the Back Slap of Peace.

On 'handshake of peace' question: Have you forgotten your Shakespeare? In Romeo and Juliette (Act 1, scene 5, lines 95-98) Juliette speaks: "Good pilgrim, you do wrong your hand too much. Which mannerly devotion shows in this: For saints have hands that pilgrims' hands do touch. And palm to palm is holy palmer's kiss."

I've never been too happy about handshaking with strangers because of the hygiene problem,sweaty palms are a bit offputting and make one want to run to the bathroom.Another good reason to take Communion on the tongue.