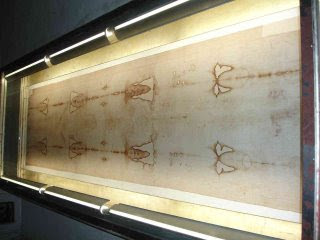 If you haven't yet seen the BBC's programme on this, you have five days to view it. Go here to watch it on the BBC's iplayer. It's compelling. And once again I think the BBC do these things better than anyone! When they do something, they do it well.

Yes it was compelling viewing. I know you are musical, Father, and wonder whether you saw the BBC 4 programme on Good Friday on the history of polyphony? That too is on BBC iplayer for a few more days. I believe it is the start of a series and next Friday will 'reveal the links between the papal intrigues.. and the music of Palestrina.' Sounds interesting!

Pelerin,
I kept the machine unplugged during Lent, thanks for the tip.

the mother of this lot said...

Thanks for the link Father. I was going mad because I had missed it!

It was a very good programme. I've read some of the Colarado research. There's a lot to the Shroud.

I just put this comment on Fr Boyle's site, but wondered if you had an opinion too, Father:

Father, I would love to believe that the Turin shroud is the shroud of Christ. What holds me back from doing so is the fact that it depicts the nails as going through Christ's wrists. I know that some 'experts' claim that this would have been necessary, but all the approved stigmatists, including St Francis and Padre Pio, have had Christ's wounds in their palms not in their wrists. Who/what should be believed: the stigmatists or the shroud?

I would be grateful for your opinion on this.

I was surprised that it was not negative (BBC bias combined with Muslim presenter). The only aspect they missed was the pollen analysis, although they were light on the 3D imaging and the light-flash nature of the image on the cloth.

I have seen an account which argues that the nails were hammered from the palm/base of thumb at an angle of 60% so as to go through the wrist bones. This allowed the body to be supported.

The marks on the shroud show the 'exit wound' of the nail, at the back of the hand/wrist rather than the 'entry wound' more in the palm.

Jim, I suspecgt that stigmatics receive the stigmata as the fruit of deep and intense prayer. The prayer is the important gift of God, the stigmata comes because of the heart and imagination being stirred by God and is therefore subjective, consequently the stigmata follows available iconography.
The stigmata and devotion of the heart and soul shows itself in the body.
The actual marks are not necessarily of God or even a mark of holiness.

Father, I think one can argue reasonably that NO stigmata come from God (though I would not agree with that argument), but if one accepts that some are from God (even if others are not) it does not seem reasonable to introduce a 'subjective' element such that those marks do not correspond properly with those of Christ.

Thank you Jim for your comments. I had not heard that suggestion before.

That Program was very well done, and I believe it is very authentic.

Father, when is the tea and coffee back, I miss it every sunday.

I recall it being reported that one of the well known stigmatists (S. Francis?) cheerfully admitted that "of course" Christ's wounds could not have been through the palms of the hands, or his weight would have torn the nails right through. Perhaps someone can correct me if it was not S. Francis? Regarding the theological status of the stigmata, I recommend this useful page.