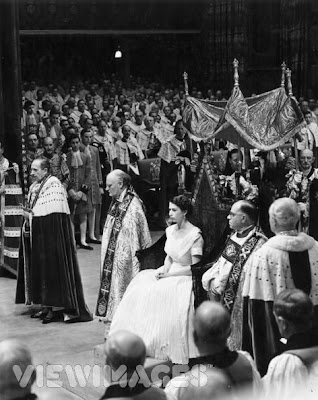 Gordon Brown and Buckingham Palace have been in talks about ending the 300-year discrimination against Roman Catholics in Britain which still prevents an heir to throne from marrying a Catholic. The BBC reports it here.

Is it about justice for Catholics? Most probably not.
or
Is it a move to disestablish the Church of England? Certainly.
Is that a bad thing? Most probably, as poor as many of the Anglican bishops are at representing mainstream Christianity, their presence in the establishment is at least a reminder that Britain once had a Christian heritage. It is the attack on our Christian heritage that seems to be a key priority of our government.
Overturning this obvious piece of discrimination could be Pyrrhic victory.

Spot on Father as usual.

I have always thought that the UK having a Catholic monarch (which may be possible after a reform)would be an overall bad thing. The Catholic monarch in question may have to give consent to morally dubious laws. Of course, because of our parliamentary system, the monarch's powers of veto are worthless in reality, and I wouldn't want an individual to be faced with not only a personal faith crisis, but a constitutional one as well.

Agreed. Labour is (a) panicking about the loss of its tribal vote, and (b) has a longer-term dis-establishmentarian agenda, which would only result in the cross being eliminated from all official British symbols and regalia except the Union Jack. (And even that may be vulnerable in the current madness).

By the way, what a pathetic sop to the British Catholic voter after being slapped in the face for 10+ years by a bunch of anti-Catholic politicians. Allowing the monarch to marry a Catholic is a bit like allowing millions of people to apply for a job that none of them wants.

Let's repeal the Act of Settlement and dis-establish the Church of England AFTER the re-conversion of England. Not before.

'Is it about justice for Catholics?'

I am sure that it is because the 'powers that be' have realised that they are rapidly losing the Catholic vote and they hope by doing this to retrieve it - as if it makes up for what they have already done to de-Christianise the country.

Incidentally I see that our Bishop is not particularly worried about the anti-Catholic goings on each year in Lewes. He is quoted as saying 'it is not worth making a fuss about because for the rest of the year there is no real sign of discrimination against Catholics.'

I wonder why Bishop Conry was chosen by the media as spokesman rather than Cardinal Corman?

I think your intuition that this has implications for the position of the Church of England is sound. The parliamentary website has an interesting research paper on this issue, which says, amongst other things, that:

We should also remember that it is not for nothing that, Dr Evan Harris MP, the National Secular Society's Secularist of the Year 2009 is supporting this proposal. As the NSS citation makes clear, he supports the removal of the blasphemy law for the same reason as well, i.e. because it "discomforts" the position of the Church of England.

I think the reforms suggested would allow the monarch to marry a catholic but not for the monarch to be catholic per se. As such the move shouldn't necessitate the de-establishment of the CoE but may path the way for such a move later perhaps.
I think you are rather ungratious about this move, it has been on the cards in principle for some time but has been sidelined due to the complexities which will have only a symbolic effect. I believe it will need agreement from all countries within the commonwealth, as well as a huge amount of parliamentary time which is quite a commitment from the government with little positive political outcome.
The driver appears to be a deal to allow Cardinal CMO'C to accept a place in the Lords, as well as a papal visit.
It's not clear from your post what you are quibbling about, are you not in favour of allowing members of the royal family to keep their succession to the throne if they marry a catholic?

Take all the crosses from the Union Flag and we are left with a plain white sheet only a matter of time before somebody cries DISCRIMINATION and we're left with a black flag.

Just a simple addition of the Skull& Crossbones and everybody will know who runs the country.

I'm sorry to spoil the argument with the facts, but the Act of Settlement is prohibits the Monarch from being a Catholic as well as marrying one. The Commons research paper mentioned in my previous post makes that quite clear.

As to whether Fr Ray is being ungratious (sic.), it is not the proposed ending of Catholic discrimination that is at issue here, but the implications for the Church of England. It is not "quibbling" to point out that the proposed reforms may have consequences which have not been thought through or made sufficiently explicit.

It's only a matter of time before the half crescent on the Union Jack, with the way things are going.

Will it mean we get all our monasteries and churches back wot that 'orrible 'Enry 8th nicked from us plus the usual mandatory politically correct apology from the head of state for all the suffering and loads of dosh in compensation???

No, I thought not. An empty gesture not worth the pomp and ceremony it's printed on!

Oh, am I right in thinking that Queen Camilla was/is Catholic???

Fr. Ray: I think you're absolutely right. The problem isn't so much a protestant Monarch marrying a Catholic (or someone in the line of succession) as long as the head of state becomes the head of the Anglican Communion it would be a problem for a practising Catholic. What about future childen of such a couple, the Catholic partner to do things right and in the faith would naturally not want to raise their children protestant, and you can't have a Catholic as head of the Anglican church. It's not good for the practising Catholic...if there still exists an established Protestant church. [Although it would perhaps put an end to, pardon the expression, STUPID conversions by people like Autumn Kelly.]

George, re: CAmilla, NO. Her first hubby was/is though AFAIK.

Personally I dont think its any of these things. I think that the Government are in such a dire state that they are looking around for anything that will be a distraction and take over the headlines for a short while.

Just a cynical attempt to pick up lost votes, like the invitation of the Pope. Anyway, Brown is toast and will be gone before the next election. The Queen has only to tell him that he isn't looking all that well when they have their weekly meeting. I feel sorry for the old lady having to be on her own with him in the same room, week in and week out. It must be an ordeal for her.

Of course it is also an attempt to dislodge the CofE. Suspect the worst of the Scoundrels of Westminster and you will probably be correct.

On the button, Father. Dis-establishment is the name of the game and Catholics will take the blame.
Internecine strife would serve an anti-Christian Government nicely. Job done.
It's crucial that none of our bishops accepts a seat in the Lords. How the heck would they vote on this issue?

SADLY THERE WILL ALWAYS BE DISCRIMINATION AGAINST CATHOLICS AND CHRISTIANS PERIOD. THATS OUR STRUGGLE AND OUR CROSS, BUT BY FAITH WE SMILE, WE WANT CHANGE BUT IF WE CAN'T HAVE IT, THEN THEY WONT GET THE BEST OF US, WE AS CATHOLICS MARCH FORWARD ROSARY IN HAND AND SAINTS ON THE MIND.

What is worse, to tell a prospective Monarch that he cannot marry a Catholic and be king

To tell the eldest child of a protestant Monarch and Catholic consort (who will therefore be catholic) that he must choose between his Catholic faith and the throne. I seem to recall this question caused a lot of fuss in the years leading up to 1688!

Yes Gordon, lets re-open the "Henrietta Maria" question and watch all the worms emerge from the can.

(From Wikipedia "Religious conflicts permeated Charles's [1st] reign. He married a Catholic princess, Henrietta Maria of France, over the objections of Parliament and public opinion")

There is a certain Spot The Deliberate Mistake quality to proposals to make the monarchy more egalitarian or (God help us all) "meritocratic".

The Act of Settlement is good for us Catholics. It reminds us that we are different, and it does us the courtesy of taking our beliefs seriously by identifying them as a real challenge.

I question the viability of a Catholic community which devotes any great energy to the question of ascending the throne while the born sleep in cardboard boxes on the streets and the pre-born are ripped from their mothers' wombs to be discarded as surgical waste. Far from being a term of abuse, the word "Papist" is in fact the name under which the English Martyrs gave their lives, and expresses the cause for which they did so, making it a badge of honour, to be worn with pride.

The Protestant tradition is a fact of this country's history and culture. No good purpose would be served by denying it its constitutional recognition. And we must never countenance alliance with those, such as Evan Harris, who wish to remove Christianity as the basis of our State. Parties, such as his or the SNP, that wish to abolish Catholic schools need not imagine that noisily seeking to repeal the Act of Settlement somehow makes their position any better.

As for male primogeniture, it, too, sends an important signal: that the male line matters means that fathers matter, and that they have to face up to their responsibilities, with every assistance (including censure where necessary) from the wider society, including when it acts politically as the State.

On matters such as this, we should listen to the voice of Recusancy, currently in the Commons (and it has been largely "reformed" - what an appropriate word! - out of the Lords) the voice of the gloriously anti-war Edward Leigh more than anyone. He has no time for this proposal, and rightly sees the whole thing as an excuse to bring the question of the monarchy to the floor of other Parliaments, particularly in Australia.

There is only one circumstance under which these changes could begin to be justified, namely that any Realm or Territory may leave the family defined by our shared monarch unless they were given effect, though not otherwise. Which is considering doing so?

If more of us were like Barry & Margaret Mizen there would be a lot less Anti-Catholicism and the World would be a better place.

Very well put. I am copying this to my own blog.

The day the CofE is disestablished is the day England ceases to be a Christian nation. ALL Catholics should see that as a terrible thing!

I'd rather die in a ditch than see the dear old CofE disestablished. And I'd count myself as a martyr for the Faith if I did so. Our Anglican brothers are heterodox but they're still good Christian people.

(You've always got friends over the Tiber!)