Seperated by an Ocean 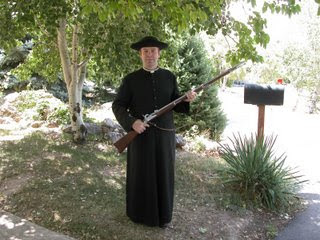 An American priest glorying in his new rifle!
On the Side of Angels takes on the normally sane, intelligent and astute Fr Jim Tucker over his support of firearms and his ridiculing of our own British anxieties.
When I read some American blogs I am amazed at their eloquence about Life, or at least Anti-Abortion issues and revolted by their support for the "gun lobby" and the death penalty, a strange juxtaposition. Americans don't seem to understand that althgough guns don't kill people but people with guns, actually, do.

Thanks for their names Fr.

Illegal guns kill as they are usually owned by criminals, who don't much care about getting them registered, being criminals and all. In Washington D.C. handgun ownership was illegal for all, and it is the worst City in the country. Legal gun ownership is healthy and sane, and cuts down our reliance on "Big Brother" State for protection. A disarmed populace is a perfect justification for having 25,000 police officers (like here in NYC)roaming around. Anything happens, call 911, and cross you fingers. Silly. One of the few good things left in "New America" is our right to bear arms. Hopefully you Europeans wake up before the EU stormtroopers enforce "tolerance" with jailtime.

Americans are mad. Nice, most of them, but barking mad - with a bottomless capacity, or so it seems, to fetishise and obsess along the most bizarre and illogical lines. It's not for nothing that sedevacantism also flourishes there as nowhere else.

Ken, my dear, I think you have just illustrated Moretben's point.

Oh Father, I'm not mad, but you Euro's are too trusting. I don't care for Govn't nursing and "protecting" me from cradle to grave. If/when society breaks down (Ex:LA riots, increasingly Muslims in France, Katrina in New Orleans)then what happens?

Ken, maybe I am being unkind, but I think we Europeans cannot understand your American bloodlust, to us it is madness. We are shocked by the deaths of a few, you seem to take it as part of the course.
You leave the poor to sink or swim and think us mad for wanting to support them.
Could it be the difference in the origins of our societies; one evolving, essentially, from Catholicism, the other being the construct of Protestant Enlightenment thought?

I'd like to see some Nazis or Communists types, or fanatical Muslims try and kick our doors in and haul us off to whatever hell-holes they can concoct. Ain't gonna happen here.

All I need to know about eurrup was that the first thing fanatics try and do is grab guns. Wouldn't be so easy to march Jews and other "undesireables" off to the gas chambers. A government which doesn't honor the right of the people to protect themselves is not to be trusted.

If the British hadn't have tried to seize the arms caches at Lexington and Concord, you folks could vacation in Hawaii or Florida or wherever without a passport.

I may be American, but I agree with Moretben, on this one. Barking.
I hear gunshots, legal and otherwise, at least once a week.
Most Americans should ponder the old line "if we could see ourselves as others see us."

I'm just gonna sit back and let y'all have at it, but I'm not sure where you get the idea that we're all pro-blood, pro-death penalty.
;)

I once spent a long weekend "dog-sitting" for a young relative in her Washington DC suburb. It was a very interesting experience, but it didn't feel much like "freedom" to me.

"first thing fanatics try and do is grab guns"

Of course they do if they are available in society


"and other "undesireables" off to the gas chambers"

"hell holes"
that is what American bloodlust has made Iraq

I think many are mistaking the Pro-Self-Defense position as something akin to American Neo-Conservatism. Nothing can be more inimical. The Neo-Cons are war mongering statists,who would happliy disarm the entire coutry. They fear the American people, Thank God. A healthy Democracy! I have never supported this sickly War.

Again, Illegal handguns are what you hear in Urban centers. If we got rid of every gun in America, there would be massive upswing in stabbings. "But the things which proceed out of the mouth, come forth from the heart, and those things defile a man". There's the root of if it.

Socialism seems like Gov't mandated Pelagianism. Cultural Alchemy, find the right formula, and all will be fine.

As far as our unfortunate venture in Iraq : Father, I do believe some Brits are over there also, are they more virtous, and not involved in turning Iraq into hellhole? Or only "mad-dog" Americans? (Funny I remember the Brits used to be known by that moniker, what happened?)

Ken,
As far as far as the phrase "hell holes" are concerned I was quoting Gem of the Ocean.

Certainly some of our British leaders were complicit in creating them, some of us even half believed the lies we were told by our then Prime Minister, that Iraq had weapons of mass destruction, deployable in 45 minutes.

Is this a bad place or time to promote the
St. Gabriel Possenti Society
http://www.possentisociety.com/default.asp

Help us make him the Patron Saint of Handgunners :)

The Anonymous correspondent, who began "Fr., I notice a virulent ..."
I have deleted your comment, it is just off the wall, though it does illustrate my point.

This discussion is a hoot. I'm with Father and moretben. And the patron saint of handgunners! That's hilarious, while also disgusting.

I wonder what St. Gabriel would have made of the use of his ability to use a handgun, by people who insist everyone has a right to own automatic assault weapons and rocket launchers?
By the way, at least half the shots I hear in my neighborhood are from "law abiding" registered gunowners getting drunk and shooting up the bar down the road.

What many of my fellow Americans can never understand is that society is not divided into criminals and non-criminals, or good and bad.
Good people can do bad things. If you have a gun around and you are angry - watch out!

I thought I would comment here...I don't own a gun and am further North than America where we are experienceing the results of too-tightly controled weapons.
Part of the problem is: criminals are going to own weapons and you can't really stop that. So why shouldn't lawabiding citizens have the means by which to defend themselves?

Contrary to what some commentaters on this blog seem to believe, most of the shootings in NA are committed by criminals (eg. people who are out to rob a jewelry store)whose guns are not registered. If more people owned guns, robberies would likely not occur as often as well as a number of other crimes.It certainly seems that a potentialy armed victim would deter criminals.

People should have the right to own weapons...most of the population is not insane or barking mad... When we form a utopia there will be no need to own a gun.