We English don’t go in for this sort of thing 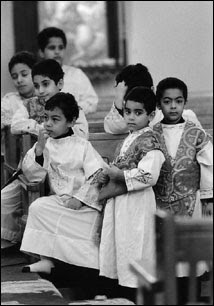 I was walking past a newsagents yesterday and a young man ran up to me greeted me and kissed my hands. Very occasionally elderly Ukrainian Catholics do this, I remember on one occasion protesting when an old man did it, his reply was, “Father I don’t know you personally, if I did, it might be that I disliked you personally but you have touched the Body of Christ, it is for love of Him, that I kiss your hands”.
This particular young man told me he was a Coptic Orthodox deacon, he had fled from persecution in Sudan, like so many of his compatriots in Brighton. He had come here because there is a Coptic Church here.

I remember years ago talking to the late Fr Michael Hollings, a gloriously liberal, in the proper sense, and holy priest. We were talking about how appalling seminaries were, he said he would abolish them and replace them by re-instituting the old minor orders of porter, reader, exorcist and acolyte, as well as tonsure and sub-deacon and put young men through these, with the proper training before teaching them theology and philosophy properly and ordaining them to the diaconate and priesthood, so the approach to the priesthood would be a gradual process. This seems, I think to be what happens in the Coptic Church, most older boys and young men are ordained to something without necessarily ever ending up as priests or even deacons, like this young man. This means that they go through a period of spiritual direction, discernment and formation even in their teens. Which means that rather than going through programmes, as we have in the west, they have a process of formation.

For us in the west this would cause problems, as like all Apostolic Churches these orders are not open to women, for the Coptic girls and women seem to join the choir. In the Coptic church, here in Brighton, there are two choirs, a liturgical one, of boys and men who sing the Liturgy proper, with drums and rattles, and a devotional one with an electric keyboard who sing devotional songs during the Liturgy. In some Eastern Churches I understand that girls or women too go through a process of formation linked to temporary consecration of their virginity, which is ended with marriage, and may be restarted on widowhood.
at August 16, 2007

Interesting you mentioned re: still occasionally seeing the custom of hand kissing. My mother told me that in the 30s and 40s in the US (I'm not sure if also later) she (and certainly her parents) would kiss the priest's hand if he was encountered in the street. [And yes, the background was Ukrainian.) I expect this certainly reminds the priest "who he is."

Dear Father, 'sort of thing'! Methinks you are might be a little tired - maybe you need a day off from all your excellent blogging activities?

'sort of thing'
I have correct it, thanks, its a touch of dislexia, "sought of thing indeed".

I've put in my tuppence worth regarding seminaries as well, and would appreciated some more cool headed responses/ contributions - I got a bit carried away and would hate any external to the church reader to think it was as bad as I portrayed it...

Occasionally, when I greet one of our priests on the steps of the church, I will kiss his hands. I know I'm not the only one who does this - I see it all the time.
I think it is a beautiful gesture, and never have I perceived any discomfort on the part of the priests.
After an ordination, when we go to the altar rail to receive the priestly blessing, we kiss the new priest's hands, so why not any other time, as a greeting?
We are, after all, not kissing his hands so much as we are kissing the throne upon which Jesus sits during every Mass.
Just my two cents, and I would never do this to a priest I did not know personally, in case it would cause him to be uncomfortable.

I am a regulas reader of the New Liturgical Movement and about a month or so ago some one was describing precisely that stepping stone process of advancing to the priesthood. I have tried to find the reference but cannot. I know that I gave a comment, saing that I received Minor Orders all at one go, not in stages as they were suggesting (and as you have suggested). As things were then, one did two years Philosophy and then one year Theology and then one received Minor Orders.Sub-deacon came after four years and Deacon after five. It was of course, after six years that one was Ordained.
The matter of minor orders was that one received tonsure on one day and the minor orders on the next.
It goes without saying that we all wore cassocks all the time and only at holiday time did we wear "civies". I am talking about The English College, Lisbon which does not exist any more. In those days there were about 50 of us.

It is also customary in southern Italy for the faithful to kiss the hands of the priest. It is an expression of pietas — reverent and dutiful affection — and I have no problem accepting it.

Another thing. I too regret that I was deprived of receiving the venerable Minor Orders. I do remember being told that acolytes could function as subdeacons and wear the tunicle at Solemn Mass. There are a few places where that is done.