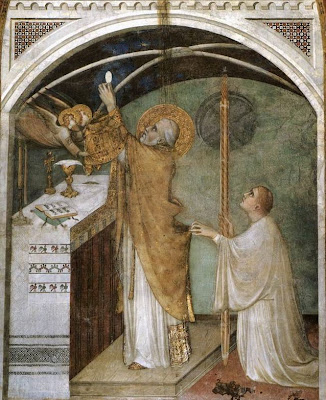 I have been celebrating Mass in my dining room whilst the Church floor is being sanded, filled, sealed and varnished. It has taken far longer than I thought it would, the benches go back into the Church on Saturday and are taken away again on Monday, it is a bit tedious. Varnishing is going to take place next week the final coat takes three days to dry.
I have been celebrating Mass facing "the altar", well actually my sideboard, there is an altar stone in the central draw, and a few other relics but it has got me thinking about the "terms" we use. 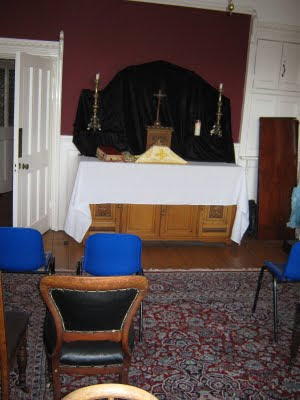 ad orientem - facing east, the place where Christ will come in glory like the dawn, where salvation will come like the rising sun.
ad apsidem - to the apse, not all churches (or dining rooms) face east, so this term means theological east.
against the wall - contra murum - a bit derogatory but so too is the opposite, westward facing, contra populum - against the people.
cum populo - with the people, the priest and people facing the same direction.
ad Dominum or ad Crucem - to the Lord or to the Cross -the "Benedictine arrangement" where the crucifix becomes the centre of attention whichever direction the priest is facing. It is bit of a halfway house, as the altar, not the crucifix, is consecrated to be "the" sign of Christ.
Mulier Fortis has an interesting slideshow of Mass at Blackfen being celebrated, with the clergy behind the altar, when they genuflect they dissappear behind the altar, Fr Tim is two or three inches shorter than me, so I suspect when I genuflect it most probably looks as though my head, John the Baptist-like looks as though it is being served up on the altar.
Priest and people form "the Church, in much fullness" in the liturgical assembly, the altar is supposed to be the sign of Christ - of unity - but in fact so often it becomes the very thing that divides priest and people. Nothing can be so divisive than a huge block of stone. I always feel uncomfortable talking to people from behind a desk, unreconstructed hippy that I am.
at August 28, 2009

Perhaps Father we could take our cue from the first response we learned as altar boys many decades ago:

And if the priest is facing the right way then the congregation sees the embroidery, usually a crucifix, of course, on the rear of the chasuble, as it is intended to be seen. The priest is anonymous in his role.

Might as well restore the altar in its original position.


I am old enough (just) to remember serving Mass pre-Novus Ordo. At no time do I recall holding the hem of the celebrant's chasuble at the elevation (one would have to have had arms like an orang utan anyway). Yet it seems to be de rigueur in any photos I have seen on this blog and on other sites. Any thoughts?

At School in the 50's when I went through a phase of serving daily Mass it was a great privilege to be alone with the Priest,we had to make all the responses and held up the Chasuble.In those days early morning Mass only took about 20 minutes,sometimes we had an outside Priest from the local Monastery and that was only about 15.

Crux Fidelis
The holding-up of the chasuble by the Deacon (and M.C.) - or by the server(s) at a Low Mass, at the moments of elevation was to ease the fabric of the Chasuble (especially in older conical forms of that vestment). When the harder more baroque and, later, rococo chasubles came into fashion it was enough simply to raise the sides or lower hem. The symbolism of the Church being caught up, as it were, on the coat-tails of the celebrant is very fine. One could imagine a levitation of the whole dramatic scene. The custom, in a coarser age, or heaving up the back of the chasuble so as merely to reveal the celebrant's hinder parts is disgusting, in the the proper sense of the word, and is surely to be avoided.
Fr Christopher Back

Crux and Fr. Christopher - I do remember holding up the chasuble at the Consecration years ago. The two leading altar boys (there were eight of us in a full 'batch' in 1950s Ireland...) went and knelt on the top step to do so.

However, back then I was never very clear on the significance of it and thought it made more sense to raise it when he genuflected so it didn't get caught on his feet or drag on the ground.

But then in the EF the celebrant makes many genuflections without any assistance... The 'coat-tails' explanation does make sense, though...

Oh, Father. "Back in the day" you probably would have been the perfect candidate to own a Harley-DAvidson, you 'ole hippy you!!!

JH, thought I had corected that, twice!

I agree with Fr. Christopher regarding the chasuble. The 'coat tails' explanation has always been my understanding for the retention of this custom.

I have also seen the excessive raising of the chasuble (usually by over-enthusiatic servers) and agree that this could easily be given some very ribald and offensive interpretaions in this 'course age'. Perhaps the ideal is merely to hold the hem of the chasuble, and hardly raise it at all.

There may, however, be a good case for encouraging the restoration of the original practical form in certain Novus Ordo celebrations - there seems to be a fashion in some quarters for the revival of very full vestments by some priests, often at the very sort of Masses where the Eucharist is given under both forms and so extra chalices are used - here there is a real danger upsetting a chalice, which could be minimised by an adept server drawing the vestment back from the celebrant's arms during the elevation.