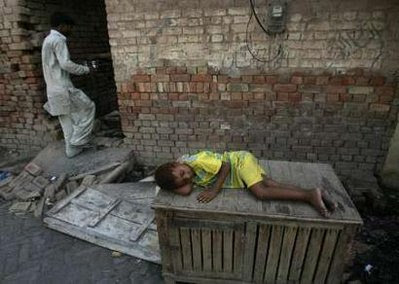 A boy sleeps in the narrow streets of a Christian community in Gojra town Punjab province August 3, 2009.
Pakistani missionary schools closed on Monday for three days to mourn the deaths of seven Christians burnt alive in clashes with majority Muslims, and Pope Benedict said he was "deeply grieved" by the killings. Four women and a child were among those killed in the violence that broke out in Gojra on Saturday, after Muslims torched Christians' homes following unsubstantiated allegations some of them had desecrated the Koran. 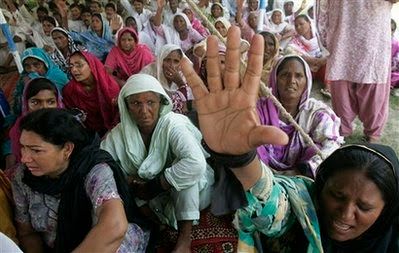 Pakistan’s parliament has unanimously condemned the attacks against Christians as an inquiry gets underway to quickly find the culprits. Pakistan’s President Asif Ali Zardari announces a compensation package for victims’ families. In spite of all of this Pakistani Christians continue to endure violence and discrimination as the death toll in Gojra rose to eight. For human rights activists and minority leaders blasphemy laws are the cause of the problem. 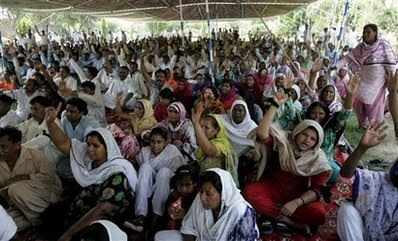 Bishop Joseph Coutts of Faisalabad, Pakistan, will be offering Sung Latin Mass in Westminster Cathedral at 10.30am. A talk 'The Cross and the Crescent' will be given by Bishop Coutts at 12 noon. This is an event organised by Aid to the Church in Need.http://www.acn.org.uk/shop/frameset.asp

Bishop Coutts' Mass will be on 17 Oct, according to the ACN site

I sent a email to Amnesty international -Australia highlighting the plight of Pakistani christians,but have received no response.Thier website contained no information at all
This to me indicates that ammesty-at least here in Oz- have abdicated any concerns for Christians,and I believe Christians should no longer support it. I do not know about the UK . i suggest that AID TO THE CHURHC IN NEED and the Barnabas Fund are far more worthier recipients.
(PS:If you come across any one with the surname of Durrant in Brighton or Eastbourne,they are probably relatives of mine)