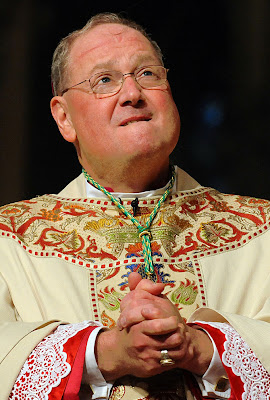 Archbishop Timothy Dolan of New York earlier this week identified four challenges facing the Church in the US:
the vocation to marriage,


“That’s where we have the real vocation crisis,” he remarked, noting that “only 50% of our Catholic young people are getting married.”
“We have a vocation crisis to life-long, life-giving, loving, faithful marriage. If we take care of that one, we’ll have all the priests and nuns we need for the church,” Dolan said.

the state of Catholic parishes and schools,

it must “maintain and strengthen the blessed infrastructure that we have in the Catholic Church in the United States.” This infrastructure, the parishes, schools, religious education programs, Catholic Charities and hospitals, has “fortified the Church” for “over 200 years.” Now, however, these same institutions are struggling because of their size and cost. The aim isn’t only to maintain them, he continued, they need to be strengthened because “now more than ever does the Church need a public face.”

the great number of lapsed Catholics

“It scares the life out of me when I find out that second most identifiable religious grouping on the religious landscape of the United States are people who say, ‘I used to be a Catholic.’”
We bishops have to do something about this, he insisted. “We have to say, ‘no, look, there is no such thing as a former Catholic. Your Catholicism is, as a matter of fact, in your DNA. And whether you like it or not you’re born into it just like you’re born into a natural family.’”
Now, he continued, “you might say, ‘I’m ticked off at my natural family, I’m not hanging around with them anymore, I’ve got things to work out.’ But you’re still a member of that family and sooner or later you usually make your peace with it and go home.”
In comparison, “the Church is our supernatural family,” he explained, “you might be upset with it, you might not be showing up for Sunday dinner, you might be mad at it about a couple of things…but you’re still a member.”
The Church “is your supernatural family, and, darn it, we need you and want you to come back home. You’re always welcome,” Dolan offered.

the difficulties in a culture desperate to keep the Church and morals out of the public square.

“a culture” with many “strident voices who want to keep” God, morals, virtue and the Church “out of the public square.”
He explained that those voices will say that “religious is fine as an individual hobby… but don’t enforce it on the rest of us.”
However, Dolan argued, without the voice of the Church, “our public square is reduced if the Church isn’t part of it, and what makes America great is that religion has always had a strong, respected place at the table.” Those who want to exclude the voice of the Church, he said, are involved in “galloping secularism.”
He explained: “There are those movers and shakers in society that want to take the teeth out of religion and we can’t let that happen” because America, individuals, the world and culture would be much worse off.
“We’ve got something to say, and darn it, we want to say it,” he stated.

What Abp Dolan identifies as challenges in the US are perhaps even more significant in the UK.
at August 14, 2009

The Archbishop's comments certainly apply - doubled in spades - to the UK. As far as I'm aware, only Bishop O'Donoghue has spoken out in similar terms (though not as comprehensively) with his 'not for purpose' report.

I wonder about the quality of Catholic Doctrine taught in our schools today. Recently I attended a school leaver's Mass for children going up to the secondary school. I noticed that during the Canon of the Mass, from Consecration to the Communion, the children sat in their benches rather than knelt. Then they all trooped up to receive the Sacrament.

If they are not taught about the real Presence in the Holy Mass, what hope have we?

'I wonder about the quality of Catholic Doctrine taught in our schools today', JohnF asks.

John, don't even go 'there'! As a Governor in a Catholic School where 60% of the staff are non-Catholics, the RE staff are Anglicans and 'lukewarm' Catholics and the struggle with the curriculum, sex-education, citizenship, inter-religious studies, made-up liturgies etc... is ALL uphill, I can tell you from my 25 years experience of having my kids in local Catholic Schools that Catholic education in the UK (UNLESS SOMETHING VERY DRASTIC HAPPENS NOW - IMMEDIATELY!!!) is all but dried up. If it is left as it is in terminal decline, one must ask why do we bother financing these institutions which are robbing our children of their Faith?

Hand them back to the government and lets HOME SCHOOL!

Among the lapsed there is a great deal of cynicism about the Church and I'm afraid a lot of that is down to some members of the clergy whether it be through child sex abuse or priests and bishops (eg Casey and Wright) living a double life. We should pray, not just for more priests, but for honest, upright priests.

Incidentally I was appalled to see a picture of a priest (Fr Jerome LLoyd of Hove in soutane and saturno) crossing a high wire above a circus big top to raise funds for a charity. A quick check of the Arundel & Brighton website would lead me to believe that he is not one of ours. Can you confirm this, Fr Ray?

Part of the answer is, I suspect, to be found in Chapter 3 of Patricia Morgan's Farewell to the Family?

Over the past 40 years the family living wage has become an endangered species in the USA as it has in this country, and male employment has been destabilised to the extent that economic insecurity has reached levels not seen since the Industrial Revolution.

A survey of unemployed youth in 1988 disclosed that most young men aspired to marry, provided that they could deliver a steady and decent income to maintain a family. Where this was not available these young men were hostile to the notion of marriage.

Patricia Morgan doesn't state the amount, but there is for a man a certain level of income such that women are significantly more likely to marry him if he earns more, than if he earns less.

Women who are compelled to work outside the home because of the inadequacy of their husbands' wages are significantly more likely both to work and to resent it, and their marriages are statistically of shorter duration than women who aren't so compelled. Pope Pius XI was prescient on this one.

At any level of income, unemployment significantly increases the probability of divorce; in the first of Thatcher's recessions the divorce rate for unemployed men was higher than for any other group other than the armed forces.

Another survey done in France disclosed that not being in work is a very strong predictor of not being married, and vice-versa. A man without work cannot practically become, or remain, a father.

"The obligation to earn one's bread
presumes the right to do so.
A society that denies this right
cannot be justified,
nor can it attain social peace." (Pope John Paul II, Encyclical Letter Centesimus Annus)

Is it any wonder that, if a nation refuses to provide its men with work and wages capable of enabling them to be father, these men might reason that such a society doesn't deserve children.

What an excellent chap the Archbishop sounds - his comments are both accurate (sadly) and thought-provoking.

It is good to hear of a member of the hierarchy who has the courage to speak out in support of the truth, even when this is uncomfortable, unpalatable or unfashionable with his listeners. We need more like him!

Crux,
I think this person terms himself an "Old Catholic" or something.

If he's so "Old" perhaps it's inadvisable to go tightrope walking.

The trouble is that if we make RE compulsory we are agreeing with the Taliban Fundamentalists,they are just as frustrated with the influence of WESTERN DECADENCE.

It is the responsibility of parents' to teach their offspring how to live and behave with each other.

I feel compelled to say that as long as we don't stand strong against the attacks on our faith, we are doomed to continue and increase the errors against it. I am horrified at some of the things (a very few) priests get away with. Please don't misunderstand me here. I love my priests and always have. I give them every benefit of the doubt before passing judgment. But there are times when judgment must be passed, and not by laity, of which I am a member. When a bishop learns that his priests are performing horrible wrongs against our Church, he must defend it and excuse that priest of his duties, if only through administrative leave, until an investigation can be concluded, much like they do for others who betray their positions of trust in a variety of fields.

As a society, America feels obligated to give an unbalanced defense to the perpetrator of crimes, often causing duress and confusion for the victims of it. Too many offenders appear to have more rights than the people affected by their thoughtless actions, and too many people lose their voice when standing up for truth and justice because of it. Forgive me for such a difficult response, but in my heart of hearts I believe it would be better to have a lot fewer really good priests in our world today. There are far too many who have extremely questionable character and lack holiness and humility, a true sign of their love for God.

Unfortunately, many Americans cannot trust their priests to be holy or help them with their spirituality. We are in a constant phase of discernment, as too often we stand opposed to our own clergy. It's a tough spot to be in, and it causes too much division. Yet this is the greatest attack, causing so many of us to leave the faith, in my opinion.