Towards a decent Altar

Today we moved the altar, I am afraid it is going to move backwards and forwards quite a lot, tomorrow we return the sanctuary to its original dimensions, and remove the font from the sanctuary, in the next month we will install the altar on its platform, raised on three steps 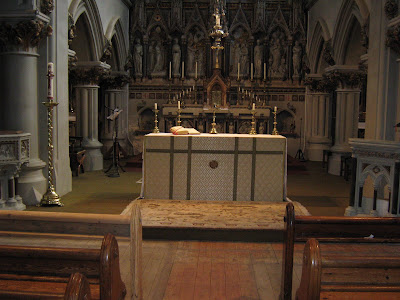 The altar after Mass this morning, Monday is supposed to be my day off, as it rarely is in fact, just so it is bit different I celebrate Mass ad apsidum. 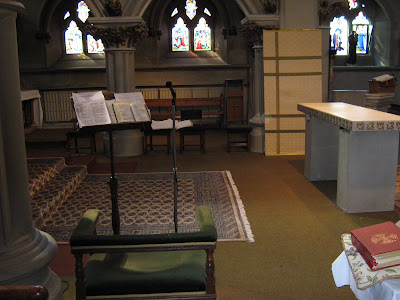 Here you can see the amount of space that is wasted on the sanctuary. 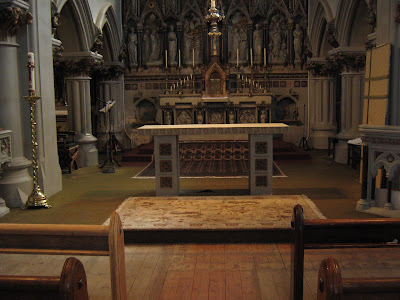 This is the altar stripped of its antipendium. 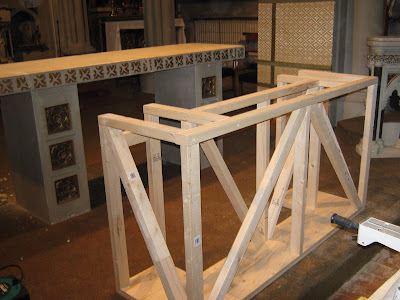 This is the support structure built by Peter this morning to support the mensa and distribute weight, it will be strengthened with a ply shell tomorrow. 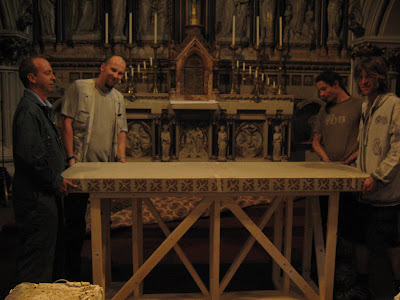 Four strong men with just a bit of groaning moved the mensa from its legs. 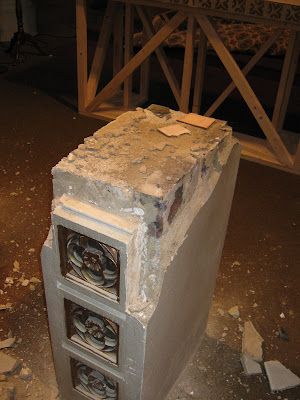 The most difficult bit was getting the decorative plaques from the legs, the will eventually be restored to the pulpit from whence the came. 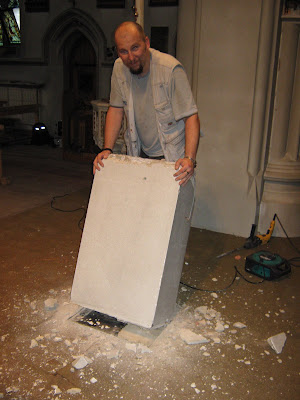 The legs weren't "glued down"! They just stood on the stone sanctuary step, the bit they added in front, as the predella, will be removed next. 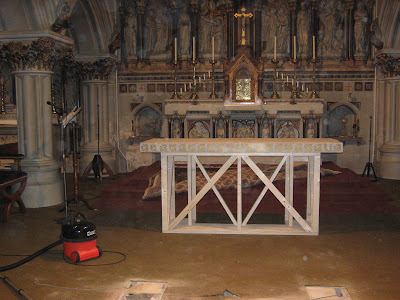 Clearing up, the holes in the carpet are where the altar was. 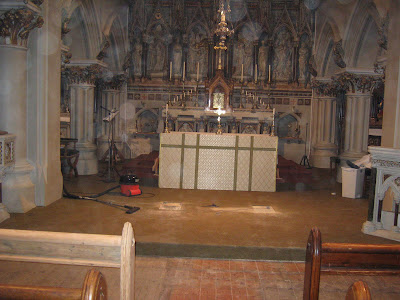 After a bit more clearing up this is what will greet people tomorrow, we are sanding the benches too. 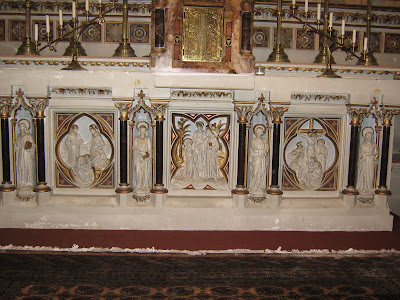 The altar will be placed in front of the remains of the cut down remains of the former high altar, the mensa for the now temporaray altar was cut down from this. It was dismantled lost its frieze and was push against the wall. As the carving will be obscured by the altar, as it has already been mucked about with, we want to use the three decorative narrative panels seperated by a pillar for our permanent altar.

This is what we hope to create.
It is a controversial solution in so far as it is using the original altar ensemble, rather than conserving it. We are trying to do what Gilbert Blount would have done if he had to put in a free standing altar.
The alternative would be to create something contrastingly modern which would obscure the original work, or something which was insubstantial and would allow a limited view of what remains of Blounts work or leaving in place the original stone carving and making a fibreglass facsimile. I have thought long and hard about all these options, all that will work and be worthy in our context is this solution.
The trouble is we can't afford it.
If you can help...
at August 10, 2009

Fr. Ray, have you considered putting a PayPal button on your blog...?

(I can't remember whether I've asked this already)

Our diocesan banking set up means we can't at the momemt.

Well...can you do one independently of the diocese? or is that verbotten?

Father, why not use the whole width of the former altar chest, including the subdividing niches? It seems a bit of a shame to tamper with the integrity of the original architect's design having survived this long, albeit in a truncated state? Are you concerned that, freestanding, such a configuration would be too wide?

Giles, It would be the best solution but
1) it would leave about a meter either side making it ungainly to circumnavigate, which is the reason for having a free standing altar.
2) The perspective wouldn't work.
3) The steps would have go into side chapels.