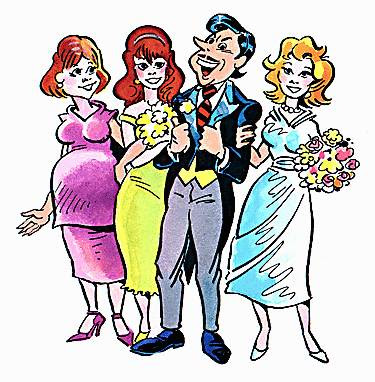 There was that case a few days ago of that woman who was charged with bigamy, having been married five times. I thought it was interesting that the state is comfortable with the idea of prosecuting a bigamist, yet the Church is much more ambiguous, at least in this country.
This case pricked my conscience. At one time for Catholics there was a great deal of stigma for those who separated, went through a civil divorced and then -attempted- remarriage. According to the Gospel remarriage equals adultery. The "pastoral approach" most priests take to the divorced and remarried, I must confess, I do it, is simply not to ask, and to assume the relationship is one of "brother and sister". In the Church we assume that people are innocent until proved guilty.
The problem is that even when there are signs of obvious "guilt", having got into the mind set of assuming innocence, we still assume innocence. Ultimately of course this "pastoral approach" is terribly destructive of the Lord's teaching on the permanence of marriage, it whittles away at it. The next step, again which many priests turn a blind eye to, is that so many divorced and remarried -adulterous- Catholics have no difficulty with is the reception of Holy Communion.
Today there are many divorced and remarried Catholics in public life, some occupying leading positions in the life of the Church, at least as journalists and commentators on Church life, is it too much to suggest that we could go at least as far as the State and suggest that these men and women are committing bigamy?
at August 02, 2009

In many cases, the answer is yes. Are people supposed to read/study Familiaris Consortio? Is it studied in Catholic schools?

Also, a different by related subject, is I Cor. 29-30 known to the Church?

Well, there is one Catholic out there who does not accept divorce and re-marriage. That person is myself.
My wife sought and obtained a civil divorce from me.
Later and for a particular reason it was suggested to me that I seek an annulment. My reply to that suggestion was that my marriage was a solemn binding sacrament. I would not seek an annulment because I knew that my marriage is binding "as long as we both shall live". That is the way that I live and have lived for over a decade.
JARay

If Priests continue to encourage the laity to pray the Rosary,I don't think they will have to worry about calling out certain possible sinful behaviours. The regular prayerfully invoked intercessions and resulting presence of Our Lady,in one's home(oh yes,she likes to visit,and brings guests!) has a very powerful challenging positive effect on the conscience.Through the Power of the Holy Spirit,She sneakily wakes it up,without you realising.She is silent but deadly,where sin is concerned.God is so Good.This has been my experience.

Yes Father, the divorced and ‘remarried’ without an annulment situation has been a problem for some time and is growing. In fact, if I remember correctly, the Holy Father asked some Vatican commission to look into it some time ago. I have not heard if anything has come of that.

I think most priests turn a ‘blind eye’ to the ”re-married” receiving Holy Communion. But what are they to do…? Aside from preaching on the indissolubility of Sacramental Marriage (which is rarely spoken of…) and the evil of divorce - what options do priests have?

Some catechesis in the confessional, perhaps…? Most likely otherwise good Catholics in such situations either don’t go to confession, or if they do, they don’t confess to be ‘living in sin’. And they don’t confess this because they don’t believe they’re living in sin. Human that we are, we’re very good at justifying our own actions. “My case is different” “We’re in a loving relationship, so how can that be wrong?” “I don’t need ‘a piece of paper’ to legitimize my marriage” Etc. etc.

The situation is analogous to the Contraception issue in terms of conscience - except that in the re-marriage cases the problem is exacerbated when children have resulted from the second ‘marriage’. I think all a pastor can do is to continue to uphold the ideal and the teaching of the Church. At the same time he must encourage people to still attend Mass, without receiving Holy Communion. while praying for the grace and strength to regularize their situation. And there are only two ways to do that and be in the state of grace: seek an annulment or live together celibately.

Not an easy choice and the latter may be the only option open to many people. But God doesn’t expect the impossible from us and, with prayer and His grace, what may seem impossible to us can become possible.

The need to be pastoral is used as the excuse for just about everything that some priests no longer have the bottle to talk about - abortion, artificial contraception, sin, civil divorce and re marriage, unworthy reception of Holy Communion etc, etc

Good on you, Shadowlands.

May God bless you profoundly.