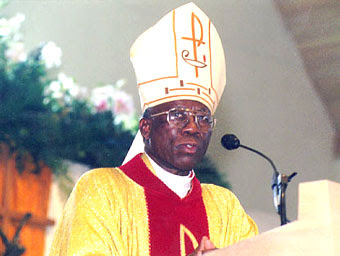 There has been a liturgical conference in Manila, on "inculturation" in the liturgy attended by Cardinal Arinze.
It is pretty obvious that some things must be adapted to particular cultures. It is perhaps highly fitting that in cultures where white or undyed cloth is associated with death that white, rather than black or purple should be used for funera vestments, hence that provision in the current General Instruction of the Roman Missal. Other rubrics have value in a counter cultural way, kneeling for example, is so contrary to western or northern culture, that its use signifies nothing other than an encounter the adsolutely holy.
I had a vague interest in Bede Griffiths when I was much younger and read the Bitter Pill avidly. In the ashram he founded, Griffiths would celebrate Mass dressed as a Hindu sadu, and fire, flowers and incense would be offered at Mass, as it would in a Hindu rite. Westerners loved it, Indians I met later thought it was a great danger to the integrity of the Catholic faith in the sub-continent, and blame him, in part for the blurring of Christianity and Hinduism. Hinduism, and to some extent Buddhism, always tends to absorb other religions. Some Asian priests, and bishops, I have met seem rich in providing social services but very shallow, frighteningly so, on theology, especially Christology.
Cardinal Arinze has been saying things like:

Adoration manifests itself in such gestures in genuflection, deep bow, kneeling, prostration and silence in the presence of the Lord. Asian cultures have a deep sense of the sacred and transcendent. Reverence in Asia to civil authorities sometimes shows itself in clasped hands, kneeling, bows, prostration and walking away while facing a dignitary. It should not be too difficult to bring and elevate this cultural value to honour our Eucharistic Jesus. The fashion in some parts of the world of not installing kneelers in churches should not be copied by the Church in Asia.

It is altogether unacceptable that the celebrant will opt for local dress in the place of universally approved Mass vestments or use baskets, or wine glasses to distribute the Holy Eucharist. This is inculturation wrongly understood . . .

Dance in particular needs to be critically examined because most dances draw attention to the performers and offer enjoyment. People come to Mass, not for recreation but, to adore God, to praise and thank him, to ask pardon for their sins, and to request other spiritual and temporal needs

What can I say? We should be listening to this man. Especially those in some of our more "liberal" parishes!

Why does dance need to be "critically examined?" It needs to be VERBOTTEN!!! GONE!!! NOT DONE AT MASS!!! EVER!!!

I'm with Gem! I've yet to see liturgical dance that is enjoyable, 'ordeal' would be a better word to describe it. Although the ones that I have been unfortunate enough to encounter (thankfully only a very few times) certainly drew attention to the, ahem, performers and had me squirming and crying tears of embarrased laughter.
Why dignify something so out of place at Mass with a critical examination?

I love Cardinal Arinze. I think the "critically examined" bit is because in some cultures especially in Africa dance has always been about worship. In Western cultures it hasn't and therefore has no place. In fact I vaguely remember the good Cardinal explaining something along those lines once.

Indeed Cardinal!
Inculturation has run rampant , especially in the inner city, where pastors take just about any part of the people's popular culture and try to put it into the mass. Trust me, I've masses celebrated in honor of Malcolm X.
I agree about dance as well. Especially in Africa, there is a tradition of sacred dance. They are specific movements that are only associated with God and with the sacred, and to the careful eye, don't resemble secular dancing at all. This doesn't translate into western culture, as they don't have this tradition. People in the west trying to dance at mass is nothing but culture rape.