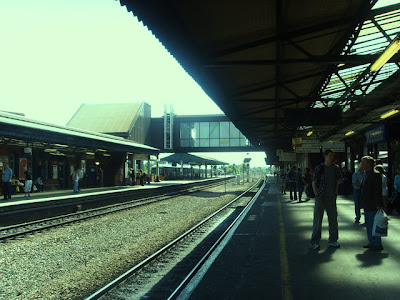 Brother Lewis reminds us that today is the 160th anniversary of the death of the Blessed Dominic Barberi. Apart from receiving Newman into the Church, he died on Reading Railway Station, I am sure there used to be a small plaque there commemorating him.
In Loss and Gain Newman says this of him:

On the Apennines, near Viterbo, there dwelt a shepherd-boy, in the first years of this century, whose mind had early been drawn heavenward; and, one day, as he prayed before an image of the Madonna, he felt a vivid intimation that he was destined to preach the Gospel under the northern sky.
There appeared no means by which a Roman peasant should be turned into a missionary; nor did the prospect open, when this youth found himself, first a lay brother, then a Father, in the Congregation of the Passion.
Yet, though no external means appeared, the inward impression did not fade; on the contrary it became more definite, and, in process of time, instead of the dim north, England was engraved on his heart.
And, strange to say, as years went on, without his seeking, for he was simply under obedience, our peasant found himself at length upon the very shore of the stormy northern sea, whence Caesar of old looked out for a new world to conquer; yet that he should cross the strait was still as little likely as before.
However, it was as likely as that he should ever have got so near it; and he used to eye the restless, godless waves, and wonder with himself whether the day would ever come when he should be carried over them.
And come it did, not however by any determination of his own, but by the same Providence which thirty years before had given him the anticipation of it...The thought of England came into his ordinary prayers; and in his last years, after a vision during Mass, as if he had been Augustine or Mellitus, he talked of his 'sons' in England.

Barberi's Letter to the Professors of the University of Oxford gives a very beautiful insight into his personality, it is a loving refutation of the claim that the 39 Articles are compatable with the Catholic faith.
at August 26, 2009

Forgive me, Father for a small correction: he did indeed suffer mightily from Pangbourne and then on Reading station, but died in a nearby hotel to where he was carried.
I have long had a devotion to him: something that stays with me was that he could not be admitted to studies for the clerical state without some knowledge of Latin. This was impossible in the state he was born, and he claimed after that our Lady had taught him; certainly he managed to acquire Latin without any obvious means of study. His biographer was reluctantly forced to conclude that the knowledge was simply infused through prayer.
I recall with joy celebrating Mass in the little church he built at Stone in Staffordshire, not long after I was ordained.

At least Father Barbieri wasn't stuffed and mounted on Reading station, unlike the Airedale dog "Laddie" I used to see in a glass case when travelling via Wimbledon during my student days.

When alive, the dog was used to collect money from passengers for railway charities as his master led him through the train.

Laddie also used to collect some leftover meat and bones from my father's kitchen car.

As Blessed Dominic met his rather sad end on or near Reading Station he would be an excellent patron for Railway lovers like myself.