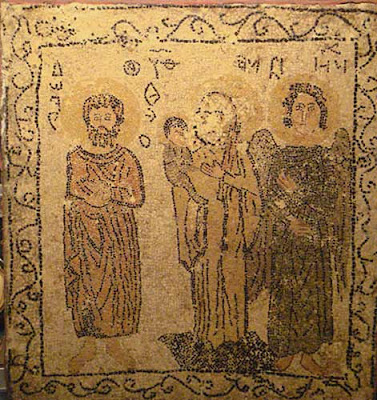 If I am in Piccadilly I always drop into Iconastas for a chat with the proprietor, and just to see what they have in their bargain basement, occasionally I find something I like, I buy them for my pension fund. Russian icons seem to be a pretty good investment, even if they are not, I have to admit I am an iconophile, I love 18th century Russian icons. I hate the garish colouring of later Greek one's. But Russian icons: I love their colours and forms, I love the fact they have witnessed the rise and fall of atheism, that most have been loved and possibly despised, that they seen war and tragedy, yet they have survived.

On the shops website they have this: a 5/6th Century Byzantine mosaic fragment of the Mother of God flanked by a Guardian Angel and male Saint. The price is, "on application", which most probably means you and I shouldn't even bother to ask, it is interesting to see such things can be bought in London even if by plutocrats but they do have bargains at a few hundred pounds.
Last year they had an Italian 14th century painted crucifix, about three foot tall, for a few thousand pounds, it was sold whilst I was in the shop to a delightful man who lives in Assisi. I had seen it before and was seriously tempted to buy it and give up holidays and anything else for a few years. It would have looked splendid behind the pulpit.
at August 23, 2009

I like you Father share a taste for the finer things in Church life that I cannot currently afford..... that is until my inherritence comes through and I can finally indulge in Icon, Relic and Rare book hunting

Apropos "look good behind the pulpit": the commissars, of Clifton Diocese, prohibited the return of a small black Crucifix which had been situated in just such a location after church refurbishment. Mind you they did allow the Blessed Sacrament to be restored to it's rightful position. It was always the case for a Crucifix to be in the said location - but how many pulpits are still used?