Black, Purple and White and Shrouds 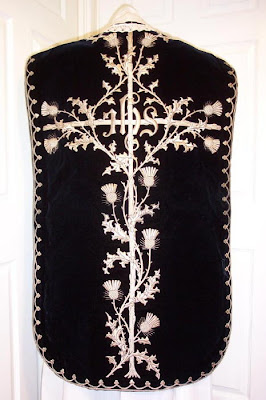 vestment for my funeral Mass
I have had a heavy few days, so something a little light. Fr Z, the Immortal, is running a poll on funeral vestments. There are three options according to the Roman Missal: black which has been worn from time immemorial; purple which seems to be an innovation, it is the colour of imperium, and introduces the idea of Lenten and Adventide waiting and yearning and finally white was introduced in the late sixties. I have always understood this as being an introduction for oriental cultures where white is the traditional mourning colour. 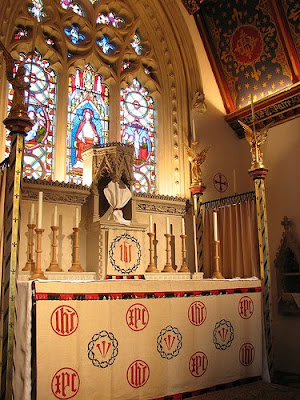 picture
Though white was used before the council on the continent for the funeral palls of virgins, especially consecrated ones, and those who died before the age of reason, it has a long history associated with mourning in England, where stencilled or stamped unbleached linen was used as veiling for images and altars during Lent. It was quite distinct from the triumphant white of Eastertide. 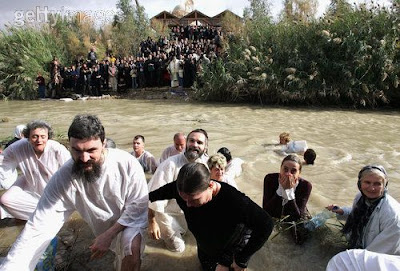 Lenten Array is a derivative of black, the ancient Lenten colour, not white.

OB,
It isn't a derivative of anything it is simply the raw fabric without alteration by an additional manufacturing process, the same idea most authorities suggest lies behind oriental mourning white.
Obviously there is conection between the colourlessness of mourning/penitential white, and black but not a derivative.

However I understand cloth of silver was considered to be black in some usages, presumably it was expected to tarnish quickly.

I just want to be buried in something comfortable, in case at the resurrection we end up with the same stuff we had on when we died. :-D

As for the priest's chasubles...how about basic white with black trimmings? Has that been tried? When a loved on dies it's hard enough as it is without being surrounded by black.

The origins of Lenten Array are detailed inter alia in Cuthbert Atchley's famous essay on the use of liturgical colours.

Both Lenten Array aka Lenten White and blue vestments are derivatives of black.

The ancient Lenten colour in Rome was black and there is some evidence of its 'lightening' on Sundays in some places - a practice of course that has a modern (and probably borrowed) Byzantine parallel where 'dark' vestments are used for weekdays in Lent and 'lighter' ones for Sundays, the change taking place at Vespers.

The use of Lenten Array is, IMHO, something to be much encouraged.

On the subject of death, have readers seen the photographs of the Greek monk whose whole face is lit up by a smile? According to reports of the other monks his smile developed, not at the time of death, but some time afterwards.

Of course, white was the liturgical colour for the funerals of baptised infants (ie those who died before attaining the age of reason) in the EF. Fortescue decribes this nicely, and also mentions a crown of flowers should be placed on the child's head as a sign of bodily integrity and virginity.

I've always liked the idea of being buried (preferably after being pronounced dead!) wearing my karate-gi (training uniform) which is white and my kuro-obi, my black belt.

Sounds like the perfect solution of colour to all this morbid talk of burials, death and decay! :-)

This is awesome, although I don't think I'll fit into my baptismal dress :)
So I'm off to the shroud store, I look great in white.
Quite seriously, though, I love the idea of being buried in a shroud. I never heard this before... thank you.