Shrouds and things from the depths 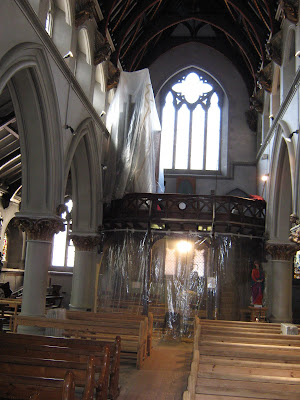 Today Alan, the organ builder shrouded the organ pipes in polythene, when he reconnects the organ he tells me polythene will expand like a balloon. Tomorrow he rebuilds the organ console in the gallery. Below the organ gallery Peter is sanding benches. 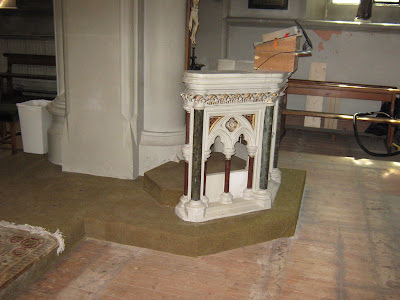 Yesterday Peter took up the additional flooring put down in the seventies when the altar was moved to the santuary step. 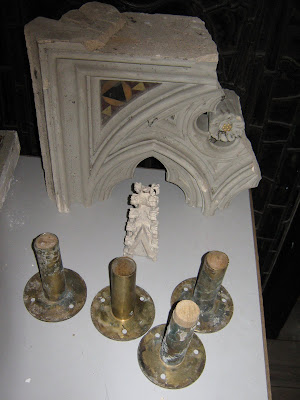 From the depths, underneath the santuary we found these bits and pieces, a broken piece of pulpit, which means at one time it was half an octagan, made up of four sides rather than three as it is now. The destruction must have happened before the horrible grey paint was put everywhere. I am not sure what the stone is, it is quite soft but this little fragment feels silky, just like skin. It makes me weepto think what damage has been done in the Church.

The other thing we found was a crocket which doesn't quite look as though it belongs to anything that exists now so there must have been something else that was destroyed.

We also found the bases to the communion rails, which we still happen to have. Now, what was it Cardinal Arinze said about communion rails and turkeys?

Many thanks to those of you who have sent donations, especially Clement from New York who sent a $200 from New York a few weeks ago, unfortunately your letter was delivered to our school which is on vacation.
at August 13, 2009

Are you going to refix the communion rails, father?

You only have to go into almost and Anglican or Catholic church to witness terrible, wanton damage that was committed in the name of liturgical progress during the past fifty years or so. The artistic integrity of well-qualified and conscientious achitects and craftsmen was seriously compromised by well meaning people who were obsessed with free standing altars for Mass facing, and as near as possible to, the people. If anyone dared suggest that this was wrong they were sidelined, ignored and described as "difficult".

I have said this many time before, in many places and contexts, but people are brought to God more by beauty - whether visual or aural - than by chatty, matey, informal services. It does, indeed, make you want to weep.

A pet hate of mine is where, mainly Anglican, churches cover up beautiful sanctuary and chancel floor-tiling, which was meant to be seen, with fitted carpet which, apart from anything else, ruins the acoustics.

I suppose the 'wreckovation' of the 60's and 70's, the extent of which you are now uncovering at St Mary Magdalen's, was seen as moving with the spirit of the times Fr Ray.

The 'liturgical trendies' of the day didn't reckon on Papa Benedict and his motu proprio Summorum Pontificum - not in their wildest dreams! In fact they must have thought that the 1962 Missal and Latin was buried for ever!

Well? What was it Cardinal Arinze said about communion rails and turkeys?

Damien - follow this link and all will be revealed!

I have just watched the video of Cardinal Arinze (thanks to George for providing the link in a previous post). I am very impressed by His Eminance's sound comments - essentially exhorting the people to maintain the continuity and tradition of the Church, show proper reverence to Our Lord in the Blessed Sacrament, but also respect the legitimate diversity of personal devotion, all in a very short period of speaking. Great stuff! This is exactly what the Holy Father encourages in Summorum Pontificum.

...and I assume the good Cardinal hasn't had to give out any turkeys yet!...

My thanks to George for the link to Cardinal Arinze's talk.

The communion rails could go back using Health and Safety as an excuse.

Whilst I disagree with Henry's comments elsewhere regarding the pews (which I personally find very comfortable - far more comfortable than some curved pews I have recently sat in) I do think he has a good point in saying that for Health and Safety reasons altar rails sould be brought back.

I recently attended five Masses celebrated by FSSP priests last week in a basilica which once had altar rails long since removed. On the first two occasions the congregation knelt on the floor and I was lucky that someone noticed that I had difficulty each time getting up from a kneeling position! I was pleased to accept help but can't help wondering what would happen if nobody noticed somebody having difficulty in this way.

Halfway through Mass on the third day two of the Scout altar servers suddenly moved to one side and shifted a couple of benches down to the front of the altar steps. No more worry about getting up! Strangely for the Masses on the following days this was also done half way through Mass rather than at the beginning but it did make us all autonomous once again and no more worries about getting up from a kneeling position.

As well as allowing the not so agile to rise up in a dignified way, altar rails do also help to distinguish the Sanctuary from the main body of the church. With so many churches now, especially in tourist areas, the public just wander into the open Sanctuary with their cameras flashing away as to them it is a continuation of the aisle and they see nothing to signify that that area has a very special meaning. Even the dreadful rope and stands found in Continental churches and cathedrals now replacing altar rails does not seem to deter some from entering the Sanctuary. Last week the rope and stands had been removed earlier than usual before Mass in the OF and as the Priests entered a couple of dozen people (all armed with cameras)had to be
removed from the Sanctuary where they had been wandering around in between the old altar and the modern altar. They were even taking each others photographs posing in front of one of the statues next to the altar! And they seemed oblivious to the fact that the organ had begun to play. I understand that in the 60s the idea was to 'open up the church' but cannot help feeling that this has resulted in today's lack of reverence by some.