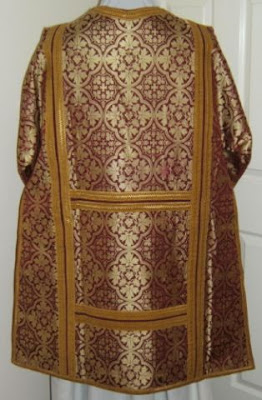 I feel a little embarrassed by posting this, especially when the parish could have done with the cash. But my father died late last year and in memory of him this set of vestments arrived on my doorstep last week. Someone, an adherant of the Traditional Mass and a one time friend of his, noticed we had to borrow a red set of vestments to celebrate my silver jubilee, a very kind gesture.
Without being too ungracious, re-pointing a section of wall might have been more his style. That being said this is truly an elegant set of vestments, simple and noble at the same time. It is presumably from the 1930's, though there is an element of the Puginesque about the fabric, maybe it is Pugin but it is enhanced by the simple braid decoration.
Apparently the vestments belonged to the Servites in Bognor Regis before they were sold.
If anyone wants to borrow a red High Mass set in the south east... 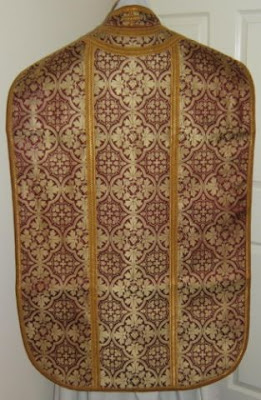 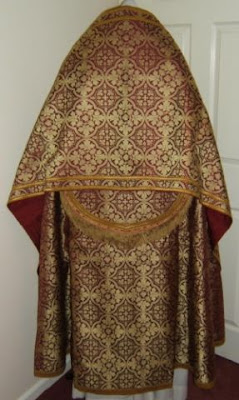 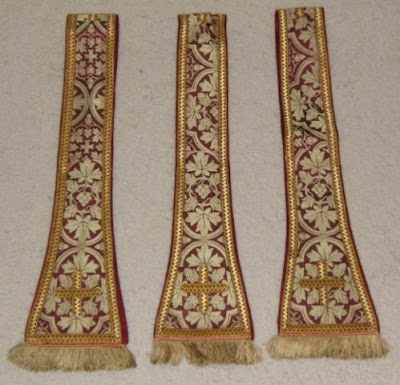 They look like beautiful vbestments. Why don't you hire them out and pay for your works that way?

Seriously, it makes one wonder what treasures are lying about and never used. I hope that they get good use.

Father, these are really beautiful vestments. Wearing them you will indeed show honour to God as you say Holy Mass.

:-D It's beautiful, and reflects the internal beauty of its intended wearer.

They are beautiful--and there should be nothing too beautiful or elaborate to wear to worship our Lord!