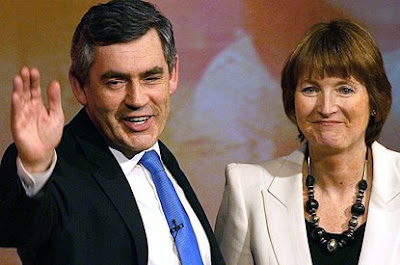 Harriet Harman the deputy leader of the Labour Party who is also the Equalities Minister, said yesterday, "I don't agree with all-male leaderships. I think it is a thoroughly bad thing to have a men-only leadership."
Everyone has villified her, but I support her, not because I am a rabid feminist but because I suspect that what she is groping for in a socially illiterate way is a model for leadership that is based on the complimentary roles of a man and woman, especially these dark times for the party. Obviously she is not saying anything as crass as women are better, the would be "unequal".
Isn't what she is really saying, "The Labour Party needs a mum and a dad"?
Now, I look forward to her applying the same criteria to the bringing up of children and to adoption.
at August 03, 2009

The last MAD WOMAN in charge did a splendid job,it'll take century to get over it.She was the main cause of what is happening now.

Is she actually saying "I want to be leader after Gordon's gone"?

The Labour Party needs to recover the idea of Mum and Dad. Mrs Thatcher has no responsibility for the moral anarchy regarding the family we have now, her governments were resolutely traditional. Her basic morality was the same as that of Clement Atlee, she differed on methods not on what she thought right and wrong. The great difference has come with New Labour. They have foresaken the traditional morality of Christendom and have partly persuaded the Conservatives to do the same.

Harperson and the Son of the Manse offer little hope.

Now, I look forward to her applying the same criteria to the bringing up of children and to adoption.