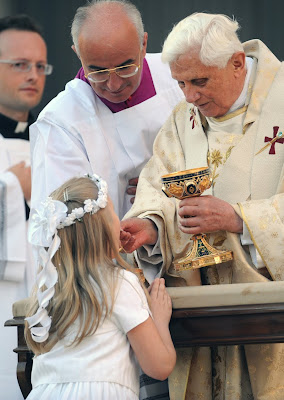 The always fascinating NLM translates a scoop by the always well informed Andrea Tornielli which goes a long way to explain some straws and rumours blowing from Rome earlier in the year, such a return to communion kneeling, refusal to renew the reception in the hand indult, the possibilty of imposition of sacramental formulas in Latin, ad orientem, well maybe it is true.
At least I think, the Pope will say all these things are normative and may not be impeded, even by a Bishop.

The newspaper [Il Giornale] today published a paper devoted to "propositions" voted on last March by the plenary meeting of the Congregation for Divine Worship, presented to Benedict XVI by Cardinal Antonio Canizares Llovera on April 4th. It contains a first outline of the "reform the reform" liturgy that Ratzinger would see implemented, underlining the importance of worship, putting a stop to creativity and abuse, giving more presence to the Latin language in the new rite, publishing bilingual missals (with the Latin text opposite), reconsidering the matter of the "versus orientem" [ad orientem] orientation at least during the consecration [i.e. during the Eucharist prayer], reiterating that the use of distributing Communion in the hand is an indult, an extraordinary fact, but that the [normative] custom of the law must remain to receive the host on the tongue. All this, however, will be prepared and presented in the Ratzingerian style: not any short-term document, no sudden imposition destined to go unheeded. Rather, a long and patient work from the grass roots ["from below"], that involves the episcopate. The point of departure and arrival is the conciliar Constitution on the Liturgy, Sacrosanctum Concilium.

I must admit ad orientem for me has a silver lining. Much easier to "Bail" on after Communion.

[Okay, so shoot me! Last week, the slower of the two priests at the EF parish started Mass 5 minutes late. There were a grand total of 5 of us in the pews. (there was an extra Mass on that night, which was why attendence was so low! Father also had two servers.] Mass is supposed to start at 7:15 I have a 10 minute drive to downtown. If I don't leave by 8:02 at the latest, I risk not being able to find free parking, relatively close to work (I had to negotiate to come in late to work those two days as it is) I promised I'd be in no later than 8:30. I can't afford to pay for parking, and if I get to the area after 8:10 I risk having to park blocks away and no way can I make it by 8:30.

So Fr. Slow had overrun 8 o'clock. (The pastor is "Father 32 minutes" - plenty of time to pick up breakfast + lunch on the way in)

Father slow lost 2 people (40%!) - one guy (who has to take the bus to work) he lost at the Ite Missa Est. And I bailed just after the last gospel. [Hey, he should have started on time!!] [I know, I know, but if I'm not on time to work I might miss MY "indult" entirely and not be able to go in the morning at all!]

Please pray for Father Edward Houghton, who was assistant priest at my parish, Our Lady of Grace and St Edward in Chiswick.

We've just found out that he died yesterday in an RTA; the parish is in shock at the news.

Father Edward Houghton was one of the kindest men I ever met. To say that our parish will miss him is an understatement.

Maria, Certainly, I think I might have met him once.
May the Lord have mercy on his soul.

Well Father, if the Holy Father encourages "ad orientem" altars, you can restore your church hight altar to it's former glory!