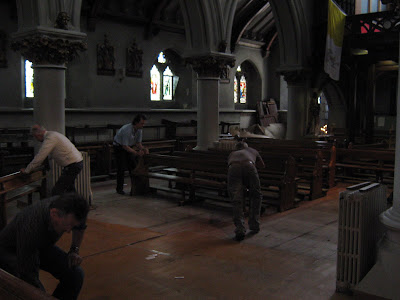 It took about two and half hours to get rid of the lino and pull up the nails. Thanks to Christine, Frances, Liz, Gloria, Peter, John, John, Jack, Laurence, Des, Peter and Robert, I hope I haven't forgotten anyone. They worked like Trojans.

The worst part of the floor was by the main door where it was heavily worn. I would love to put a hardwood floor on top of the pine boards but we simply can't afford it, I dread the dust that it is going to create. I have to speak to the organ builder to see what steps can be taken to protect the pipes and mechanism from dust and I suppose it is going to make the cobwebs in the vaulting of the roof visible for a few years. We'll carry on praying for the conversion of Bill Gates, and a large cheque in the post - God is good!

It is quite fascinating, archaeologically, you can see traces of an interior porch, the foundations of the font and pulpit and even holes for the original lighting system, gasoleers, which would have emerged from the floor. I wish we had more original pictures of these things. There are one or two metal plates around that would have had a purpose which is now forgotten.

Father,
I'm not sure if it's available across the pond but here in the United States laminate flooring is very common and at a reasonable price compared to hard wood. The flooring comes in planks which snaps together, they have it now which is textured like wood and looks very much like wood. This is very common here in homes I'm not sure if it would be appropriate for an ecclesiastical setting but thought about throwing it out.

Yes, we have that kind of flooring here but we couldn't afford it!
Most forms of this flooring would not be acceptable by the heritage groups we have to obey.

What will you be putting in?

(BTW, if memory serves, Bill Gates IS Catholic -- but I think of the Cafeteria kind as he donates to planned parenthood type things. So you're right, we'll have to pray for his conversion, and a check in the mail wouldn't hurt, either!)

Are the heritage groups helping out financially?

We get no help from "heritage" bodies, and there is no structure for support of our heritage from the Church, either nationally or in the diocese.

I know of someone who did some formidable fundraising for his Church by going to the library every Thursday and getting out a copy of Who's Who.

A letter a week to a celebrity or a peer of the realm produced some amazing results, especially from those you would not expect to be particularly sympathetic to Catholicism. Your parish has such a wonderful history, I'm sure there would be generous benefactors.

Sometimes people would send a material gift rather than money, but these proved very useful for raffles.

I hope this may inspire someone in your parish to do the same. It does work.

BTW, my friend had no luck with Mr Gates or his wife, though he wrote on several occasions.

How about some of the readers of this blog putting their hands in their pockets and sending some nice big donations to Fr Blake. I think you can be assured that any gifts will be well spent. Note the way that Father is using volunteers to do some parts of the job, thus making the money that is available go further.

not sure this is helpful but...

when I was doing my house I used to spray the air above to bring down / keep down the dust. Also, miele vacuum cleaner conected to sander leaves virtually no dust in the air. Much better than those silly dust bags that come with the sanders.

I think your best course of action is to visit your local DIY retailers, especially privately/family owned businesses and explain the problem of the floorboards. I think there are sealants available which should fill in the gaps between the boards. If you clean up the boards, seal the gaps and then apply some good quality floor polish it should solve your problem.