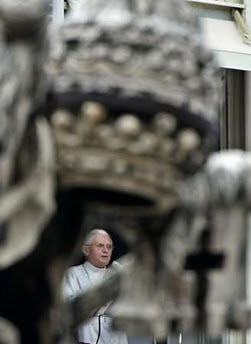 This is part of a very insightful article by John Allen.

Yet beneath this veneer of familiarity, there was something original about the way Benedict presented the Christian basics in 2007, so much so that I would nominate it as perhaps the year’s most important neglected papal story. To put the story in a sound-bite, I would call it the emergence of “Affirmative Orthodoxy” as an interpretive key to Benedict’s papacy.

By “affirmative orthodoxy,” I mean a tenacious defense of the core elements of classic Catholic doctrine, but presented in a relentlessly positive key. Benedict appears convinced that the gap between the faith and contemporary secular culture, which Paul VI called “the drama of our time,” has its roots in Europe dating from the Reformation, the Wars of Religion, and the Enlightenment, with a resulting tendency to see Christianity as a largely negative system of prohibitions and controls. In effect, Benedict's project is to reintroduce Christianity from the ground up, in terms of what it’s for rather than what it’s against.

This spirit of “affirmative orthodoxy” was clear in Benedict’s first encyclical letter, Deus Caritas Est, in which the pope laid out a philosophical and spiritual basis for the church’s teaching on human love. His encouragement for the International Theological Commission to set aside the hypothesis of limbo offers another example. Without softening the traditional teaching that Christ’s grace, normally mediated through baptism, remains essential for salvation, Benedict nevertheless put the accent on hope.

In his recent encyclical, Spe Salvi, Benedict once again takes a classic Christian doctrine usually seen as foreboding and gives it a positive spin. In this case the doctrine is the Last Judgment, often presented over centuries of Christian theology, preaching and art as an implied threat – obey God’s law or face eternal damnation. Instead, Benedict presents the Last Judgment as an expression of hope – specifically, hope that justice will ultimately triumph in a world in which evil and corruption too often seem to have the upper hand.

“Faith in the Last Judgment is first and foremost hope — the need for which was made abundantly clear in the upheavals of recent centuries,” Benedict wrotes.

“I am convinced that the question of justice constitutes the essential argument, or in any case the strongest argument, in favor of faith in eternal life,” the pope said. “Only in connection with the impossibility that the injustice of history should be the final word does the necessity for Christ's return and for new life become fully convincing.”

Benedict provided another illustration of affirmative orthodoxy in his annual address to the Roman Curia on Dec. 21. This time the subject was evangelization, or the missionary drive to make converts to Catholicism.

In keeping with the thrust of a recent doctrinal note from the Congregation for the Doctrine of the Faith, Benedict insisted that the church cannot renounce the missionary imperative. Yet he argued that the motive for doing so is not that people will otherwise be damned, but rather that only through evangelization can the Kingdom of God announced by Jesus, with its promise of reconciliation and true happiness, reach its maximum potential in history.

“St. Paul actually felt himself under a sort of ‘obligation’ to announce the Gospel, not so much out of concern for the salvation of individual non-baptized people who have not yet heard the Gospel, but rather because he was aware that history in its totality could not reach its fulfillment until all people were reached by the Gospel,” Benedict said.

“Through the encounter with Jesus and his saints, through the encounter with God, the balance of humanity is strengthened by those forces of good without which all our projects in the social order never become reality, but, facing the extraordinary pressure of other interests contrary to peace and justice, remain solely abstract theories,” Benedict said.

The traditional argument for missionary work has been the precariousness of individual salvation without baptism and the sacraments – in other words, a largely negative concern that souls may be lost. Benedict’s point of departure is different. The motive for mission, he suggests, is rather the positive conviction that the great human dreams of justice and peace must have Christ as their foundation, or else they will remain hollow promises.

To put the point differently, Benedict subtly shifted from an individualistic argument for evangelization to the collective welfare of humanity.

'Affirmative theology'... Is something really new? Positive thinking about things has been always the normal way in the Catholic Church. On the deep philosophical grounds it is based on recognising the principal importance of both kataphatic and apophatic theology. It is very different from the Eastern Orthodox church, which seem to mainly dismiss kataphatic theology. For example, it is a very common in the Russian Orthodox writings to criticise the Roman Catholic theology on these grounds (which is made as if Greek Fathers were mostly apophatic, which is not true).

On the more metaphisical grounds, our God is the first and the sole positive principle. Everything in faith and doctrine is basically positive. What could only be "negative" is defect and sin. The problem is that human beings are mostly concerned with (and interested in) negative rather than in positive. There is a fascinating argument in St. Thomas that free will (and true freedom in general) primarily involves the choice betwqeen unnumerable kinds of positive, not the choice between normal versus abnormal and defective.

Christian doctrine cannot in principle be based on negative. It is primarily not about sin and punishment (again, there is a clear tendency in the modern Orthodox Church to stress things involving the negative like sin, asceticism at the expense of positive), the last judgement and so on. It is about love of God and salvation. So Pope Benedict is just doing everything in normal way.

" Benedict appears convinced that the gap between the faith and contemporary secular culture, which Paul VI called “the drama of our time,” has its roots in Europe dating from the Reformation, the Wars of Religion, and the Enlightenment, with a resulting tendency to see Christianity as a largely negative system of prohibitions and controls. In effect, Benedict's project is to reintroduce Christianity from the ground up, in terms of what it’s for rather than what it’s against."

I think Allen's quote above is naive. Certainly the projection of Catholicism has been manipulated by her enemies as largely a negative system of prohibitions and controls. However, the Reformation, the Wars of Religion, and the Enlightenment have all one end. The setting up of man as God.

As regards motivation for spreading the Gospel. All I can say is that the best chance we have of salvation is within the Catholic Church. If you really loved your neighbour how could you be indifferent as to whether he is saved or not. If you knew there was a place where all the necessary means of salvation were available to him, would you not seek to bring your neighbour to this place? If you really loved Christ how could you not be worried about the effects of sin and separation from Him.

I think Allen misreads the Pope. He sees the Popes teachings as a means by which man can bring about true peace and justice in Human affairs by rooting himself in Christ. Unfortunately this is the same old mistake. Certainly, proper relations between people are a fruit of faith in Christ however they are merely as secondary effect. The primary orientation must be for the individual to turn to Christ for His sake alone. Those who loose their lives for my sake......

In short, I think Pope Benedict seeks to bring the world to Christ, not to bring Christ to the world as Allen appears to suggests. So I can't say I agree with this article. In fact I find it a little disturbing.