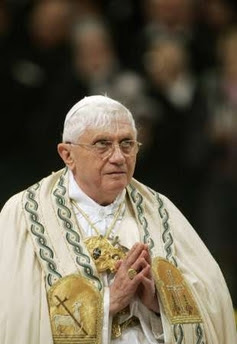 (CNA).- A joyful Pope Benedict spoke this morning with academics gathered at the Vatican to study the human person. While applauding their efforts, he also told them that science is not capable of fully understanding the mystery of human beings.

The inter-academic conference entitled "The changeable identity of the individual", is the collaborative effort of the "Academie des Sciences de Paris" and by the Pontifical Academy of Science.


The knowledge of human beings is then, the most important of all forms of knowledge".

"Human beings always stand beyond what can be scientifically seen or perceived", the Pope affirmed. This failure manifests itself today in “an incapacity to recognize the foundation upon which human dignity rests, from the embryo until natural death," said the Pope.

"Starting from the question of the new being, who is produced by a fusion of cells and who bears a new and specific genetic heritage", the Holy Father told his audience, "you have highlighted certain essential elements in the mystery of man". Man, said the Pope is "characterized by his otherness. He is a being created by God, a being in the image of God, a being who is loved and is made to love. As a human he is never closed within himself. He is always a bearer of otherness and, from his origins, is in interaction with other human beings".

Contrary to the Darwinian concept of man, Pope Benedict said that “man is not the result of mere chance, of converging circumstances, of determinism, of chemical inter-reactions.”

Man is a being who enjoys a freedom which ... transcends his nature and is a sign of the mystery of otherness that dwells within him. ... This freedom, which is characteristic of human beings, means they can guide their lives to a goal" and "highlights how man's existence has a meaning. In the exercise of his authentic freedom, the individual realizes his vocation, he is fulfilled and gives form to his deepest identity".

Closing his talk, the Pope told the academics, "Human beings have the specific ability of discerning what is good". "In our own time, when the progress of the sciences attracts and seduces for the possibilities it offers, it is more necessary than ever to educate the consciences of our contemporaries to ensure that science does not become the criterion of good, that man is still respected as the centre of creation, and that he does not become the object of ideological manipulation, arbitrary decisions, or abuses".
at January 28, 2008

What an atrocious cope!

The human mind cannot understand the human mind through science. Which is rather a serious limitation of science.

And science can not give answers to moral or ethical questions.

It is time that science was kept in its rightful place.