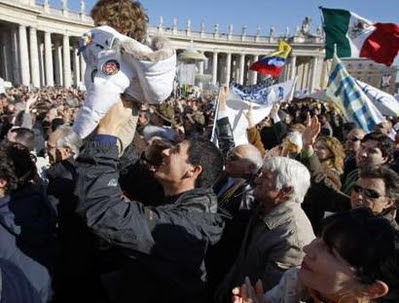 (AsiaNews) - Tens of thousands of young people and adults - more than 200,000, if the television linkups with other cities are counted - streamed into Saint Peter's Square from all over Italy to express their solidarity with Benedict XVI. It was a response to the invitation from Cardinal Camillo Ruini, vicar of Rome, after the violent controversy that had arisen at the La Sapienza university, leading the Holy See to decline the invitation for the pontiff to give the opening address for the university's academic year. Without any stridency, the pontiff exhorted all to work in a climate of "fraternity" and to "seek truth and freedom, in a shared commitment to a fraternal and tolerant society". When Benedict XVI appeared at the window of his study for the recitation of the Angelus, an ovation came from the square full of people and banners. "You did not come to us; we come to you!".
The pope greeted the crowds, but moved on immediately to his reflection, dedicated to the Week of Prayer for Christian Unity, which celebrates its 100th anniversary this year.
Benedict XVI recalled that "today the spiritual sons and daughters of Father Wattson, the Brothers and Sisters of the Atonement, are present in Saint Peter's Square". This is the religious community that began the tradition of the Week of Prayer for Christian Unity. 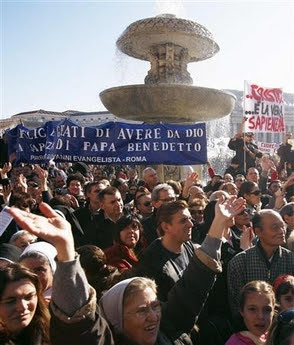 He then commented briefly on the theme chosen for the Week this year, "Pray without ceasing" (1 Thess. 5:17). "With this appeal, [Saint Paul] . . . wants to make it known that the new life in Christ and in the Holy Spirit brings the ability to rise above every form of egoism, to live together in peace and fraternal union, to bear each other's burdens and sufferings willingly. We must never grow weary of praying for Christian unity!".
The pope then invited everyone to participate in the solemn Vespers that he will lead on January 25 at the basilica of Saint Paul's Outside the Walls, "to invoke from God the precious gift of reconciliation among all the baptised". 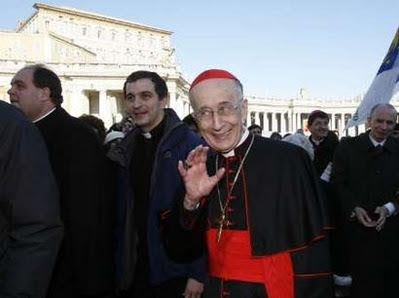 It was only after the prayer of the Angelus that the pontiff turned to address the crowd that had gathered in Saint Peter's Square "to express your solidarity" after the incident at La Sapienza. Amid the applause and the fluttering banners, Benedict XVI thanked everyone "from my heart", and thanked Cardinal Ruini, "who promoted this encounter".
Without argumentative tones, the pontiff recalled what had happened: "As you know," he said, "I had very willingly accepted the courteous invitation extended to me to speak last Thursday at the inauguration of the academic year at 'La Sapienza – Università di Roma'. I know this university very well; I respect it and I am fond of the students who attend it: every year, on various occasions, many of them come to meet me at the Vatican, together with their peers from the other universities. Unfortunately, as is well known, the atmosphere that was created made my presence at the ceremony inadvisable. I cancelled the visit unwillingly, but in any case I wanted to send the text that I had prepared for the occasion". 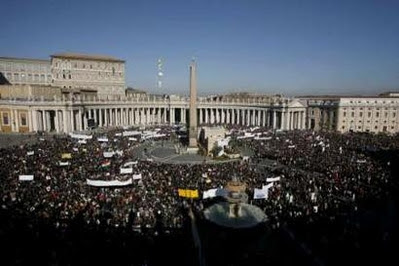 And as he had done in the written speech that he sent to the university, he explained what the university should be in this way: "I am bound to the university environment, which was my world for many years, by the love for the search for truth, for debate, for the frank and respectful dialogue of the positions in question"
The pontiff emphasised that this attitude is part of "the mission of the Church, which strives to follow faithfully Christ, the Teacher of life, truth, and love". 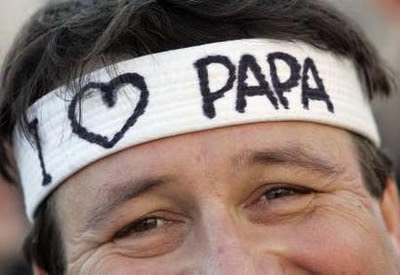 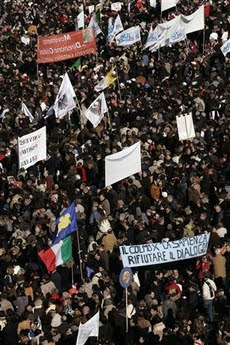 Finally, the pontiff called upon all the people present, among whom were a large number of university students, to live the university as a "search for truth" and as "respect for the opinions of others". "As a professor 'emeritus', so to speak, who have met so many students in my life, I encourage all, dear university students, to be always respectful of the opinions of others and to seek truth and goodness in a spirit of freedom and responsibility. To all and to each I renew my expression of gratitude, assuring you of my affection and prayers".
After the greetings in the various languages, the crowd burst into applause and chants of "Viva il papa" and "Freedom". The pope smiled and, waving goodbye, added: "Let us continue to live in this climate of fraternity, in the search for truth and freedom, in a shared commitment to a fraternal and tolerant society". In short, a lesson on authentic secularism from the head of the Catholic Church.

We love the Pope!

Dont you mean a lesson in authentic pluralism? Secularism is an intolerant creed which is not value free and denies to others the right to exist. In its name the European Commission denied Professor Buttiglione a job.

I thoroughly enjoyed the irony of the Pope giving a lesson on pluralism to the secularists !

Is that Cardinal Ruini or someone who lives in Brighton?

It is Cardinal Ruini, but he has that look of a fellow citizen, doesn't he?