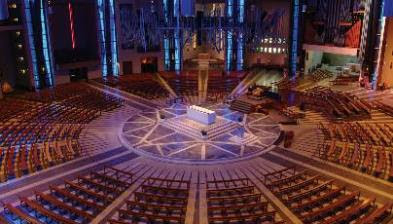 haven't been to Liverpool in thirty years, so it was good to visit it again. I am afraid I liked the Cathedral even less than I did previously.

Amazingly it was designed before the Council. It just seemed so terrible dated. I am sure I am going to upset many people by saying this but it reminded but it reminded me of Franco's basilica in the Valley of the Fallen, I suppose it was the light or maybe that it seemed to lack human proportion. I discussed it with a friend a "Wee Free", he thought it was a glorious space, for me it lacked an sense of intimacy or discovery, unlike its monumental Anglican counterpart, which struck me as being something dreamed up by one of those American early 20th century multi-millionaires: grandiose but lots of nooks and crannies where a man may weep before his God.
at January 04, 2008

I liked the bit about having lots of nooks and crannies where a man can weep before his God. I feel really strongly that Churches should be places where those who are not sure what they are doing there can creep in and lurk behind a pillar to see what happens. [I'm still inclined to do that myself!] I really hate it when a 'welcomer' springs out at you, flourishing a pile of books and papers and then frogmarches you to sit somewhere you don't want to.

Welcome back Father Ray,it's been barren without you.

Did you manage to find out where the Blessed Sacrament is hidden, I couldn't

I know them both well. Sorry, that should have been in the past tense. Your taste and mine seem to coincide. The last time I was in the Catholic one there were large puddles of water on the floor because of the roof leaking. I went to a performance of the Berlioz Requiem in the Anglican one. It was performed there in celebration of the 50th anniversary of the BBC. So that dates it. If you know the piece at all, there is a spectacular trumpet solo when the Dies Irae gets to Turba mirum sparcens sonum. The trumpeter was up on high on that gallery which you can see in your picture. The Sanctus has a tenor soloist and he too was up on high. It was a thrilling evening. I've never forgotten it.

Paddy's Funnel is a very flattering nickname for that building, if you ask me.

Looking at your picture of Liverpool Cathedral ('Paddy's Wigwam') I suddenly realised that with churches and cathedrals 'in the round' the congregation can assist at Mass either ad orientem or versus populum - at the same time! All they have to do is choose their seat according to their preference. Is this what happens?

Twentieth century churches can be OK:

This is apparently a 1950s building and looks newish, there was a medieval building there which looked a bit similar but it got so over-restored that it might as well have been a new one.

Which just goes to show that thirteenth century Gothic is still a perfectly valid style.

"I suppose it was the light or maybe that it seemed to lack human proportion."

This had me rolling. A friend of mine who sometimes drops by my blog (I've met him in real life too a few times, but initially the the musical theatre groups) is a doctoral candidate in theatre. HE's done many a stage manager gig, and I've also done my share of running lights/sound etc. We were comparing notes once about the worst productions we'd been involved with - shows we were glad we were in the booth and not on the stage. He was telling me once about doing some show where there was gratuitous groping, not terribly well acted, just a stinker all the way around. I said "Stephen, you should have given a cue to bring the grand master all the way down." [Thereby darkening the theatre entirely.)

The Cathedral has EGREGEOUSLY theatrical lighting - something Catholic churches aren't supposed to have, and it does offend the sensibilities in this context. This round "thing" is just calling for Jimmy Swaggart or some other huckster televangelist to "cry me a river."

HOWEVER, I *can* think of a good use for it and "everyone" can be happy. Have the place dimly lit. You can say Mass in Latin, and the people that want to look at your back can look at your back, and the people that want to watch what you're doing can. ;-D I bet way up in the rafters there'd be room for an overhead cam too. You'd only need the one in a fixed position. Then there's Plan B. Line the bulldozers up wheel to wheel and ROLL ON.

Given the cost of building these days, when was the last time someone built a REALLY good old fashioned church with all the nooks and crannies?

Over the summer and a few times the past year I did take some 360 shots of a few of the nooks and crannies churches I visited. Pretty nice ones too, more old fashioned than not. I should go downhill and mooch of a hotspot wifi high speed internet to up load a few.

There is some similarity I suppose!

Evelyn Waugh was still alive when Liverpool Cathedral was being constructed (whose design shows how it was the, by then, derailed and neo-Protestant final phase of the Liturgical Movement and not the decrees of the subsequent Council which wrecked Catholic liturgy). He had the following to say of it in an article in the Spectator magazine:"The new Catholic cathedral in Liverpool is circular in plan. The congregation are to be disposed in tiers, as though in a surgical operating theatre. If they raise their eyes they will be staring at one another. Backs are often distracting; faces will be more so. The intention is to bring everyone as near as possible to the altar. I wonder if the architect has studied the way in which people take their places at a normal parochial Mass. In all the churches with which I am familiar, it is the front pews which are filled last."

Couldn't agree more with anonymous on the need for nooks and cranies along with the absence of any greeters. Lots of 'jobs' in Church are for people who need jobs.

These people can be a health and safety ishoo. My Grandmother was once accosted by one of these people when I was with her. As she turned to express surprise to me at having hymn books etc thrust into her hands, she tripped on a chair. She was about 85 at the time and though was left unharmed, I was quite shaken by the incident.

Strangely though I find "Paddy's wigwam" a place with far more nooks and crannies for private prayer than the cavernous and to my mind sterile Anglican cathedral at the other end of Hope Street. Then again, I was confirmed at the "wigwam" so it does have a special place in my heart.

The tabernacle is set into the wall on the main axis of the building, directly facing the main doors of the cathedral, but given its design, it is easily missed. People can, and do, sit behind the high altar for Mass; and the cross and candles have always been aligned in a row on the edge of the altar in the traditional manner.

The tabernacle will be further diminished when the Blessed Sacrament Chapel is re-ordered. The liturgical commissars feel that the original freestanding marble altar is too big and too high off the chapel floor, so they have covered it up with a screen for the time being, and Mass is offered on a smaller temporary altar placed in front of the predella. There is a discussion of the proposed (unnecessary) re-order at
www.totalcatholic.com.

Despite the much vaunted intimacy of a circular arrangement, many priests can vouch just how detached they feel from the congregation during the celebration of Mass at the cathedral, principally because of the enormous size of the sanctuary; and contrary to Waugh, the seating, as built, is not tiered.

Incidentally, while Westminster cathedral hosted John Tavener’s ‘99 Names of Allah’ last year, that pales into insignificance when you discover what Liverpool cathedral have planned for next month, a Requiem, by the same composer. In Tavener's words:
'I envisage the final movement as a huge affirmation of the ONENESS of God, as all four groups will [represent the four great faiths of Christianity, Hinduism, Judaism and Islam] pulsate round a vast building singing I AM in Hebrew, Sanskrit, Arabic and Greek'.

I just hope the cross is not removed from the altar for this event.

Apparently, because of its shape, the modern Catholic Cathedral at Liverpool is known by local wags as "Paddy's Wigwam" or the "Mersey Funnel" (Mersey Tunnel", geddit ?) The Mersey Tunnel is a roadway under the river estuary, opened circa 1932 by King George V and Queen Mary.

"Paddy's Wigwam" was designed by Frederick Gibberd in 1959, and therefore owes nothing to the so-called reforms of Vatican II as its website misleadingly claims.

Building began under Archbishop John Heenan before he was translated to Westminster.