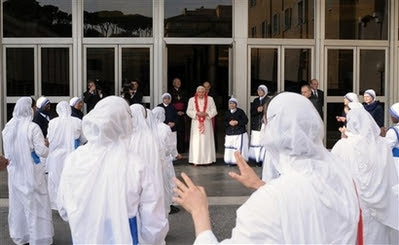 CNS carries an acount of the Holy Fathers visit to a shelter for the homeless run by the Missionaries of Charity. The story then continues to discuss the various charitable works of the Holy See through Cor Unum. I was touched by the final section:

The oldest existing form of papal charity is the Almoner's Office, established in 1409. It responds to individual requests for assistance with expenses like medical or utility bills and rent.

Spanish Archbishop Felix del Blanco Prieto, who was named papal almoner last year, said Pope Benedict told him to "never let our charity be lacking" and to come to him personally if he needed additional funds.

"Every day we receive pressing requests from people in trouble: from the sick, from those who can't pay the rent or the gas or light bill, from immigrants, from students and from people looking for work," Archbishop del Blanco told the Vatican newspaper, L'Osservatore Romano, in a recent interview.

The archbishop said his office allocates funds after the petitioner's situation is checked with his local pastor. The amount is generally between 100 and 500 euros (about $150-$750), and each year more than $2 million is distributed.

Most of those asking for financial help are individuals, he said.

"We're here to give out a small, concrete assistance, not to finance great projects," he said.

The Almoner's Office is tucked into a courtyard on the north end of Vatican City. The Missionaries of Charity shelter stands behind the Vatican walls on the southern border. For those on the receiving end, these are essential institutions, but most of the thousands of visitors who stream to the Vatican each day don't even know they exist. 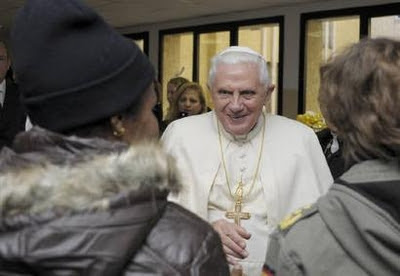 In this parish we try to do other very practical things like feeding the hungry and homeless on the sea front, every year we touch between 5,000 to 6,000 lives, we have the immense privelege of hosting the Voices in Exile project which cares for destitute refugees.
Every year in our parish we offer "free money" for people in similar situations to what the Papal Almoner's Office, we have few takers. The one's we have had have generally been genuine, some have been out and out scoundrels on the make. I have always been unhappy about dividing the poor into the "deserving" and "undeserving poor" but sometimes you just have to be prudent.
Love has to be practical. Christ identifies himself with naked, the hungry, the imprisoned, the sick. I think every diocese, every parish, every Catholic institution, every Catholic should be giving money away. It is so easy to substitute the ubiquitous "committee" for personal practical acts of love. Neither committees nor the State can substitute for Christ's demand on us as individuals to be generous.
at January 06, 2008

Whilst we all know of the truly extraordinary work of the famous Missionaries of Charity, it is good to read that the papal almoner's office still performs its work.

I could wish more Catholic parishes were like St. Mary Magdalen's, Brighton, in following in Christ's footsteps in feeding the hungry and clothing the naked.

This form of charity seems to me a continuance in the modern world of the medieval work of charity performed by the monasteries before the Dissolution.

There are, of course, many examples of the continuity of the Church's tradition, but I can't think of a nobler one.

You will inevitably encounter scroungers and hangers-on, but that makes the plight of the needy no less real.

Some, perhaps most, people despise the helpless, the hopeless and the inadequate, but Christ did not.

God bless you, St. Mary Magdalen's, Brighton for helping those who without you, would be without help.