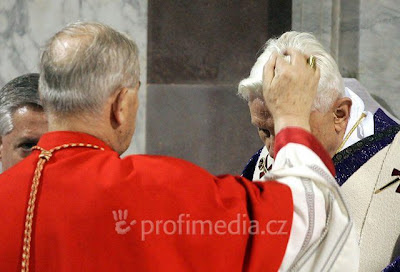 Pope Benedict XVI urged the faithful not to idolize material goods and to give alms to the poor in his annual Lenten message issued today.
Benedict reminded Roman Catholics that Lent - which starts Wednesday, February 6 and is the period of penance ahead of Easter - also requires them to pray and fast.
But the pontiff this time placed the emphasis on alms-giving which he described as a "specific way to assist those in need" and "an exercise in self-denial to free us from attachment to worldly goods."
"We are not owners but rather administrators of what we posses," Benedict citing the Gospel, said in his message which was issued in the form of an eight-page booklet.
Christians are called to share their material richeswith the poor since to "come to their aid is a duty of justice even prior to being an act of charity," the pontiff said.
However, in "today's world of images" flaunting one's generosity to "make ourselves the centre of attention" was a temptation that must be avoided since it ran against the Gospel teachings, Benedict said.
"Do not let your left hand knowwhat your righthand is doing so that your alms may be done in secret," Benedict said quoting Jesus' words as recorded in the Gospel of Matthew.
The pontiff also said alms-giving was not necessarily about sharing material goods, but also showing others love and charity as exemplified by Jesus who died on the cross to save mankind.
I have just notice Fr Z has what appears to be the complete text of the message, it should upset those who think God is a Capitalist!
at January 29, 2008