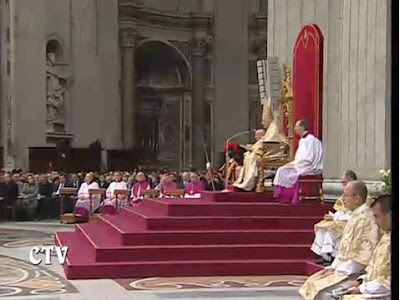 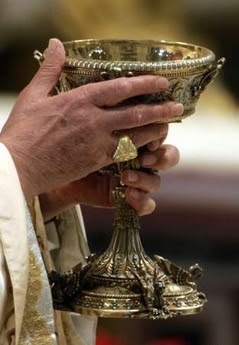 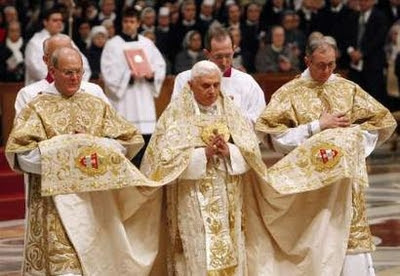 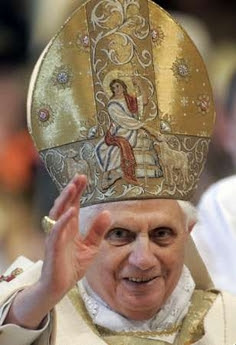 I am as you might expect a great fan of the sartorial revival that is going on in Rome. I have always been a proponent of the seamlessness of the Church: the Church today is a direct continuation of the Apostolic Church. Wearing vestments that belong to his immediate predecessors ratifying their reign and his succession.
I was always a great admirer of the Great John-Paul, and like many asked how the shy Bavarian professor would ever fill his shoes, what all this revival is about is seems to be simply saying it is the Office of the Papacy that matters. Wearing the coat of arms of John XXIII or the mitre of Benedict XV means that Benedict XVI is only important in so far as he is their successor. Fr Justin has makes some interesting comments on this on his blog about the Pope dressing in harmony with the basilica, he also mentions the extravagance of the previous Master of Ceremonies.
The whole point of vestments is to cover up the personality of the priest or bishop, not to emphasise it. He is important because of what he is not who he is.
I do like the return of the Throne, the idea of the Chair of Peter is so important for Catholics.
I also like the way the cope is held open, with the suggestion of "alter Christus" being crucified, being led.
at January 01, 2008

If only they would sight the (happily restored) papal throne in the apse of St. Peter's.

It would then be directly beneath Bernini's magnificent Triumph of the cathedra Petri, with its relic, and supported by the four giant statues of Doctors of the Church.

Now that really would be a symbol of continuity.

And they've got plenty of time to move the throne before The Feast of St. Peter's Chair.

Sorry, it's me again.

It may seem a bit niggardly of me, but can you imagine putting that chalice to your mouth to drink from?
The edge is broad and full of sculpting. I don't like fat, heavy beer glasses and much prefer a delicate, fine edge to put to my lips.
And, can you imagine purifying that chalice after Communion? I, as an Instituted Acolyte have the priviledge accorded to me to purify the Sacred vessels after Communion. I read that many EMHCs do undertake this task, but over there in England, you do not have any Instituted Acolytes.

Could I say thanks to EJ for recommending this website.

I've signed up to lovetobecatholic.com and can now log in and watch the videos, which are great !

I was in St Peter's for First Vespers, Te Deum and Benediction as well as for the Mass on New Years Day. The whole liturgical atmosphere, the Holy Father's words and the music were wonderful.

It's a pity, however, that many people there didn't seem to have a much of a clue that they were in the presence of Christ Himself and kept standing on their seats to get a better - not only when the pope walked in, but also during Benediction and Mass. Very few knelt for Benediction - it wasn't for lack of space.

It occured to me that for wholly practical reasons, the sedia gestatoria had its uses. Re-introducing it (highly unlikely I know) would at least mean that people didn't feel obliged to stand on the seats every time the pope went up the aisle. Carried on the sedia, he would be visible to all.

All in all, though, it was a great privelege to be present at those ceremonies. After Benediction, the pope went to the crib in St Peter's Square, and he looked really happy, waving to the crowd. The Swiss Guards band played 'Stille nacht' for him - it was clear from his facial expressions that the music moved him and, presumably, reminded him of Christmases in his homeland. He seemed amused (or bemused?), however, when the Police band later struck up with 'Dreaming of a White Christmas'!