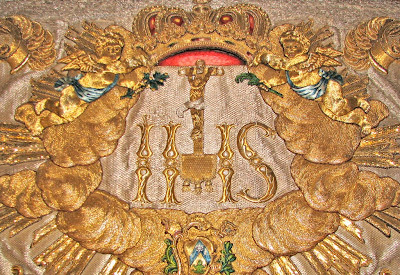 I like Roman Christendom and I like this short article about the pronunciation of the Holy name, it is in response to a certain Protestant misunderstandings, I suppose we who want the vernacular ought to start using Joshua, while we are at we could get rid of "Amen", "Alleluia", "Hosanna":

Here is what these poor, unfortunate, half-educated Protestants say about the Holy Name:

"Although this name is not at all difficult for English speakers to pronounce, the King James translators of the Bible chose to take his name from the Greek New Testament, in which book he was called Iesous. This name, for reasons which are not entirely clear, became Jesus in England."

The reasons are entirely clear. The language of the Christian Church became Latin after the Roman Empire became Christian.

Any simpleton knows this, surely?

And the Latin for Yeshua or Iesous is Jesus.

The English equivalent is Joshua. So if they want an English translation they should call our Lord by the name of Joshua Christ.

They call Him Jesus Christ just as we do in the Roman Catholic Church.

Yet another example of the simple truth that Christianity is Roman and Catholic, that the Roman Catholic Church gave to the whole world the first message of Christianity and that is why the Latin version of our Lord's name is the name that is universally used.

The name, as I said in my last post, means

It comes from some American protestant group of Jewish converts. Like Jews for Jesus. Who say they are not Christians.

The Hebrew name for Jesus is Yehoshua which means He will save. As he did.

It's not Sant'Iago, the correct form is San Tiago or in portuguese São Tiago.

In portuguese the Name of Jesus Christ is "Jesus Cristo".

Spanish has (at least) four different forms, which all derive from Latin Jacobus and are thus translated as "James" into English (although English has "Jacob" as well, doesn't it? German only has "Jakob").

The forms are Santiago, Diego, Jaime and Jacobo. The most popular form, which is used for the apostles, is Santiago, which is - obviously - a contraction of Sant Iago or Yago, from Latin Sanctus Jacobus (the form Yago is still around, but fairly rare). So John was right. The San Tiago, which anonymous mentioned, is actually a later misunderstanding when "Santiago" was split up again, but at the wrong point. In Spanish this led to (San) Diego.

I'm sorry, but in portuguese we say São Tiago.