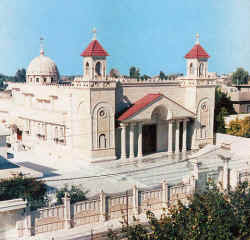 (CWNews.com) - Iraqi Muslim leaders in the city of Kirkuk have condemned the car-bombing of Christian churches, saying that an attack on Christians is an offense against Islam, the AsiaNews service reports.
During Friday prayer services in Kirkuk, imams condemned the January 9 attacks that had struck the city's Chaldean Catholic cathedral and a Syrian Orthodox Church. The blasts-- which came as a shock to Christians, who had not previously been the targets of violence in the northern city-- were "contrary to Islam," the Muslim leaders said.
Acknowledging the friendship that has marked Christian-Muslim relations in the city, the mosque officials said that "attacks of this nature are alien to region." Several Muslim leaders made personal visits to Archbishop Louis Sako of Kirkuk to express their concern and their solidarity.
at January 12, 2008