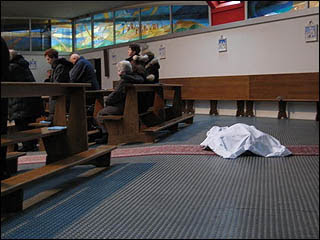 I heard this on the radio just before I finally got to bed at three this morning, it has been on various news reports:

Pio Lieta, 86, suffered a fatal heart attack during an early-morning service at the Church of the White Madonna last Sunday.
An ambulance was called, and Mr Lieta, whose name means "pious" in Italian, was pronounced dead at the scene.
However, instead of halting the Mass, Father Mario Peron asked for the body to be covered with a white cloth and left Mr Lieta in the nave of the church while he finished the service.
It is against Italian law to move a body without the authorisation of a local magistrate.
"What could I have done?" said Fr Peron afterwards. "The Holy Mass has to be celebrated. It is not right to make an exception for one individual. Only people who do not understand the point of Mass would not understand the logic of my decision. We could not stop. We were united together in church and we prayed for him."
Only a handful of parishioners were present for the early-morning service, and some expressed their surprise at the priest’s decision to L’Adige, the local newspaper. "We should have stopped as a sign of respect," said one unnamed worshipper.
Mr Lieta’s funeral took place at the same church today, and his family said they were not upset by what had happened.
Father Angelo Lieta, his son and a missionary in Chile, said: "My father would have agreed with the continuation of the Mass. I am only sorry I could not have been there myself."

It reminds me of a something one of my predecessors said about a woman who had died at Mass, "one moment she was looking at her Lord under sacramental form, the next she was looking at Him face to face".
The Law of the Church is that once the sacrifice of the Mass has begun it must be completed, so alot depends on at what point of the Mass this man died; before or after the consecration, the reports don't say.
at January 25, 2008

Well, I do hope that he went over and gave him last rites ... and then continued.

Some years back I was assisting at Mass and someone pretty close to the front was having difficulty. Fortunately for him 2 of our parishioners (whom I knew to be medical doctors) went over to assist -- it was right around the preface if memory serves. Then after Mass I was talking to another long time Mass goer whom I knew by sight, who had also leaned over the man to assist (he was practically next to him when the guy had keeled over) when he was initially laid out I found had given him a quick absolution. It turned out he'd been a laicized priest! The person came to and was later taken to a hospital for a checkover ... but it had me internally going for a while. The sainted Fr. S. hardly turned a hair. (He did know that two assisting were doctors... so maybe that's why he didn't blanch.)

Thank you, Father, for that clarification. It was always my understanding that once Mass had been begun, it could not be abandoned, depending on the point the celebration has reached, except for some really tumultuous event such as a nuclear bomb.

Even then, it is, I understand, desirable for the consecrated species to be consumed, if at all possible.

To drop dead in Church seems to me an appropriate end.

Some years ago, I witnessed this happen.

A man felt ill as Mass ended. People helped him sit down. Before the priest could reach him from the sacristy, he had slipped quietly away.

The paramedics who arrived instanter could not revive him.

The priest administered the short form of extreme unction, and then invited those of the congregation who had time to wait behind to pray for the soul of the deceased.

No one moved.
It was a sobering moment, a real memento mori.

God rest the soul of this man.

I can't think of a better way to die! WOW! I would love that to happen to me. And if it does I would expect the priest to continue to say Mass- offering it up for me I hope as I came to purgatory.
The man is blessed-may he rest in God's peace.

I would have interrupted Mass to Absolve, Annoint and give him the Apostolic Indulgence and even Communion, if he were evidently dying. and not likely to last until the proper time.

I imagine that the priest hasving ensured all that needed to be done for the man was done wanted to complete Mass before Italian officialdom took over the death scene.

It is the lot of doctors who attend Mass for it to regularly interrupted for us, by having to attend to elderly members of the congregation who collapse. It's a privilege to be able to help, though it does create problems for my boys who re left in the pew (my wife is not a believer and does not attend).

I've yet to experience a death at Mass but I suspect it is merely a matter of time.

To be fair, in my parish there are usually at least four doctors at the particular Mass I usually attend. It's often a fight for us to see who is most appropriate to attend (the geriatrician, the GP or the two palliative physicians!)

Can't think of a better place to go..& would be happy to lie in a Church..

In the rubrics for the classical Roman Rite a priest is not permitted to leave the altar once he has started Mass. If he died another priest would have to finish it. Today the priority remains the same and the celebration of Mass should continue.

Anon.,
It is obviously not desirable to leave the altar but the administration of the sacraments to the dying is of greater importance.

I was once at a Mass where an elderly man dies just before it started.

It was an open air Mass at Bayham Abbey (this being post 1535 etc)on the Kent/East Sussex border for the big Anniversary of St Augustine's arrival in England in 1995.

I was in the orchestra with my then school and pointed out a helicopter to a boy in my form, which then landed, it being the Kent Air Ambulance. Shortly afterwards a priest came to the lectern to announce the death and we said some prayers then Mass started.

The elderly man received the Last Rites from the Bishop and every Priest in the deanary was there, so we thought it was a pretty good way to go. No mention of halting the proceedings.

Presumably things stopped long enough to recognise that the man was dead... one doesn't ask for a white cloth to cover someone who is in the process of dying... so one assumes that the priest, recognising that there was nothing one could do for the dead other than remember them in the Mass, proceeded to do just that, and attend to the needs of the living...

No one seems to have made the point that the Mass contains prayers for the dead, not least in the 2nd and third eucharistic prayer, and it the priest surely could have taken things in the direction of a requiem?