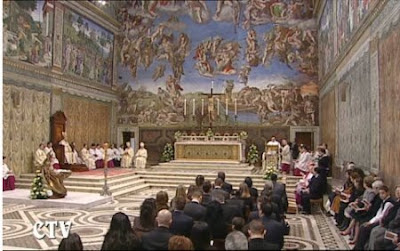 So the Pope celebrated Mass “ad Deum”. In Rome it is not unusual for a priest or bishop to do so. Many churches have removed the hideous forward facing altars they installed in the 60s and 70s, I suspect more under pressure from some civil cultural officialdom than Church authorities. Though in the great basilicas the side altars have never undergone the vult face of the main altar in the sanctuary. Private 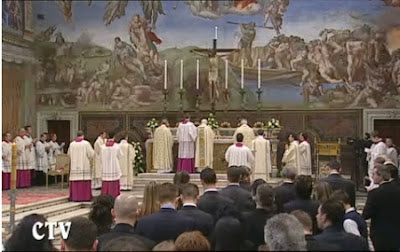 Masses in St Peter’s are always celebrated “ad Deum” or facing “liturgical east”.
The Pope’s private chapel has never had a forward facing altar. Paul VI installed an oval altar, John Paul II replaced it but it still faced “east”.
The Missal says that “the altar should be freestanding, so that Mass maybe said facing the people, which is always desirable”. The desirability is the “freestandingness” of the altar, not the facing the people, according to the Congregation for Divine Worship.
The Pope’s orientation at Mass this morning will be the most significant liturgical act in the last 40 years, for most Catholics it will have more impact than any other liturgical act, just the same as the re-orientation of altars after Vatican II was the most significant act of liturgical reform in the last 2000 years. I don’t think that is an overstatement. For most people it is not what they hear that is important but what they see.
Most priests are aware that celebrating Mass either side of the altar is a legitimate choice, but most priests realise that choosing the ancient direction is considered eccentric at the least.
Apart from the liturgical problems of having two altars, the altar is supposed to signify Christ, two Christs seems a little odd; the direction in which priest faces says a great deal about the relationship of priest and people.
What has always concerned me is that priest in the new theology of the Mass is separated from the people by a huge immovable block of stone. He stands against them, he inevitably becomes the focus of the liturgy, his personality matters for good or ill. A common orientation of priest and people says that although we have different roles in the liturgy ultimately priest and people are God’s servants. Ad Orientem the priest identifies with the people who themselves stand behind one another in the Divine Presence.
When the priest faces the people, he becomes important. In the liturgy he stands in the place of Christ, not just in leading the community but in his person, this being another Christ becomes of even more significance in the Mass and most especially Eucharistic Prayer. The priest in Mass celebrated facing the people bears a burden that is often beyond him, his gestures, his words, his very face becomes the gesture, words, the very face of Christ.
To expect this becomes a burden beyond him! 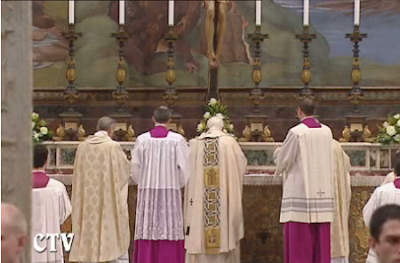 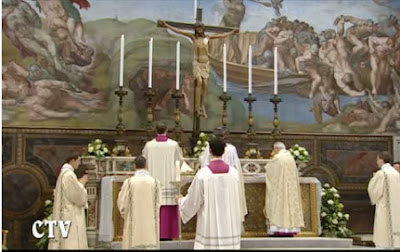 Nice altar. Pity about the chasuble.

How can you have a free standing altar? Can't work. First comes the altar, then the gradine with the candlesticks on and the tabernacle another step up. Then there is the reredos with the cross and the big six, and a throne for exposition. The whole composition is in accordance with the theology.

The only way free standing would work is if it is designed for a paper-thin celebrant.

An exceptional post about a wonderful celebration. Perhaps such a post could be reproduced for the use of priests to teach the faithfull about the correct position of the celebrant at Mass. (Well, we can but dream.) Thanks again for the post and pictures.

The Holy Father has often used a mixture of both old and new in his liturgical celebrations, especially over Christmas, indicating the link he has with apostolic tradition and indeed that he is only pope by virtue of those who have gone before him. Successor of the successors of peter if you like!!

"The priest in Mass celebrated facing the people bears a burden that is often beyond him, his gestures, his words, his very face becomes the gesture, words, the very face of Christ.
To expect this becomes a burden beyond him!"

Well, of course, I expect every priest has his own level of comfort zone. In your case I don't know if it stems from natural self effacement or being overly concerned that "people are looking at me." i.e. dislike of speaking in public, period!

I do know what you mean regards some priests misguidedly feeling the need to "perform" and I think perhaps that was why the TLM was and is so exacting about every little thing...to guard against just such a thing. But to my mind, there's no reason why the NO shouldn't also be exacting as to "doing the Mass without putting your own personality into it overmuch." [A priest's personality is inevitably going to come out in his homilies, as a rule of thumb. And that happened preVatican II as well. Which is okay, in my book.]

I don't think of the NO as "looking at the priest" so much as I think of it as "thank God, I am now able to see the same thing as the priest sees because I can't see THROUGH him." Which is what I thought when I was a youngster and the TLM was said. It was a revelation to me to see what was going on ON the altar. To me, if a priest says Mass, doesn't ADD to the what's "scripted" in the prayers, and says it calmly, in the same way every time, and looks at the elements on the altar, rather than trying to make eye contact with the people, then the priest is saying the Mass well.

It's not unlike Icon painters who do not put their own personality into the work. If the priest has a similar approach to the Mass he should be okay no matter which way he's turned.

As regards the burden of your own face standing in for the face of Christ .... people are still going to be "looking at you" when you're NOT saying Mass too.

For instance, last year when you were in your cassock going through the streets helping the beaten up fellow, believe me ... people of the right disposition ALSO saw "Christ" helping that man.

Yeah, it's a burden in that you're human too and no human being can be expected to do the right thing 100% of the time. We all have our faults and moments of snappishness. But anyone who expects the priest to be "perfect" all the time, is not a grownup as regards understanding the faith or human nature. But it's nice when "we" see you doing the things Christ would do....and it reminds us that we, the laity too, should "put on Christ." You just happen to be the Captain leading the troops.

My mother once remarked that when she was growing up in her town in Pennsylvania, if you saw the priest in the street you would kiss his hand. [She was Eastern Rite.] This would have been in the 30s and 40s. It was part of his being "In persona Christi."

If it's any consolation to you, I guess Peter felt the same way in Acts when he told the fellow to "get up I'm a man too."

It is still not wrong to kiss the consecrated hands of a priest.
In fact, all of the faithful do this at the altar rail immediately following ordination.

I look forward to the day when a priest who is "idoneus" will be permitted to celebrate facing the people, if requested by a group which exists stably.

Oh, Ma, I wasn't by any means saying it was wrong to do so then or now. It's just that it would be fairly uncommon now, at least in the west. It's just that Fr. Ray seemed unduly burdened[?] if that's the right word for having to be the very face of Christ. Well, I think all priests are in a special way, given they are ordained and stand in His place. But in a different way we are all called, ordained or not, to be "the face of Christ" to those around us. Now how successful we are at it is something else, human beings, being, well, human beings. But we're nevertheless called to "put on Christ." I simply think of Fr. Ray and his confreres as the "82nd Airborne."