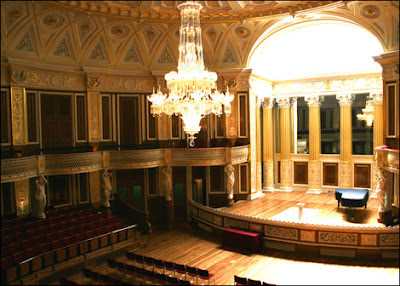 I really did enjoy the performance of Emilia di Liverpool, one of the most incredible of opera plots. Although the central character is the family "di Liverpool", that was about its connection to Liverpool. Lots betrayal and neurosis, all centred around the tomb of a girl's mum. She had eloped; the girl that is. Mum died 0f a broken heart. Dad was lost at sea. He returns, so does the lover, lots of cursing, the prospect of duel, lots of examination of human failty, everything is sorted out, girl goes mad and dies. The end!

The European Opera Centre's singers were really quite brilliant, better than I heard last time I was at La Fenice in Venice, they are all young and incredibly talented. If you can get there tonight or tomorrow, the last performances before it moves to Gdansk, seats are I think about £35, very cheap for really outstanding talent. I was so very impressed by the diminutive young Korean soprano who sang Emilia, Francesca Parks.

What I did find, I would like to say, amusing, but I think it was rather sad, Liverpool City Council took a couple of hundred seats for a free ballot, they had 900 applicants they handed out 100 of the tickets and then told the other 800 applicants the tickets had sold out, rather than suggesting they could buy tickets. Added to that there were seemed to be no advertising material about this event anywhere in the city, even at the venue itself there were no posters or banners, you could so easily have missed it. Consequently they have been playing to less than full houses, last nights house was about two thirds full, apparently the worse they have had. So I was absolutely delighted after the performance when a couple, Theresa and Martin, came up to me and introduced themselves, telling me they were avid readers of the blog. I am afraid if my parish council had been responsible for the advertising I would be making a few changes.
at January 04, 2008

I used to be a regular visitor to St. George's. Again, it was many years ago (1960-63). I never saw any Opera performed there in those days. I used to go to the Organ recitals given by George Thalban-Ball. He was the resident organist. I'll bet that there isn't one now!

John, the opera took place in Concert Room, in the main hall where there was a temporary ice skating ring, the organ is still there, both rooms have been restored, maybe the organ too.

What a beautiful performance space! There's something I've been rooting around on youtube or elsewhere for that'd I'd love to find. It's quick few minutes of a comic film short that manages to cover all the major opera plots, cartoon-fashion. Our local PBS (public tv) station used to some years back have that in for a little filler here and there. I think some Canadian woman had put it togther. I'll post it if I run across it.

It's criminal "the powers that were apparently out to lunch" were stupid and didn't tell people there were seats to be had.

35 pounds is relatively cheap for opera. Was that primo seats or nosebleed?

Glad you enjoyed the opera, Father.I don't know whether you watched Newsnight tonight but you would have been amused at Jeremy Paxman's comment regarding the rubbish piling up in the streets of Naples and the council having to bring in bulldozers. Showing this Paxman said that it should have the makings of a new Italian opera and finished the programme with music from an Opera which i was not able to identify as background to the rubbish clearance!