Priests going on and on and on... 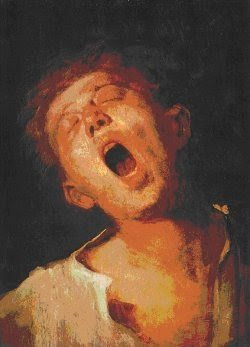 Amy Welborne tells of going to Mass, in a piece about clericalism, where there lots of lay people were involved, but:

... the impression I took away with me - after an hour and a half - was the person of the priest. His voice echoed in my ears, his presence dominated my memory of that time. He introduced the Mass, he explained things, there was an RCIA rite, so he explained that, he preached a 25 minute homily, and at the end of Mass, after the lector ran through 6 announcements, he stood and added two rather lengthy announcements of his own.
I’m not kidding when I say that my reaction, at one point was, If you want to turn around, face the crucifix and whisper for a while, THAT WOULD BE FINE WITH ME. PLEASE. FEEL FREE.

I can't help thinking that more people lapse from the Church through being bored stiff, than for any other reason. I remember being on pilgrimage in the Holy Land and concelebrating Mass with for or five other priests, I fell asleep during the lengthy homily, when I woke up I found that the only person on the sancturay actually awake was the celebrant who was preaching. They lay people were all awake!
There must be some way of controlling clerical verbosity, it is so tempting to explain everything, to put in a little joke, to give directions about posture, "kneel or sit as you like", it drives me mad when I concelebrate. I know I preach for too long, I normally stop if people look too disinterested, but the liturgy should be about raising of minds and hearts to God, not to the priest.
He must always decrease and Christ increase.
at January 16, 2008

At Leeds Cathedral things got out of hand and the sermons were lasting 20 minutes which is far too long for a sung Mass.

2 million pounds has been spent on yet another reordering and the liturgy is still awful.

Interesting to note your criticisms - as a mere person in the pew I find it irritating when the priest in my parish always announces 'Eucharistic prayer number so-and-so' before saying it. The number is up on the board for all to see but as it is in English I do not understand why we have to be told which one it is. Why can't he just pray it? or am I being too fussy?

Father, here's your signs to look for: If the kids are starting to kick the kneelers, you've gone on too long.

If the men have gone outside to grab a smoke, check behind you to see if the servers have gone in the sacristy to swipe some incense or play "rock, paper, scissors."

If the ladies are starting to involuntarily twist their rosary beads in a hangman's knot, it's time to wrap it up.

If the lady in question is a relative, better stop right away. Even mid sentence.

An Anglican curate is said when asked to preach to have asked his bishop "What shall I preach about, my lord? He got the reply "About God and about 10 minutes".

I think that the use of Latin would tend to restrict clerical verbosity.

i am not sure if this is always boredom that makes servers or co-celebrants fall asleep, Father. i have been several times to the Masses celebrated in very traditional chapel and there was an established pattern the servers were notoriously sleeping through the homily, no matter if the homily was interesting or boring. When I found myself more interested in observing them falling into their usual nap and wondering if they are going to do this again, I left that chapel never to return there again. I think I did right thing!

As a sleeping server, I must point out that we can hardly hear the homily except as a background droning, as there are no loudspeakers near the sanctuary. When preachers rely on the public address system, they do not speak loudly enough to be heard unless there is a loudspeaker within earshot.

I know a parish where the priest gives a running commentary. Could it be the one mentioned here?

Pelerin. BINGO. Right on the money. I especially hate this on Palm Sunday. "Hey, if those bozos don't know by NOW to do the parts that says "all" in the passion reading, they don't want to, or can't read, or are dumber than a box of rocks."

There is a priest from the OP who visits my parish occasionally.
Every homily of his will last at least 30 minutes, high Mass, low Mass, and anything in between. In fact, he is the homilist every year at the All Souls' Day Mozart Requiem Mass, which this year lasted at least three hours.

This priest will, in every homily, show just how many languages he's fluent in by either reciting some old letter in Italian, or saying some obscure prayer in Hebrew, or singing (yes, singing) in Polish.


Once, I was in the basement of the church while a funeral was going on upstairs. This visiting priest was the celebrant, a close friend of the decedent's family.

After about 1.5 hours of Mass, I saw one of our priests come downstairs, bolting through the basement.

"Father!" I said. "Is the funeral finally over? We have class tonight!"

I found out later that during this funeral he actually turned at one point, faced Our Lady of Chestahova, and started singing to her. In Polish, of course.

Don't havr a problem in our Parish...wouldn't be having any lay person giving any notices anyway!

My father knew that each Sunday the sermon would be of the same length - and being an Anglican church they were longer! He had plenty of time before returning.

However, one Sunday the inevitable happened. the Vicar finished earlier than usual and announced the hymn. Silence! he announced it louder. Still no organ. One of the choir was duly dispatched to the vestry to find my father had dozed off! Hurried return to the organ loft and amusement all round in his choir!

I think, Father, that as well as the problem of lazy priests who can't be bothered to prepare their homilies properly, there is also a serious problem of lazy people who can't be bothered to listen properly, or who are in such a hurry to get Mass over that they begrudge every minute of the homily. It's always a good thing to have a clock in a part of the church which the preacher can see but which the people can't.

However, I must admit that I live with the fear that one of these days I will fall asleep during one of my own homilies and will wake up in an empty church after the people have tiptoed out and gone home!

Some well-known figure, I forget who, when asked how much notice he needed of a speaking engagement, said "If I'm to speak for ten minutes, I need a week's notice. If for half an hour, then a day's notice will do. But if you want me to speak for two hours, I can start right now."

Far too many clergy think that speaking extempore is compatible with concision, relevance and coherence.

Our priests only speak about themselves; it is terrible. And one speaks of his addictions, nightmares, healings, thoughts of suicide. It is awful. My children (and I) can hardly bear it.

Another priest likes to joke and sing.
The Gospel is not being preached. How I wish there would be an extraordinary form of the Mass somewhere where I could attend so at least I could relish good liturgy.

A priest of my acquaintance. now retired, was really a very good sermonist, indeed often inspiring and memorable, except for one thing - he would utterly lose the congregation afer about twenty-five minutes: "As usual, Monsignor S--- preached an excellent sermon, as usual, twice."

Good job none of you live in Africa. A regular Sunday homily is at least 2 hours. And they get very cross if it's shorter. I don`t think we are hungry enough for proper preaching in this country. When we are, the preachers will rise to their office. Keep at it Fr Ray and don`t give in if people look bored. They`re probably hung-over and need to hear some home truths.

I am a missionary in Uganda and I' have had the misfortune of attending three hour masses. The priest takes over an hour to give a homily. I don't think people necessarily want long homilies in Africa. I think the priests here are so full of themselves that it causes problems. It seems to me that many Ugandan men become priests as a way out of poverty, not because they see it as a service. They just want cars to drive around in.

If the celebrant insists on lacking energy and enthusiasm, then 10 minutes is more than enough. If something invigorating, enthusiastic, or - dare we say - challenging is to be said, then 20 minutes will fly by and actually be remembered past lunch.
Thanks for a great posting.