No to Popery, Yes to Cowboy hats 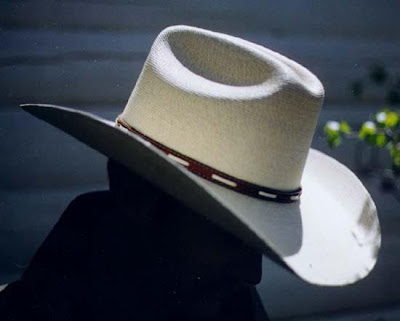 It seems that some people are concerned about our new habit of wearing cowboy hats during academic ceremonies at Southwestern Baptist Theological Seminary. The complaint is that wearing a cowboy hat is somehow undignified and inappropriate.
Please realize that the mortarboard that most modern academics wear as a hat actually derives from the medieval Roman Catholic priesthood. You see, in the Middle Ages, every university student was also a cleric, in the lower orders of the Roman priesthood. The biretta/mortarboard identified one as part of the lower Roman clergy, and the birettas became more colorful as one rose higher in ecclesiastical rank (for instance, purple for bishops, scarlet for cardinals).

Bum logic from Baptists all around. [And that's "bum" in the American sense!]

I did say before though that seeing the pope in the red Saturno does give me the giggles though. It's involuntary.

What has this got to do with anything?

Well, anon, the argument is extremely flawed on this issue from this particular Baptist institution's part. They pick and choose which arguments they want to use against anything that is even near "smells and bells" - but for that which they do themselves, like wedding rings, also a "pagan" custom ... they don't give a second thought too.

Read the follow up comments at the original story. [BTW, most universities, Baptist or any religious or secular traditionally have their graduates decked out in graduation gown and mortar board in the US. Sometimes students "do their own thing" but it's not the usual.

If they wanted to wear academic hats, why not wear Tudor bonnets? No allegations of popery there (indeed they are known in Glasgow as 'bonnets in the John Knox style)