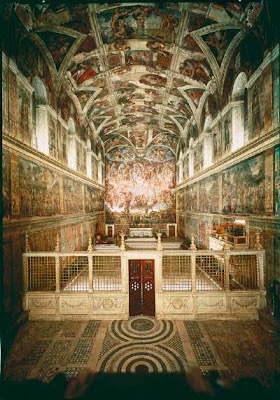 Rorate Caeli:
Tomorrow, Pope Benedict XVI will celebrate Mass (according to the Missal of Paul VI) facing the Altar of the Sistine Chapel, versus Deum*, according to the Office of Liturgical Celebrations of the Supreme Pontiff, headed by Monsignor Guido Marini (Apcom reports):

"This year, the wooden platform on which an altar was placed for the occasion will not be set up, but the actual altar of the Sistine Chapel will be used.

"A decision was made to celebrate on the ancient altar to avoid altering he beauty and harmony of this architectural jewel - the Vatican note explains - preserving its structure, in a celebratory viewpoint, and making use of a possibility foreseen by liturgical legislation. This means that, at some moments, the Pope will be with his back turned to the faithful and facing the Cross, thus guiding the demeanor and the disposition of the entire assembly"
at January 12, 2008

Although the Pope will be celebrating facing liturgical east, i.e. standing before the high altar, "facing God", so to speak, this means that in the Sistine Chapel he will in fact be facing geographical west, won't he ?

I always thought "ad orientem" was a rather confusing phrase, given the fact that church buildings face in all sorts of directions, depending on the plot of land where they are built, surrounding buildings, roads, etc.

The phrase "liturgical east" is so much easier to understand.

I think the title of the book by Fr. Uwe Lang says it all :

"Turning Towards The Lord".

I see that the quote you use has that hoary old chestnut "... his back to the people" !

Who's he BEEN facing, given Deus is in his hands?! (And who's Father Lang been facing if not almighty God?]

Why have the Bishops got all jumpy about the Extraordinary Rite?

Henry - because many of them, sadly, are not Catholics because, even more sadly, they don't realise that to be a Catholic, inter alia, they need to "follow Peter". Some them think they know better Peter.

Henry, I expect because the bishops are weenies. They've persecuted Latin Mass fans so long, and now the Pope has stuck a finger in their eye.

Karen
(I know, I know ... sometimes maybe I sound as if I don't like the Latin Mass -- just for the record, I'm FOR it -- as long as the people going take some time to do a little homework on the Latin. -- otherwise it strikes me as people doing it for the "wrong reason." I don't think that's the case with most of the people desiring it ... but I really don't want to see a return of armies of little old ladies clueless as to what is being said who are doing their beads when they should be paying attention to the Mass - wonderful a prayers as the rosary is, it's not more wonderful than Mass.)

Apologies for being off topic, but there was no discernible means of sending you a private email.

Having just discovered your august blog, one of your posts constitutes the foundation of Cranmer's support for Damian Thompson against clerical interference in a free press.

It is, however, regrettable that in otherwise enlightening posts you include such phrases as:

"Here is what those poor, unfortunate, half-educated Protestants say about the Holy Name..."

Whilst not disputing that some Protestants are indeed poor, unfortunate and half-educated, in is undeniable that many Catholics are also. And yes, Protestants are human and err. But one wonders what your response would be to those Protestants who might judge all Catholics by the theological standards of The Tablet.

Keep up the otherwise excellent work. You are a breath of fresh air.

Cranmer,
If you look again at that particular post, you will note the author is actuially refer to "poor, unfortunate, half-educated Protestants" who are ignorant for the use of the name of "Jesus", and to any other group of Protestants.