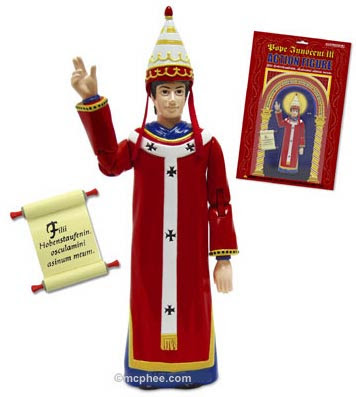 I Googled "Innocent III" looking for the origins of the picture of him in the post below, for Dr Peter Wright, I couldn't find it, in few minutes I had spare but I did find the Innocent III action toy armed a with a bull of Excomunication.
It is only $4.99 for a set of two "with removable Pope hat!"
If the website suddenly sees a rise in sales through advertising here, maybe they could send me one.
I would love it, though it lacks the ears of the original, every Catholic home schooled child should have one.
Here is what the advertisng says is says:

Introduce this Pope Innocent III Action Figure to your other figures and watch the spiritual sparks fly! Armed with his formidable power of excommunication and an intimidating scroll inscribed with Latin text, this 6″ tall, hard plastic model of the 176th Pope will soon have all your other action figures lining up for confession. Read the back of the illustrated blistercard and you’ll find that Pope Innocent III was a good guy in all respects. He was a patron of the arts, cared about orphans, built a hospital and reunified the Papal States! Comes with removable fancy Pope hat.

Compare the shape of the Pallium with that of Pope Benedict.

I have Innocent - I bought quite a few last year as prizes to be given during an "All Souls' Day" party trivia game.

He is great, and we were all going around the room with our Innocents excommunicating each other.

I've found the information I was looking for at www.paradoxplace.com

The mural of Innocent III is by the early trecento artist, Magister Conxolus, between the upper and lower churches of the Benedictine monastery at Subiaco.

Given the date, it must have been painted shortly after the desath of Innocent III in 1216.

I knew I'd seen a picture of this mural, or a similar mural, somewhere.

Apparently, Innocent III was buried in the Cathedral of San Lorenzo, Perugia, until his remains were moved to the Lateran during the reign of Leo XIII.

I'm sorry to take up Fr. Ray's spare time, but the website he found is delightful : an Action Figure of Innocent III !

No Catholic household should be without one.

(I don't know about the singing alarm clock. It depends on the tune.)

Sorry, Father.
I wanted to send you one, but I couldn't get the on-line order form to work.
Perhaps it's because I was trying
to order from outside the U.S.

Wow! I want one too! One of the first essays I wrote as an undergraduate was 'Innocent III: Vicar of Christ or Lord of the World?' Why don't you put Innocent III on your Amzon wish-list, then attach that list to your blog? It works for Fr. Z...

Why does it say: Hohenstaufens, kiss my donkey?

Father! There were at least two gift-wrapped excommunicating Innocenti under the tree in a presbytery near you this Christmas. Every clergy house should have one!