Dawkins: Why not Nazi Eugenics? 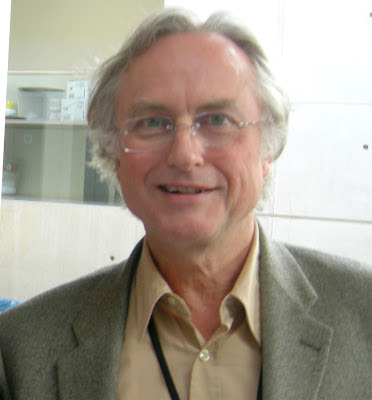 Paulinus has a frightening piece on a young green who went on a killing spree, as a practical way of reducing the population.

He also links to a piece about Richard Dawkins and his attitude to eugenics.

....“if you can breed cattle for milk yield, horses for running speed, and dogs for herding skill, why on Earth should it be impossible to breed humans for mathematical, musical or athletic ability?”
.....
“I wonder whether, some 60 years after Hitler’s death, we might at least venture to ask what the moral difference is between breeding for musical ability and forcing a child to take music lessons. Or why it is acceptable to train fast runners and high jumpers but not to breed them,”

Ideas are lethal, for men like Dawkins it is not just the notion of God that is troubling, and to which he is opposed. He is opposed to the morality that comes from "the God delusion". Ultimately he argues for a new understanding of (godless) Man, unencumbered by the old morality.
I left a comment on Paulinus' blog that simply said, "Frightening... but logical!" The logic of killing "the substandard" is obviously not being advocated by Dawkins, but the logic is that if you set out to breed for particular traits, then you must also stop those with undesirable traits from breeding. As soon as you do that you divide human beings into the worthy and the less worthy, the next logical stage is to segregate and then eliminate the less worthy.
One of the wonderful things about God is that human beings have an escape from the iron logic of the Eugenicist and the Social Darwinist. In order to be saved from the oppression of scientific rationalist there is a serious need for God, simply to introduce irrationality into malformed but rational Scientificism. God is the "joker" in human logic.
at January 08, 2008

What an excellent expose of eugenics Father! It is indeed logical that if we want to breed certain features then we have to cull those who do not exhibit those features. That is how dogs have been bred. And cattle. Only a belief in God and us all being made in His likeness, stands in the way.

Father,
The frightening thing in my view is that it's not strange to hear such talk from people "on the street" so to speak. I hear so often from people I know, "Oh but times are different now" (meaning we've progressed) and all I can do is shake my head. There is alot of confusion out there in people's heads and unfortunately even among those who profess to be Catholic one hears very unCatholic things...

Fr. Your observations are very insightful. Thank you for this post.

Human beings are not animals.

Interesting that massacre by the "Deep Green" happened in Finland. There is, I feel, an odd undercurrent about the country. It is not somewhere I would want to go back to. When I visited there was a display of old military equipment with Swastika insignia. That was in Senate Square, the seat of the government, in the heart of the capital, Helsinki. There is a lot of early twentieth century architecture in the style known as Jugendstil which has a strange overtone. Like this

Partly, it is because the country was too close to Soviet Russia for its own good and was a natural ally of Germany, which does not make it necessarily Nazi. But I suspect there is more.

Maybe Father you are too generous in attributing 'logic' to them. Logic uses firm axioms as departure points, whereas this bunch start from unproven (bad faith) premises: e.g. there is no God; there is no more to man than what can be seen or measured; that as rationalism is a tremendous good therefore there is no greater good.

I reckon many people who reject God do not do so because of a logical process, but because of an emotive idea which is so frightening they repress any examination of it, namely: they don't believe God can love them.

Well, Dawkins spends several tedious pages of "The God Delusion" trying to prove that Hitler was a Catholic, so the "logical" consequence of re-examining Nazi eugenics has to be an admission of the truth of the Catholic Faith!!

See what knots you can tie yourself into when you're such a hopeless philosopher as Dawkins is.

Henry, Finnish swastika's - and in general swastikas traditionally in use befofe 1907 aren't anything to worry about - they're ancient cultural symbols.

But you are mistaken father. The logic does indeed go as far as advocating the killing of the substandard. Just at the moment, it is only allowed to kill the unfit before they are born, but Dawkins could not possibly disagree with his colleague Peter Singer that such a distinction should be removed. After all, infanticide is much safer for the woman than abortion.

Just like their Communist forbears, the agenda of the Radical Atheists emerges only slowly. Witness the one-child policy in China. Atheists are the greatest mass-murderers in human history. And this evil clown, whether as a mere idealogue or as a useful idiot, seeks to replace our morality with the ideology of the Singers, who have suggested that killing a toddler is no more rephehensible than killing an unwanted kitten or puppy. Perhaps he has been invited as an observer to the Jesuit Conclave as an extreme example of ecumenism!