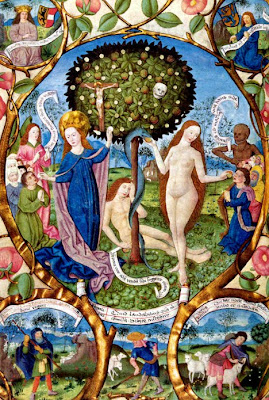 Click to enlarge
This is an illustration from the Salzburg Missal from the Lion and the Cardinal, there is also a tenth century Holy Waterbucket that is well worth a look at.
What delights me here, is that whole lot of very complex theological ideas are communicated by a page of painting.
I have a friend, a seminarian who is dyslexic, he is actually quite bright but he tends not to think "in essay form". He built our crib last year, he has an inredibly strong "visual sense". With a few bits of fabric, a branch of a tree, and a few plaster statues, he created something which spoke very eloquently of the Mystery of the Incarnation. He has had one or two difficulties with his journey to the priesthood so keep him in your prayers, because frankly I am convinced he will make a fine priest, not inspite of his difficulty but because of it.
With the constructed liturgies of the 1960s there is a danger of depending too much on verbal communication and of reflecting the spirit of a paricular age. The iconoclasm that gave birth to brutalistic architecture, to artists like Rothco and Warhol, composers like Cage and Schoenberg seems to have no place for hidden subltleties, I wonder if that is reflected in the work of Mgr Bugnini. It was a "what you see is what you get" age. I suspect we have now moved on from that. What was once fashionable now seems tired. Catherine Pitstock in After Writing contrasts the spiralling of words and actions of organically developed liturgy with the linear, canalised, liturgy we have now.
The lack of precision or care over rubrical actions, by both those who constructed and those who celebrate the present liturgy, perhaps, reflects something of this thinking. Perhaps the lapsation of large numbers of ordinary working class Catholics over the last 40 years might be related to this too.
The great problem with anything put together by "experts" is that they tend to reflect the spirit of the age. Fashions come, fashions go, and amongst the fashions that go are certain styles of thinking. The great beauty of organic liturgy is that it reflects not an age but ages, not a single thought style but thought styles.
at August 25, 2009

Just over 40 years ago a very well known and very musical Anglican priest in Brighton, who had just appointed me organist of his very ultramontane church, told me that he always told young musicians and artists that they should stick to what they believed in artistically, even when it was totally out of fashion, because one day the fashion would change and that opinion would be proved right. We can see that it is beginning to happen with liturgy and we must be grateful.

We live in a world of too many words where people have to have sound and action all the time. This is true both inside and outside churches. About 3 years ago I was at Walsingham praying very hard, telling BVM all the details of what I was praying for when suddenly I got the impression that she was saying to me "Yes, I've heard all you've got to say, now just shut up, be quiet and let me deal with it". It worked - with amazing results for which I am eternally grateful.

As has been recited many times on this blog in recent months, things which are beautiful to see, hear, or even touch, do speak to us in a way that words never can but we need to allow ourselves space, time and silence in order to take it all in. I heard a conducting tutor say the other days that even music needs to begin and end with silence. Very young, noisy chuldren can be reduced to total silence by suddenly coming upon the beuatiful or the numinous. Yet so many people are terrified of silence; perhaps because they are frightened of what they might discover about themselves in that silence.

"The great problem with anything put together by "experts" is that they tend to reflect the spirit of the age."

They don't become "experts" without academic degrees and they don't get those degrees unless they parrot back the academic prejudices of the day. For example, can anyone get a degree in Scripture today without being in accord with the miserable JEPD theory? And why has that theory been in possession within Catholic academe for the past fifty years? Because we want the applause and approval of the secular academy, nevermind that the theory is a faith killer. I really do wonder how many priestly vocations have been killed in the very first days of Scripture 101 in the seminary.

Similarly, we have commissioned many secular architects to design our churches and secular sculptors to portray our saints, because these people had a reputation "in the world." Why are we ever looking to "the world" for guidance in our sacred sciences and art? It is complete madness, and has given us quite a lot of sterile exegesis and ludicrous art.

Malcolm, silence is fine. I'm still not thrilled with a "silent" canon which is more often than not, accompanied by barking dogs, passing ice cream trucks, lawn mowers, fog horns from the bay, crying children, etc. (ALL of which I've heard at a daily EF Mass, though thankfully, not all at once.) I'd rather hear the words the celebrant is saying.

Fr. Blake: What does an agnostic, dyslexic insomniac do? He stays up all night wondering whether or not there is a dog.

Well said Father and Malcolm.
Amen to both of you.
JARay

So apt to mention Schoenberg, Father: he hoped that his man made serialism would supplant organically developed tonality - I never thought of it like that until reading your post! Although his post - tonal music is quite beautiful, it has never captured the concert going imagination the way 'crusty old tonality' has, and we have all but given up on the idea of the music of serious contemporary composers being whistled in the street, as the serialists wrongly assumed would happen.

People who earn their living through manual labour tend to have a less literary or literate approach to worship, the loss of the visual and experiential cannot but be a source of alienation.

The lack of precision or care over rubrical actions, by both those who constructed and those who celebrate the present liturgy, perhaps, reflects something of this thinking.

It's very encouraging that this is now being widely admitted; and it's just as important to acknowledge a concommitant "lack of precision or care" over imagery that preceded it by many generations. Indeed I think it's probably right, historically and theologically, to view the degradation of the liturgical rites themselves, in the second half of the 20th century, as merely the culmination of a process already in motion at the time of Trent. Cardinal Ratzinger touches upon this in The Spirit of the Liturgy, observing that the wholesale rush to abandon litugical orientation, for example, can only be explained by a prior "loss of meaning from within". Far too many churches are either embarrassed, bourgeois-barren whited sepulchers, or filled ad-hoc with trivial, degraded quasi-theatrical junk. Any "hermeneutic of recovery" needs to begin with a serious re-discovery of Nicaea II and the crisis that preceded it.

"He who marries the spirit of the age will be a widower tomorrow". However do not the liturgies of the Early church, the Medieval Church, and the Counter-Reform Church, each relect the particular ages in which they matured? As Newman put it" to be perfect is to have changed often".

Mr Blackman - try reading Sheridan Gilley ( one of Newman's biographers) on class and catholicism. There is quite a lot of scholarly work on the subject.

Mr Gilbert - good universities do not give higher degrees to those who merely parrot back the academic prejudices of the day. Indeed for example the University of Cambridge gives a doctorate only to those who have in its opinion made a definite addition to the sum of knowledge or shown old knowledge in a new light. The thesis examiners are often scholars with a reputation of independence of mind.