(Reuters) - Spaniard Adolfo Nicolas was elected the Jesuits' "black pope", as the head of the largest and perhaps most influential, controversial and prestigious Catholic order is known, in a secret conclave on Saturday.
Nicolas, 71, has run Jesuit operations in east Asia and Oceania since 2004 and spent most of his career in the Far East after being ordained in Tokyo in 1967.
The order said in a statement that Nicolas had been elected to succeed Father Peter-Hans Kolvenbach, who received permission from Pope Benedict to retire as head of the order formally known as the Society of Jesus at the age of 79. 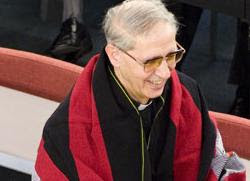 (CNA).- Pope Benedict XVI gave his consent on Saturday to the election of the Spanish Jesuit Adolfo Nicolás as the new Superior General of the Society of Jesus.

The 217 delegates gathered since January 7 for the 35th General Congregation, chose Fr. Nicolás in the second round of voting. Nicolás hails from Palencia (Spain) and was born on April 29, 1936.

The New Superior General of the Jesuits has lived for the past 43 years in Asia, especially in Japan, where he studied and worked as professor of Theology at Tokyo’s “Sophia University”, founded by the Jesuits in 1913.

Nicolás was present at the General Congregation as the delegate for Eastern Asia and Oceania.

The successor of Fr. Peter Hans Kolvenbach joined the Jesuits at Aranjuez (Spain) in 1953, received his degree in philosophy in Madrid and was then moved to Tokyo. Upon his arrival in Tokyo, he completed his study of theology and was then ordained priest on March 17, 1967.

Between 1968 and 1971 he studied Dogmatic Theology at the Pontifical Gregorian University in Rome, and from 1978 to 1984 became Director of the Pastoral Institute of Manila (Philippines).

Fr. Adolfo Nicolás S.J. becomes the 29th successor of St. Ignatius of Loyola and the leader of the Society of Jesus, which, according to their latest figures has 19,126 members.

Out of interest, I did a basic search for any writings of Father Nicolás, yet so far only come on this article. Thought I'd share it.

Seems ok. Can we have prayers for the Js tomorrow? I think they are potentially still a very good thing. They have been through bad patches before, don't forget they were suppressed in the 18th century when they were running what amounted to a colonial trading company, and doing it very well, as they would.

Henry,
I hate to be negative, and I would not say this about other prodicgal order, but the Jesuits need to be supressed. They were created for a purpose, and they simply do not serve it any longer. In fact, the order seems to strive to accomplish the opposite of its mission. Why is this? I think pride. It seems that one becomes a Jesuit when he is sufficiently impressed by his own intellectual accumen that he sees no other option but to join the Society. No doubt one looks at the order's potential, and wishes it was- or could be- what it is not, but at some point its disobedience and distortion confuses and confounds the faithful. That point was reached long ago. We are now in the days when we speak of a school "In the Jesuit tradition" without implying anything Catholic at all. The order is disordered.

Shouldn't we remember that the newly-elected General of the Jesuit Order has been accepted by the Holy Father to fill the office? If he had doubts he could have refused the nomination.

I wonder why I could find no reference to the Superior (or do I mean the Provincial ? Sorry) of the British province on their website ?

I don't even know his name.

BTW, can they tell me how many S.J.s there are at Stonyhurst which I see they still list as a Jesuit school.

I understood it was now a Catholic school under a lay headmaster.

I thought Beaumont closed in 1967.

Are there really any S.J.s still teaching at Wimbledon. And at St. Aloysius, Glasgow ?

All these are listed as Jesuit schools on the map at their website.

And somehow, I don't believe that map.

At present, I am under the impression that there are no public schools left in England for the education of the sons of Catholic gentlemen, other than the Benedictine public schools of Ampleforth and Downside.

I thought the S.J.s wanted "out of" this scene back in the 1960s and 1970s in favour of missionary work and social work amongst the poor in Third World countries.

(Nothing wrong with that, of course, but their website gives a different impression.)

Perhaps I am wrong ?

For more on the Jesuit election go to http://andrew4jc.blogspot.com.
Full story and pics of all the J's wearing black suits and collars. Fr Nicolas looks a nice guy.

Dr. Peter, why do you not believe the map on the Jesuit site? Do you think they are lying?

The reason why these schools are still listed as Jesuit schools on their website is that the Jesuits are still the trustees (and more than likely the owners) of the said schools, and as such wish to continue to foster there an Ignatian spirit in collaboration with lay colleagues/successors.

Here in our De La Mennais Brothers school in Liverpool (founded by the Js in 1842, handed on to us in 1974) there are 3 Brothers teaching under a lay Head Teacher (the first at the school) who has been in situ since 2005. The Brothers are still trustees of the school and 3 of us (inc. myself) sit as School Governors. As such, we do our best to help the school embody the Christian educational principles laid down by our Founder, Jean-Marie De La Mennais (heavily influenced by Ignatian spirituality). This is frequently the case in other parts of the world, eg. in Brittany we have a very successful formation centre to train lay teachers and Brothers working in De La Mennais Trust schools in the spirituality of our Founder.

Jesuits do the same in the schools mentioned on their websites, even though they may not hold Headships any longer. I am sure there are still some individual Js involved as teachers and/or Chaplains in these schools. Until recently, a former fellow student of mine at the Parisian Jesuit scholasticate (Centre Sèvres) Fr. Matthew Power sj was heavily involved at Stonyhurst. I think he is now based at Loyola Hall retreat centre, but as you can see on the Stonyhurst web site

he is still very involved with young people.