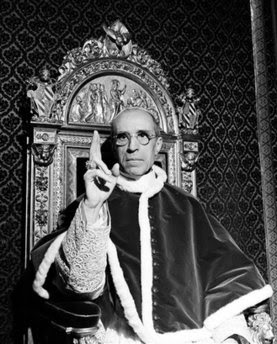 Are Saints perfect?
I love Saint Jerome, partly because he was so bad tempered. There is the story that Pope Honorius was passing an icon of Jerome beating his breast with a stone, and said, "Ah, Jerome but for those stones you would be in hell rather than heaven". The Blessed Margaret Pole in her old age did not go quietly to her death but had to be physically restrained by the axeman. Newman could be a passionate friend but an equally passionate enemy.
Even the Holy Apostle Peter, not only denied Christ three times, but was rebuked by Paul for eating and drinking happily with gentiles and some Jews turn up and then becomes hyper Kosher.
In the controversy over Pius XII what are we concerned about, is it that he was perfect every human way or that he is heaven? Like every human he is complex, he was a hypochondriac, into rather odd therapies, he had that strange woman, the "Papessa" bossing him around, he seemed to be almost childlike with his pets, apparently he used to practice posing for the cameras in front of the mirror.
The whole issue of Pius XII and the Jews is complex, primarily he was a diplomat, used to working with nuanced speech and action behind the scenes. It cannot be denied that he worked tirelessly for the Jews of Rome and Italy, having them hid in convents and monasteries, through out Italy, the city and in the Vatican itself.
It is however true that never during the war did he actually denounce the persecution and murder of the Jews. It seems unlikely that he was unaware of concentration camps, he might have lacked certain knowledge, or even have disbelieved the reports he received. It is certain that the Nazis regarded him as an enemy. My personal thoughts are that he simply did not know what to do, that he feared direct opposition to Hitler and his policies would bring down even worst horrors not just on Jews but on Slavs and Catholics in general. His speaking out would do little good except to undermine the little influence the Church actually had. Undermining Hitler's power base by excommunicating Catholics who supported him, or fought in his army would have opened Europe to Stalin who was not just an atheist but an even worst mass murderer.
Until the publication of "Hitler's Pope" in the 1969 Pius XII was lauded by Jews and Christians alike. He was certainly not Hitler's Pope but I suspect he was a man unable to comprehend the evil that was before him.
Holiness is not about a success, it is about trying to co-operate with Grace, heroically battling with oneself. The very contradictions, the objections to Pius' beatification convince me of his holiness.
What those who examine his cause should be concerned with, is simply to ask, "Is he in heaven?" and "Is he an example of Christian perseverance?"
Posted by Fr Ray Blake

Au contraire, he knew exactly how to react - and he took the path that got less Jews killed.

This article is one of many that references why he reacted the way he did and the following salient point is taken from it:

"As pope during the war Pius worked under terrible constraints. When the Dutch bishops in 1942 spoke out against the deportation of Jews there were savage reprisals. Eventually 79% of Dutch Jews were exterminated, the highest percentage of any European country. Jewish leaders themselves did not want Catholic bishops or the pope to be too explicit in their condemnations."

I think your words are well placed, and I particularly like the way you point out that saints are not perfect. It is easy to pass judgement on former generations when we have not lived their lives.

Of course the Church probes the life of a man or woman proposed for canonisation. Inevitably, it will find faults, failings, human weakness.

But the central questions remain : were they servants of God, were they martyrs, confessors, did they display heroic virtue.

We all aspire to perfection, but few, if any, achieve it on earth.

When people criticize Pius XII's War record apart from trying to restrain the urge to go off pop, I wonder what they are doing to alleviate all the Human Rights disaster situations of the present day.

He must have been a wonderful Pope for people to be so awful about him now. People who do a great deal of good always get attacked.

The first real criticism of Pius XII surfaced in the 1960's with Hochuth's play "The Representative". Its theme was taken up Communists to undermine the Church in Eastern Europe and by secularists everywhere. In the early 90's renegade catholic ex-priests found it a useful tool against the then Pope as an example of the misuse and non-use of authority by a predecessor.
Interestingly enough since then some eminent Jewish historians have defended Pius. Churchill's biographer, Sir Martin Gilbert , is on record as defending the Pope, and Rabbi David Dalin has written a book entitled "The Myth of Hitler's Pope". It would seem to me that Pius realised that any denunciation was likely to be counterproductive as in the Netherlands when the Church denunciation of the Nazis led to an intensification of the deportation of the Jews who included the Catholic philosopher St Edith Stein. Also it has been suggested by Owen Chadwick that the Nazis were reluctant to excommunicate the Fuhrer because such a policy had been a failure against Elizabeth I and had led to schism.

Sorry for the howler in my last post - I should have said" the Pope was reluctant to excommunicate the Fuhrer". Very properly one must -delete Nazis, insert Pope.
Is there a moral here?

My own memory of Pius XII is of seeing him in St. Peter's in 1950. I was part of a large contingent of Boy Scouts who travelled to Rome for the Holy Year. Everyone thought that he was a very special person indeed. I was thrilled.
Of course, I had never been overseas before and I was a schoolboy. We went on from Rome to Switzerland. The whole journey was the thrill of a lifetime. The war was still a close memory and there we were travelling through Europe. We had two special trains for our travel through Europe and a special ship to carry us across to France. I think that there were about 1,500 of us.

The story about Bl Margaret Pole running away from her executioner is a 17th C. Protestant fabrication.

The book with the outrageous title "Hitler's Pope" was published in 1999 not 1969. In any case the author got the wrong clergyman, he should have written about the Grand Mufti of Jerusalem who chided Hitler's for not being harsh enough to Jewish children. According to Rabbi Dalin some were born in the Papal residence where their parents were sheltered.

Yes St. Jerome was quite a saint - warts and all - and he didn't take too kindly to that 'upstart' Augustine...

Padre Pio was also known for bouts of bad temper. He was still living when I was in Rome and someone at our seminary suggested paying him a visit. However, one of the Italian seminarians said "No, he tells religious to go home and live their Rule instead of coming to see him!"

Of course if I had holes in my hands, feet and side I might not be 'all sunshine and light' either!

Pius XII was the Pope of my childhood and revered as a saint by my mother, who always referred to him as "Poor Pope Pius..." He has been badly treated by the revisionists since his death. I pray for his canonization.

The Late Pope Pius XII of holy memory lived a saintly life, protected Holy Church and kept intact the Deposit of Faith. He also unstintingly succoured and protected Jews in the name of our Lord Jesus Christ even though they refused to accept the Pope, his teaching or his Church.

Pope Pius was no hypochondriac! Father, have you been reading some calumnious and bad books? Perhaps one by Noel? Another hater of Pius.

I have always had a problem over Cardinal Newman. He seems to have been a rather morose character. One thing is certain against him and that is that if his friends appeared to have deserted him, he would never speak to them again.
The list includes Fr. Faber, Fr Dalgairns (of Oxford oratory), Fr Coffin (later Bishop) for joining the redemptorists. He got very depressed when things went against him. Even though I do not suspect him of an improper relationship, what he says about Fr.St.John seems to me to be over the top.