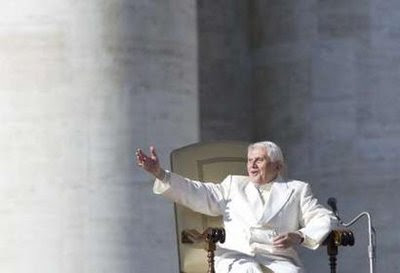 Pope Benedict XVI was the first to predict the crisis in the global financial system, a "prophesy" dating to a paper he wrote when he was a cardinal, Italian Finance Minister Giulio Tremonti said.
"The prediction that an undisciplined economy would collapse by its own rules can be found" in an article written by Cardinal Joseph Ratzinger, who became pope in April 2005, Tremonti said yesterday at Milan's Cattolica University.
German-born Ratzinger in 1985 presented a paper entitled "Market Economy and Ethics" at a Rome event dedicated to the Church and the economy. The future pope said a decline in ethics "can actually cause the laws of the market to collapse."
Pope Benedict in an Oct. 7 speech reflected on crashing markets and concluded that "money vanishes, it is nothing" and warned that "the only solid reality is the word of God."
The Vatican's official newspaper, l'Osservatore Romano, on the same day criticized the free-market model for having "grown too much and badly in the past two decades."

It was clear to all what was going to happen.

The SPIV's & Wideboys just upped the tempo & filled their boots,offers of instant loans were still going out until the very last minute.

Now it's the turn of the pestiferous debt counsellors,credit advisors and the scum of the earth Bailiffs.

Society the way it is is turning greed into a virtue.

The best prediction came from an economist called Fred Harrison. Several years befor the events, he predicted to within a few months both the 1992 and present recessions - this one will not bottom-out until 2010. He attributes it to the interaction of the land (housing and shares) market to the banking system, the fatal activity being the purchase of land titles using borrowed money.

The Pope is of course correct in a broader sense, it being a collapse in ethics. One can be more specific. The nature of the collapse is the buying and selling of land, which is a gift of God. (Ps 24:1 - "The earth is the Lord's and its fullness").

Sadly, Catholic Social Teaching has been wooly on the subject, starting with Rerum Novarum which asserted the right to ownership of property. It then became necessary, in subsequent encyclical documents, to backtrack by pointing out, quite rightly, that property ownership carried duties. But there remains a need to clarify the issue. In the light of the present problems, and growing environmental and social problems, that need has become urgent.

Blame should not be confined to those who offered loans and mortgages. The so-called ninja mortgages, no job, no income, no assets, were in the USA strongly backed by the Clinton government on the grounds that they gave access to home-ownership to ethnic monorities which otherwise would be cut off from the market. Both the Republican government in the USA and the Labour Government in Britain(so it is not really a party matter as in both cases the oppositions colluded with the governments )inflated their Public Sector Borrowing Requirement so that spending was much greater than income.Budget surpluses became a thing of the past. It became fashionable to live above one's income and debt lost its stigma.

An older generation lived within its means, and the present desire to live above one's means is certainly the result of greed, but it is almost universal and not confined to lenders. Society as a whole should not seek a scapegoat for its own failings.