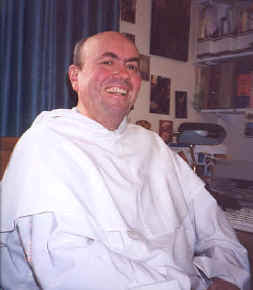 Bishop Malcolm McMahon has apparently said he thinks married men should be ordained priest. He comes out with the usual thing, nowadays, that celibacy is purely disciplinary, and not de fide, or even theological.
Well I am not exactly sure. Throughout history the two have been so closely linked. Obviously celibacy is not of the essence of priesthood but the relationship between the two seems to taken far too lightly. The custom in the early Church seems to have been that although married men were ordained, after marriage they were expected to remain celibate, as were the priests of the Old Testament during their time of service in the Temple.

Jesus speaks of those who would remain celibate ("eunuchs") for the sake of the Kingdom of God (Mt 19:12).

St. Paul not only continued his pre-conversion celibacy as a Christian but recommended it for those who would be dedicated to serving God in this world (1 Cor. 7:7, 17, 32-35).

Tertullian comments with admiration upon the number of those in sacred orders who have embraced continence (De exhortatione castitatis, cap. xiii),
Origen contrasts the spiritual offspring of the priests of the New Law with the natural offspring begotten in wedlock by the priests of the Old (In Levit. Hom. vi, no. 6).
Eusebius declares that it is befitting that priests and those occupied in the ministry should observe continence (Demonst. Evangel., I, C. ix)
St. Cyril of Jerusalem urges that the minister of the altar who serves God properly holds himself aloof from women (Cat. xii, 25).
St. Jerome further seems to speak of a custom generally observed when he declares that clerics, "even though they may have wives, cease to be husbands".
St. Epiphanius speaks of the accepted ecclesiastical rule of the priesthood (kanona tes ierosynes) as something established by the Apostles (Haer., xlviii, 9), in a later passage seems to describe this rule or canon in some detail. "Holy Church", he says, "respects the dignity of the priesthood to such a point that she does not admit to the diaconate, the priesthood, or the episcopate, no nor even to the subdiaconate, anyone still living in marriage and begetting children. She accepts only him who if married gives up his wife or has lost her by death, especially in those places where the ecclesiastical canons are strictly attended to" (Haer., lix, 4). Epiphanius goes on, however, to explain that there are localities in which priests and deacons continue to have children, but he argues against the practice as most unbecoming and urges that the Church under the guidance of the Holy Ghost has always in the past shown her disapproval of such procedure. But we need hardly insist that all this is very inadequate evidence (even when supplemented by some few citations from St. Ephraem and other Orientals) to support the contention that a general rule of celibacy existed from Apostolic times.

Does not celibate mean unmarried for religious reasons? Chastity is expected as a matter of course. Celibacy is not a synonym for chastity. A non-celibate ministry merely means an married one ,not one committed to unchastity. One hopes that a celibate one is always chaste.

This nonsense is getting very trying. I don't think our Bishops have enough work to do.

Celibacy in the Church is the deliberate of abstaining from marriage,and therefore sex or for those who are married, abstaining sexual activity.
All are called to chastity, according to their condition, some are called celibacy

Thank you for your definition Father Blake although I am a little puzzled how a married person can be classed as celibate even if he or she abstains from sexual activity. The etymology is quite clear. The populat press uses celibacy as a synonym for chastity.

What these patristic references show is that those who were married embraced a life of celibacy on ordination.

I think that I agree with volpius leonius. The tradition of the Church is well founded.

Are Eastern Rite Catholic priests required to be celibate, or do they have the same discipline as the Orthodox? If it's the former, then presumably the rationale behind celibacy in the West really is disciplinary (and customary) rather than theological. Not that that's a reason for changing what is, after all, an ancient and venerable custom.

Regardless of our own thoughts on the relationship between and celibacy/marriage, the official teaching of the Church is found in Vatican II's decree "Presbyterorum Ordinis" paragraph 16. As Catholics, it should be our position.

"Celibacy is to be embraced and esteemed as a gift. Perfect and perpetual continence for the sake of the Kingdom of Heaven, commended by Christ the Lord and through the course of time as well as in our own days freely accepted and observed in a praiseworthy manner by many of the faithful, is held by the Church to be of great value in a special manner for the priestly life. It is at the same time a sign and a stimulus for pastoral charity and a special source of spiritual fecundity in the world.

Indeed, it is not demanded by the very nature of the priesthood, as is apparent from the practice of the early Church and from the traditions of the Eastern Churches, where, besides those who with all the bishops, by a gift of grace, choose to observe celibacy, there are also married priests of highest merit. This holy synod, while it commends ecclesiastical celibacy, in no way intends to alter that different discipline which legitimately flourishes in the Eastern Churches. It permanently exhorts all those who have received the priesthood and marriage to persevere in their holy vocation so that they may fully and generously continue to expend themselves for the sake of the flock commended to them."

Note that the final sentence is directed at the married clergy of Eastern Rite Catholics as the influx of Anglican clergy had not, at that time, taken place.

Don't forget to sign the promise to Live Chastely!

Mark it is the former, but it does not follow that it is merely a disciplinary matter.
In many parts of the East the theological formation of married clergy, permission to preach etc is of recent origin.

Can't he please just shut his mouth! Sorry Fr but....

The second Vatican council quite clearly says that celibacy is a discipline rather than something which flows froms the essence of the priesthood. Of course over the centuries many spiritual, as well as practical, benefits have identified with the celibate state. At the same time a theology of celibacy has also developed but this is surely a secondary aspect. We cannot get away from the fact that there are validly ordained married clergy. So celibacy is a gift but not an essential component of priesthood.

Jackie - I'm with you on this one!
Volpius leonius and JARay - typically on the ball with this one, agreed in full!

Thank you for setting out the arguments intelligently and concisely. This is a big issue in my former parish - and I have been called a reactionary bigot for daring to refuse to sign a petition on the matter. I can't remember the exact quote but it goes something along the lines of "what starts as permitted goes on to be expected, and then to become obligatory". My respect for those who sacrifice their personal lives for their vocation is absolute, and reminds me, when tempted to criticise any of their human weaknesses, that they were strong enough to do something I could not.

Wasn't so long ago that people on here and other sites were lauding this man after celebrating the Tridentine Mass at a training week for priests. Some ever went as far as tipping him for Westminster. How the wind has changed!

Is it not the case that celibacy became obligatory for secular clergy only after the Second Lateran Council in 1139? Indeed not until after the Council of Trent in the 16th century was it successfully imposed, with much resistance from the Basque country and the German clergy. When the Papal Nuncio surveyed Salzburg in 1581 he found that fewer than 10 out of 220 parish clergy in the Styrian jurisdiction did not have a concubine or claim to be married. The Archbishop set an example by having a concubine and 15 children.

The testimony of the Church throughout the ages would appear to be somewhat mixed.

Good grief. Who'd marry a man with such ridiculous teeth.

the bishops recently spoke in Rome and confirmed the dignity of the celibate priesthood. it is both counter-culutral and of deeply spiritual significance that a man can leave all to serve the Church as Christ's priest - as a young priest who is very happy with the choice he has had to make bacause he is called to the Ministerial priesthood, i find this discussion to be somewhat fruitless from the point of a discipline - we are not pragmatists, we are Catholics.

Pastorparvulus - a huge Hurrah!!!! for our courageous Catholic young men who have chosen to follow Jesus into the Priesthood. Our prayers are with you.

Well said - the Church does not need any more pragmatists, always ready to fudge any issue, just well formed and obedient Catholics capable of making sacrifices for Our Blessed Lord because they love Jesus with a heart that is on fire for him.

God Bless you all.