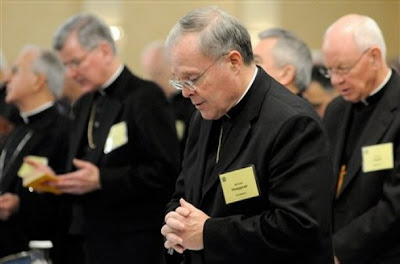 The US Bishops are meeting at the moment, there are interesting rumblings following the election of Mr Obama.

The nation's Roman Catholic bishops vowed Tuesday to forcefully confront the Obama administration over its support for abortion rights, saying the church and religious freedom could be under attack in the new presidential administration.

In an impassioned discussion on Catholics in public life, several bishops said they would accept no compromise on abortion policy. Many condemned Catholics who had argued it was morally acceptable to back President-elect Obama because he pledged to reduce abortion rates.

"I cannot have a vice president-elect coming to Scranton to say he's learned his values there when those values are utterly against the teachings of the Catholic Church," Martino said. The Obama-Biden press office did not immediately respond to a request for comment.

Archbishop Joseph Naumann of the Diocese of Kansas City in Kansas said politicians "can't check your principles at the door of the legislature."

more here
It seems as if we can expect their Excellencies to become a loyal opposition on life issues and the misrepresentation of the faith. Their example is bound to have a knock on effect on our own bishops.
at November 12, 2008

I get the feeling that Obama also wants to silence dissent. See link below.

The USCCB is like the UN all 10 gallon hat and no cattle. If they actually MEANT what they said, Biden wouldn't receive Communion until he saw the error of his ways. Ditto Pelosi, et al. Why Congress would need to fund alternative fuel research I have no idea, given the amount of hot air blown around by the bishops.

It's not enough to "say something" - DO SOMETHING. NOW.

Did you read what Bishop Hollis said ? utterly depressing and outrageous...

The politicians in the USA will use the excuse that they must not act on principles promoted by religion that are not shared by the wider electorate. Such an excuse would have stopped Wilberforce in England from abolishing the slave trade, and kept slavery in the USA safe from the Abolitionists. It would have prevented Shaftesbury in England from promoting his reforms which went against Classical Economics. It means that Christian politicians are barred from acting according to their consciences., and nullifies any Social teaching by any church.

What's also interesting is that all of this took place in public - the whole debate was relayed on EWTN - and fascinating viewing it was too.

What a contrast between the US bishops and our own. In the US, the bishops are happy to debate in public; the flock get to see what their bishops think. The bishops in the US are clearly an open and faith-filled bunch, even when they disagree.

Here in the UK, our lot are behind closed doors at Hinsley Hall. How many of us even know our bishops are having their twice-yearly meeting, never mind the fact that we never get told anything meaningful about what takes place at the meeting? One gets the impression that they are rather closed in on themsleves and, perhaps, a bit afraid of themselves. Can you imagine any of them congratulating Bishop O'Donaghue, for example, even in private?

USCCB needs to be dissolved, or decreased dramatically. What good is it to stand and say abortion's evil, when you're participating by alloiwing pro-abort's to receive Communion.

On the side of theAngels.
Please where did you find out what Bishop Hollis said ? I have not seen it .