My Will: Black Shot through with Gold 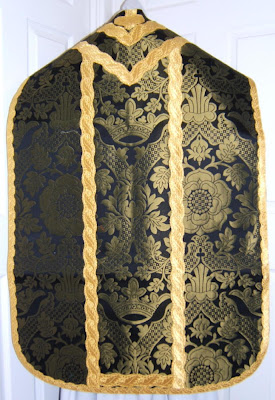 November always, as it should, gets me thinking about my own death. I have been nagging my people about remembering the Church in their will, and I haven't yet written mine. There is not much to leave an icon or two, a few musical instruments, some vestments.

What I want to spell out is my funeral. I am well aware that the Lord has poured out grace upon grace in my life and my response has been pretty mean spirited. I am conscious of the words, "to him who has been given much, much will be expected", well I have been given much.

I have read about saints, I haved lived in the company of saints since my baptism, I have met a few and I am definitely not a saint. Through the grace of God, and the sacraments, I am faithful and one day I will be one of the faithful departed, unless of course I die in mortal sin.

I dread that the modern practice of canonising everyone might creep into my own funeral. I want prayers and lots of them when I die. It might be impossible to stop concelebrants turning up in their white polyester chasubles but

I want the chief celebrant and assistants to wear black,
I want unbleached candles
I want, if possible, a black pall over my coffin
I want the Office of the Dead sung around my coffin
I want the Dies Irae
I want the traditional chants of the Mass
I want someone to preach on the vices of the priest Raymond Blake, the soul who is much in need of our prayer. A friend suggested I might even write the homily myself or even leave a recording, a voice from beyond the grave, a pre-timed recording coming from the coffin! Maybe the best thing might be not to have a homily at all. The alternative is to get a priest who fundamentally disagrees with me to preach.

Death is not, as that ridiculous poem says, "nothing at all". Death is catastrophic, as Jesus' death was. The gloom of death, the seperation from the living, the decomposition of the grave, the isolation - we go to the grave alone, means death is the ultimate powerlessness. For those who loved the deceased the pain is excruciating, death is something to be feared, it is terrifying. It tears the deceased from the living, as it tears hearts apart, as it tears the soul from the body.

Jesus' death gives hope in tragedy, it changes everything. The dark night is shot through by the eastern rising sun. The stinking flesh of the grave is called to life. The sinner is touched by grace. The black mourning clothes are shot through with gold. And the dead are raised to Life!

And even my death, the result of my sin, Christ will triumph over!
at November 02, 2008

Can I have similar arrangements when I go.

I have forbidden the world 'celebarte his life', during the liturgy they can pray for my soul. They can celebrate my life with the substantial amount of money I will put over the bar at the funeral tea.

Good stuff, Fr. Ray... but no, you don't want a priest who disagrees with you... he'd probably be a trendy liberal who'd canonise you on the spot because "you can't speak ill of the dead, can you?"

Stick to black-vestment-wearing traddies who'll tell everyone in no uncertain terms that you're cooking in Purgatory... if they're wrong, then none of the prayers will go to waste as they'll merely be passed on to benefit some poor forgotten soul...

St Raymond, pray for us!

I don't know if priests are allowed to do this, but it seems the only person you can trust faithfully to execute your funeral in accordance with your wishes (as long as you are paying for it,) is your solicitor. Once he has accepted your instructions, he is obliged to follow them.

Family of the deceased, I regret to say, often have their own agenda.

A layman or laywoman can thus stipulate : no white vestments, no jollifications, a requiem Mass with black vestments, prayers for the dead. No eulogy.

Even so, there still remains the question of finding clergy willing to oblige.

I fear that in the diocese of A and B the main problem is that what you desire amounts to an old rite Mass with old rite traditions.
Laity are now allowed this of course but as for priests, the diocese is likely to demand a concelebrated Mass in New Rite which does not allow for the Dies Irae but would all for the other ordinary parts in plainsong. I was thinking of same problem recently

Fr Ray,
"I desire that My Funeral Mass and all its associated ceremonies be sung according to the Extraordinary Form. Furthermore I direct that every bishop or priest present in choir at my funeral be given the sum of £10 from my estate to offer a Mass for the repose of my soul."
That should put the cat among the pigeons! I'm sure a solicitor could turn it into the appropriate legalese!

My black vestments are shot through with silver - and gave a poor woman the fright of her life this morning - I thought she was going to expire as she muttered about "not having seen black for years, where's the white etc, etc." I will explain to her at the nearest opportunity that the Church of the 1970's is dead - and we'll wear black to celebrate!

Father, that's the sermon written, then, and Peter H Wright has told you how to get the solicitor to ensure that rules will be followed. I am sure you can find an interesting precedent in which a "friend of the deceased priest" celebrated the Mass.

Don't go just yet, though.

I do hope the day of your funeral is long off.

The last funeral I went to was Novus Ordo but hardly typical: black vestments, G.F. Anerio's Requiem, facing east, a Westminster auxillary bishop using a faldstool and the Dies Irae was sung. This for a rather eccentric and profoundly liturgical Irishman. The Westminster bishop gave a truly scintillating homily wherein every word had been carefully chosen to weave a rich and highly accurate picture of our mutual friend.

I was contemplating donating my overdraft but the Bank has kyboshed that idea by cancelling it.

I now pray to St Antony that I might have something to leave,things should improve within the next 3 decades,providing of course that I can stop smoking.

We do not want to lose you yet Father Ray but when that day comes it is guaranteed that there will be standing room only.

Sorry, it's me again.

Fr. Ray,
Could I heartily echo the comment by ttony and others : Don't go just yet, will you ? Please.

I second your wishes, Father! As for the homily, I would want it to address Purgatory and the Communion of Saints. Any reference to me should be brief, as in: "He was a sinner and while we hope he is in Heaven, most likely he is in Purgatory. Pray for him - always".

Then I would want thousands of In Memoriam cards printed up and distributed - with the admonition to include them in people's missals as a reminder...