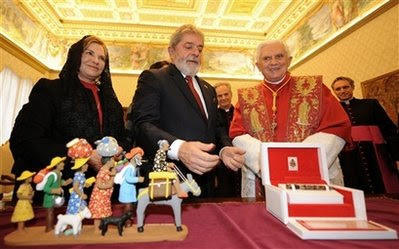 Brazilian President Luiz Inacio Lula da Silva, during a meeting at the Vatican, Thursday Nov. 13, 2008. The Vatican and Brazil have signed a landmark agreement that will allow religious education in the public schools of the world's largest Catholic country. The deal was finalized during a visit to the Vatican Thursday by Brazil's President Luiz Onacio Lula da Silva. He met with Pope Benedict XVI and then joined a signing ceremony.
.... and exchanged gifts
at November 13, 2008

Religion in public schools....but then again, that can be gotten away with if your nation is 90% Catholic. Hopefully this can spread to other countries...and the teachers teach the Faith, faithfully.

But what "religion" will they teach in these schools? Will they teach the Catholic faith, in a country that is already infested with heretical evangelical sects?

Why does the sovereign pontiff have to sign an agreement with what was once a Catholic nation, to teach the faith in schools?

I don't think Pope Benedict can expect an honest agreement from a left-wing president...

It's a move towards the better! It's good to see a nation back religious education, hopefully correct Catholic education, in its public schools. The idea to present it as an agreement between Brazil and the Vatican is an excellent example for other governments and countries to follow. It's a public relations triumph!

I think the agreement signed between the Pope and President De Silva, reinforces Brazil's commitment to teach the Faith from the Catholic Cathecism.

Let us not worry about the infestations of the heretical sects, but pray for Catholic Orthodox to prevail! Let us also pray for world-wide acceptance!! Peace and Love to All!!!

What ARE those gifts? I agree with ponte sisto.

I really must get my eyes tested. When the comments for this post came through in Outlook, I was convinced it said, "LULU meets Pope" and it got me wondering whether he was to be entertained with her trademark song, a selection of the lyrics to follow:

Well.......
You make me wanna shout
Look my hands jumpin'
Look my heart's thumpin'
Throw my head back
Come on now.

BTW, Father, your name has again entered the Westminster stakes over on Holy Smoke. Shall I polish up those American-style election buttons again? ;-)

Sorry, for lowering the tone.