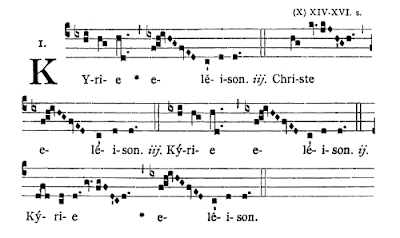 Last Sunday for the first for twenty years or so we had the Orbis Factor. Except in Lent and Easter we normally have Missa di Angelis. I am not one of those snobs who mutter: it is so late that it can't be considered chant, but I do think it does go on a bit especially during the Sanctus and Agnus Dei. A friend of mine likens it to knotweed, once it is in your garden it is almost impossible to get rid of it. Purists will be shocked but it is Orbis Fasctor until Christmas.

I love certainty of this music, the certainty of Divine mercy, the sense of the weight of the reception of Gods mercy. The word "eleison" has a connection with olive oil, the sinuous melody seems to be like thick olive oil penetrating into the soul, healing and cleansing. The rise on the last syllable of Christe seems to be about a drenching in the oil of mercy.

One of the nice things about the Traditional Rite of course is the Penitential Rite and absolution is a private affair, for the priest and server at the foot of the altar, a preparation for Mass, so the Kyrie becomes a triumphant proclamation in which the Christian prays and as he prays, he receives. The priest might mutter about his sinfulness under his breath but in the "congregation of the Redeemed" he and the congregation proclaims God's mercy. In the Novus Ordo the Penitential Rite, is the first part of Mass, when priest introduces it in his own words, it can become downright tedious, almost Pelagian.

The one thing about music during Advent and Lenten times is that it's a bit more solemn, and for this Orbis Factor is perfect.

I hate the introductory speech some priests give before the introduction to the NO Penitential rite...It does go on forever. I wish the priests would stick to the words that are in the Missal

I'm sorry, but "Orbis Factor" should be the name of a cosmetics company.

I intend going to another church for midnight Mass. We intend singing Kyrie fons bonitatis which is Mass II.
I get Richard's joke, but Maker of the World is hardly Max Factor, or is it?!

We were blessed to be able to attend the Tridentine Rite in Liverpool last weekend. Using the Latin Mass Society booklets we managed to keep up for most of the time and were astounded by the richness of the prayers and their theological content. At the end one felt that one had truly, fully and actively participated with the heart in the liturgy and the whole Mass had been a 'work of prayer.'

Regarding pelagian input, I recall one priest at Ushaw about 10 years ago who used to insist at the enforced weekly 'beanbag and coffee table Mass' that 'Sisters and Brothers... you ARE worthy to receive the Lord!'

Thankfully, those days seem to be receding away to become an unhappy footnote in Church history.

Yes, the Orbis Factor is definitely a bit "much," but so is the Angelis, and it is very nice to have a change from time to time, especially since Mass VIII is done almost everywhere. To those unfamiliar with chant I describe Mass VIII as the "Mass of Creation" of chant.