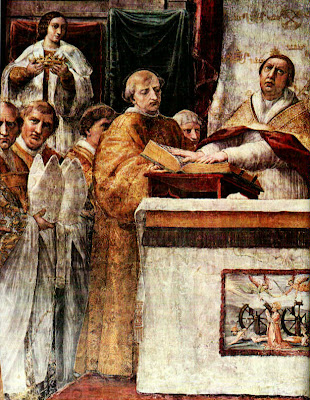 Paulinus expressed a little shock and horror at a doctor who took an oath of loyalty to the Crown and publicly broke it.

Father Roy Bourgeois promised obedience to the authority of the Church and yet took part in a non-Catholic female ordination, at which he preached.

Fr Peter Dresser in Australia preaches and writes the that Jesus is not God, yet says the creed every Sunday.

The Financial Crisis is based on people making contracts to pay back loans and then defaulting on the debt.

One (or in fact several) of my parishioner's husbands has been having an affair despite the promise he made of lifelong commitment.

I know it is simplistic to expect people to keep their oaths and promises, and their word but at the root of the great crisis in both the Church and the world is simply a failure to keep one's word, to be truthful.

The disillusionment with politics, and with so much else in the UK is based on a breakdown of truth and therefore trust, it is this which is at the root of moral relativism. Where there is no Truth and honesty, there is no trust and ultimately no communication, and therefore society itself breaksdown.

It is almost commonplace on religious blogs to have people claiming to be super-catholics who nevertheless reject the teaching of Vatican II on religious liberty and ecumenism. They obviously reject the Holy Father's statements on the subject of the Jews. Yet they claim to be catholics.

Is there any difference in principle between them and the liberal catholic priests whom you quote as rejecting the magisterium?

I write as an outsider who greatly admires the Pope. His word is obviously his bond. He sees his office as bearing witness to truth. I wish I could accept his full authority.

I think it is also true that Truth comes before Unity

The 10 Commandments have been forgotten the same as the Times-Tables,the young don't feel they have to remember anything anymore ,memory will soon be a thing of the past,Alzheimers commonplace.

Good old-fashioned teaching is what is needed and the 10 Commandments which are probably not even mentioned in schools now in case it frightens the horses or upsets some GREEN,VEGETARIAN,SECULARIST COMIC SINGERS

IPI
Yes, the difference is that the priest is aware of the teaching, the others I would presume are not.

Is this what is know as "cognitive dissonance"?

I just read about the US priest ordaining women. He describes it as wrong to deny 'God's call' to these ladies and for the Church to interfere with the divine plan. Err...He above all should know that the Church has been guided into all truth by the Holy Spirit! He is putting his own opinion regarding women priests above that of the Church!

In partibus infidelium said, 'I write as an outsider who greatly admires the Pope..... I wish I could accept his full authority'.

Swim the Tiber my friend, from what you say and the fact that you are visiting and commenting on a good Orthodox Catholic blog you may be closer than you think. God Bless.

No, Father, the Financial Crisis is due to greedy brokers in the US selling mortgages to people who didn't have a cat's chance of repaying them.

These mortgages were packaged together and sold around the world as securities. When the underlying loans went bad, the banks that had bought them didn't know which of them were holding how much bad debt.

So the banks stopped lending to each other, and then stopped providing credit to business on the same terms.

I strongly suspect that financial systems which practise usury (the taking of any interest at all) are doomed to crisis one way or another.

Yes Michael!
The Financial Crisis is due to greed and lies.
"Mortgages ...sold around the world as securities" on false promises, with the poor souls who were conned into taking out these mortgages also being the victim of false promises.
And the banks stopped lending to one another and offering credit because of a breakdown of trust!

Self indulgence can have deep and lasting consequences, whether it be personal or intellectual. It is very easy to cause wounds and very hard to heal them. Similarly it is very easy to spread falsehood and much harder to refut it.

Perhaps have we all come to expect too much. We are no longer content with the things that really matter - peace, love, stability, security. In seeking more we destroy all.

Not sure how relevant that is but it is what came to me and it is from the heart.

Ah, Father, it is not simplistic to expect people to keep their word. God spoke and creation erupted; God spoke again and the Word became flesh, full of grace and truth. Christ spoke and people were healed.

Words have power, revealing who we are; that is why spilling them without thought can manifest division - even hatred - and contribute to the Culture of Death to which you recently referred.

I recently had a conversation with a young man in medical school. We spoke of whether or not he, being an atheist, would ever conduct an abortion. He visbily recoiled in horror, shocked that I might even broach the possibility. He could not comprehend how anyone taking the Hippocratic Oath would then participate in an abortion. He may be an atheist, but he is a person of integrity who knows the power of keeping one's word.

in partibus infidelium:
Keep admiring the Pope- you won't go wrong, he is the Vicar of Christ and his Office does indeed bear witness to the truth.
Keep searching for the truth, my friend,God will bless you for it, and reveal it to you, maybe sometimes in ways you don't expect!
I will remember you in my prayers.

Thank you George and Miss Book, I am grateful for your prayers. As you say truth comes before unity, and unity can only be on the basis of truth. I am glad that I am made so welcome here.

Thank you also Fr Blake for your comment.
I can remember an article in the "Times" published just after the election of John Paul II when he made it perfectly clear that Vatican II should be interpreted in the light of Vatican I and not vice versa.

In partibus infidelium, I'll pray for you too, I'll remember you Mass.