Obama's Lure of the Religious Vote 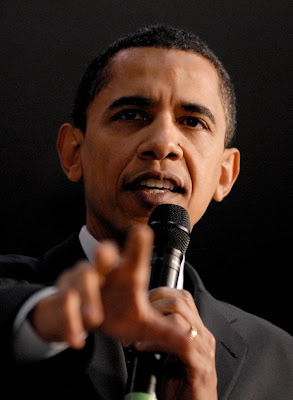 I found this short article from the Wall Street Journal entitled "How Obama Lured Millions of Religious Voters" fascinating. I must say what I find truly remarkable about Obama is his use of rhetoric, of presenting the sheer "feel good factor", of communicating a sense of hope. His style reminds me of evangelical preachers, he is definitely a secularist but has a remarkable gift of getting millions to put their faith in him. I am sure that his greatest difficulty will be sustaining this faith and hope. When they do so, so, I think will the love, or at least affection that lead many of those first time voters who supported him.
This side of the pond we saw a similar thing with Tony Blair, but in the US things move faster.

He emphasized reducing the number of abortions.
As the campaign went on it became clear that many moderate evangelicals and Catholics agreed with Sen. Obama on the economy and the Iraq war but couldn’t get past his consistently pro-choice views. As conservatives hammered Sen. Obama on his opposition to the born alive bill, he could see moderate evangelicals and possibly Catholics slipping away. At the urging of progressive pro-life activists, the campaign began talking about an “abortion reduction” agenda — helping reduce unintended pregnancies through education and birth control, and providing financial assistance to pregnant mothers to make it easier for them to carry a baby to term. They included language in the Democratic platform suggesting as such, and Sen. Obama touted the idea in a few comments during debates. Dial-ometers soared when, during the third debate, he emphasized common ground on abortion and “sacred sex.”
As the election approached, antiabortion progressives ran radio and TV ads pushing the idea that one could be pro-life and pro-Obama.

There was never an "agressive push by pro life bishops." - or if there was it, was drowned out during Sunday Mass by missionary priests praying for special intentions that: whoever is elected may hear the cries of the poor, etc. If that wasnt an endorsement, I dont know what was- with nary a word for pro-life intentions.

It would be difficult for anyone to get elected who promised a total ban on abortion - say in cases where the mother's life was threatened, or incest or rape as that just seems unreasonable to most people (rightly or wrongly).

I was interested to read in one of the links that Obama said he would support a ban on late-term abortions if an exception for the health of the mother was made (I must somehow of missed that in the debate) which seems much better to me (surely it would mean less abortions at that late stage full stop) than the "born alive" legislation, but that the Republicans are so committed to banning abortion altogether that a compromise is not possible. I think that is unfortunate.

Thanks for the post, Father, fascinating stuff. I was a real McCain-Palin-o-phile during the campaign, but being British didn't have a vote, so somewhat pointlessly!! I suppose I could soften to Obama (he is quite a remarkable orator as you say), but it is a case of waiting to see whether he really is as centrist and consensus building as he appeared late in the campaign or whether he returns to his more leftist policies with which he began his fight for the nomination.

Probably remiss of me but I did not have a clue about O'Bamas voting history or what he was about before the result came through,I thought he held his own in the debates very well and appeared to be very articulate.

Even with his supposed stand on ABORTION he still came across as the safest pair of hands to run that great country the USA.

Sarah Palin was about the biggest blunder anybody could make and on this side of the pond we know what damage can be wrought by a MADWOMAN,we are still paying the price for that grotesque mistake.

My guess is that O'Bama was playing to the gallery and that he will turn out in the end to be a Godsend and the billions around the world who celebrated the defeat of the warmongering criminals will be proved right.

"Sarah Palin was about the biggest blunder anybody could make and on this side of the pond we know what damage can be wrought by a MADWOMAN,we are still paying the price for that grotesque mistake."

Quite. One Orthodox archimandrite I know described our MADWOMAN as a "Jewish, working-class, witch." I must elicit his views on the Palin woman. I have no doubt the Palin woman was the major reason for Senator McCain's failure.

I liked Sarah Palin. I still do, in fact. It is a pity that she has been taken away from the Catholicism which she was baptised into, but she certainly is a religious woman, she is certainly pro-life and pro-family.
She is a happy, balanced, ordinary woman. She has endured a sustained campaign of ridicule from the media who stand as completely the opposite of all that she stands for. Certainly , having come through this hate campaign she will be all the more able to face the quite satanic forces who aligned themselves against her this time. I really do hope that she stands for the Presidency in 2012 as I strongly suspect that the messianic aura which has cloaked the incoming President, will have been totally stripped away by that time. Then, indeed, there well could be the real change needed by America and perhaps, then, the world will become a better place. I certainly do not expect such an outcome in the next four years. In fact, I expect that the outcome will be exactly what the world, as a whole, will come to rue.

My eldest daughter will qualify God willing as a doctor in less than 2 years. She is an ardent pro-lifer..praise God.

The Telegraph today mentions that one of Obama's speechwriters is an English Lib Dem. Apparently he tried to echo speeches like Lincoln's Gettysburg address.

I find all this rhetoric rather overblown. I also saw echoes of St Crispin's Day (Henry V) in the acceptance speech. There's something creepily messianic about all the hype.

I feel Obama is an unknown quantity and doubt the euphoria will last. Still, at least it's not Hillary.

You are seriously naive if you don't know by now that the "except for the mother's health" clause prattled about by liberals is a BLANKET gimmee for abortion on demand. That "life of the mother" garbage includes MENTAL "health."

"Oh, doctor, I just need an abortion because I'm going to go crazy if I have this baby." "Granted."

Obama has accepted the argument that representatives of the people must not act according to religious principle when many of the people do not accept a religious view. In England such a position would have stopped Wilberforce in his tracks and maintained the slave trade. It would have prevented Shaftesbury aguing for Factory Reform and other restraints on trade which the best opinion of the day rejected. In any case it is impossible to have a view on anything which does not imply a worldview, explicit or implicit. In a pluralist society legislators have as much right to act on a religious view as on any other.

People elected a blank sheet of paper with their own hopes and ideas projected onto it. They are going to be very disappointed very quickly.

But he hasn't been slow to stimulate the abortion industry, has he?